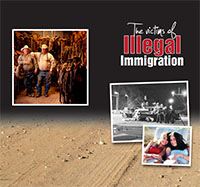 The long hollowing out of America’s once-mighty manufacturing base, which effectively ended the generational tradition of sons following their fathers into jobs that provided a secure paycheck and a pension, has been followed by the in-sourcing of waves of cheap, illegal labor to replace American workers, and, in doing so, suppress wages and benefits.

To the black citizens in south Los Angeles who have watched as their jobs, schools, and communities have been overrun with illegal immigrants, there is a bitter irony in lofty progressive cant about justice for illegal immigrants, even as blacks find themselves again being pushed to the back of the economic bus.

Political gains by blacks in Southern California, that were secured over many decades of struggle, now face their own twilight as the sweeping demographic shift eventually eliminates black voting power in communities across the southland.

Two or three generations deeper into this crisis, the real question will be what citizenship will be worth. What cherished hallmarks will the designation “American” hold?

Like the microcosm of Southern California, it will be a nation that is brimming with people struggling to survive, and yet with even less of a cohesive sense of a national identity – of just what an American is – than at any other time in the country’s history. The meaning of American will simply be whatever one wishes it to be. Instead of a bedrock sense of ideals and values, it will be malleable, transitory, written in chalk.

Ironically, far from bringing more people closer to the “American Dream” (that once-perennial hope which defined a country and provided more opportunity for its citizens than any other nation on earth), it will now be further away than ever before for most of its people.

California’s grim fate should serve as a warning for the rest of the nation. There are towns, counties, and states that are experiencing, like California did in the late 1980s and early 1990s, exploding populations of illegal immigrants that are reshaping their communities, their culture, and their quality of life at a pace and on a scale that would have been unimaginable a generation ago.

In places like Pennsylvania, Arkansas, and Georgia, the future is being decided today.

If American citizens cannot muster the political will to act decisively to preserve their overarching culture and the quality of life that was passed along to them after so much sacrifice across the 20th Century, then they will find themselves in the same terminal condition that California is in today – an inglorious ending for a nation whose lamps once burned so brightly with promise.

Mark Cromer is a widely-published journalist. This was excerpted from “California Twilight: A Native Bears Witness to the End of the Golden State,” www.noozhawk.com.

1 thought on “Victim: The Nation”