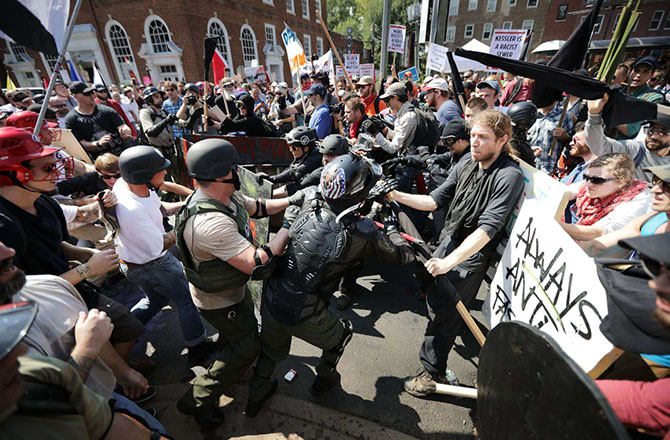 UPDATE: Heather Heyer was not a member of the Industrial Workers of the World anarchist organization:

Rest in power, #HeatherHeyer. Not an @_IWW member. Her courage was her own. Honor her memory by helping the struggle against fascism.

It has been reported ad nauseum that alleged Charlottesville killer James Alex Fields Jr., 20, is a white supremacist. But high school teacher Derek Weimer revealed among other things, that James Alex Fields Jr., who reportedly slammed his vehicle into a group of protesters at the infamous Unite The Right rally in Virginia over the weekend, was diagnosed with schizophrenia and “had been prescribed an anti-psychotic medication.”

No stranger to violence, the “admirer of Adolf Hitler and Nazi Germany” also “was arrested and put in juvenile detention after his mother reported in 2011 that he stood behind her wielding a 12-inch knife.”

It is not clear if James Alex Fields Jr. is still medicated.

Do you think his schizophrenia had anything to do with it?

Do you think his #Schizophrenia had anything to do with it?

While the mainstream media seemingly collaborated to uniformly describe Antifa, the Democratic Socialists of America (DSA), the International Socialist Organization (ISO), Industrial Workers of the World (IWW), Black Lives Matter and others as “counter protestors,” the individuals who came to protest the “Unite The Right” rally are communists and their allies.

Excuse the brevity, but it is way past time that Americans – including conservatives – recognize that communists exist and they have power. This discussion is important – vital, in fact.

The unfortunate victims of James Alex Fields Jr. were communists and their allies. At least the ones that this author has been able to find so far.

By the way, did you know that “clergy” can work with the Antifa?

Let’s agree that Heather Heyer was brutally murdered by a mentally ill white supremacist in what could be described as a domestic terror attack (Is it still a terror attack if the perpetrator was mentally ill?). But what the mainstream media leaves out, and they should NOT leave it out, is that Heather Heyer was likely a member of the Industrial Workers of the World (a.k.a. “Wobbly”)

According to the Urban Dictionary, “Many wobblies subscribe to some form of anarchism.”

The Preamble to the IWW Constitution reads in part,

“Instead of the conservative motto, ‘A fair day’s wage for a fair day’s work,’ we must inscribe on our banner the revolutionary watchword, ‘Abolition of the wage system.’

It is the historic mission of the working class to do away with capitalism. The army of production must be organized, not only for everyday struggle with capitalists, but also to carry on production when capitalism shall have been overthrown. By organizing industrially we are forming the structure of the new society within the shell of the old.” (author emphasis)

Heather Heyer was a “strong woman,” a paralegal, “brave,” but she was also a revolutionary.

Don’t let the media erase the fact that Heather Heyer, the woman killed at #Charlottesville, was a member of the @_IWW. She was our comrade.

Says the capitalist hoping to capitalize on the death of a comrade, not mentioning that Heather Heyer was a Socialist and an IWW member. https://t.co/lD5WMt0Jph

Heather Heyer was a socialist working with IWW. Stop erasing her.

Two of our members are confirmed hurt in Charlottesville with a leg injury and a concussion and thankfully recovering and being discharged.

The #WhiteSupremacists in #Charlottesville murdered a comrade from the #IWW and injured 2 DSA members. The fascists won’t win #defendcville https://t.co/nh9K9JFWtT

Isn’t it funny that the mainstream media, with all of their resources, is not interested in the fact that James Alex Fields Jr. has schizophrenia or that his victims were communists and their allies? Why do you think that is?