Margaret Trawick is Massey University Professor in Social Anthropology in the School of People, Environment and Planning. She teaches the the anthropology of gender.

Mags is a Marxist-Feminist who doesn’t seem to like men very much.

From the Marxist-Feminist Net March 9th 2000

Women and girls do 2/3 of the world’s work for 5% of the income.
So when women stop everything stops.

…. and everyone starves. Don’t you think women know that? This is why
we cannot go on strike. Be glad we don’t kill every one of you f###ers.
All we need to perpetuate the species is your sperm.

Funny that Marx didn’t think about this.

Unless they are Tamil Tiger terrorists.

I specialise in Tamil society, culture and language. I have been researching the Tamil Tigers in Sri Lanka for the past seven years, and I’ve taken several field trips there.

Margaret Trawick, stayed with Women Tigers in the Liberation Tigers of Tamil Elam (LTTE) controlled areas. She is a staunch advocate for the LTTE cause and is plugged in to the international Tamil Tiger support network.

Margaret described an incident involving an American businessman and Sam Thambimuttu MP for one of the Tamil militant groups the EPRLF and what she called a “Prawn project”. The exact details were confusing, but according to Margaret, the EPRLF MP tried to play out the Tamils and in the end 85 people were killed and the “Prawn project” was destroyed by the STF. How ever she did admit that there was a LTTE involvement as well.

Trawick’s loyalty to the Tamil cause and antipathy to the Sri Lankan government is beyond doubt.

The LTTE did not protect Sivaram. Those ghouls who say that he was an “LTTE terrorist”wallow in their blindness. Sivaram was not a terrorist. The LTTE are not terrorists and Sivaramdid not belong to the LTTE. He could not be a war-maker because he trusted everybody. He talked with everybody. He wore no armor and neither carried nor kept any weapons. And the head of the LTTE was right to confer upon Sivaram, posthumously, the title of Maamanithar. I only wish they had protected him better during his life. Because, despite what the ghouls may say, the LTTE in no way benefits from the death of Sivaram. He was their best international advocate.

Today Trawick spoke at Auckland University in support of the Tamil cause; 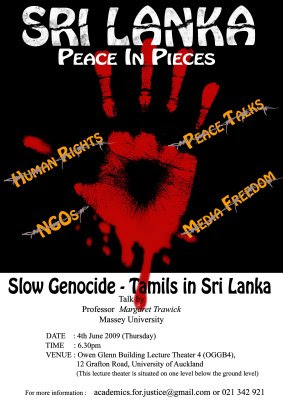 Recent events in Sri Lanka are just the latest chapter in a long and tragic story. In a talk at the University of Auckland next Thursday, anthropologist Margaret Trawick will discuss the history of oppression that Sri Lanka’s Tamil minority has suffered, and explain why she believes that this oppression amounts to a ‘slow genocide’. Trawick has worked as an anthropologist amongst Sri Lanka’s Tamils, and has witnessed firsthand the efforts of the Sri Lankan government to destroy their culture, language, and physical heritage.

Yep-seems to be the more of the balanced, rational analysis that is so typical of our Mags.