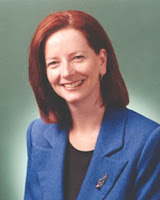 If likely deputy Prime Minister Julia Gillard has anything to do with it, I’m betting the answer will be yes.

ALP deputy leader Julia Gillard was the centre of controversy in the last few weeks, after Federal Treasurer, Peter Costello exposed her past ties to to a Communist Party linked organisation, Socialist Forum.

Initially Gillard admitted her association, but played it down.

TONY JONES: Are you now or have you ever been a member of the Communist Party?

JULIA GILLARD: (Laughs) Tony, I think that question shows how silly all of this is getting, though I suspect in this interview, probably the Howard Government would think you’re the dangerous radical. After all, I’m only from the Labor Party, you’re from the ABC.

TONY JONES: Well look, seriously, Peter Costello has thrown this out. Let’s deal with it properly. What’s the Socialist Forum? Were you an organiser for it? And when did that happen, if you were?

JULIA GILLARD: Tony, it’s 2007 and I’m a 46-year-old woman. What Peter Costello is referring to is more than 20 years ago when I was in my 20s. I was a full-time university student and I had a part-time job for an organisation called Socialist Forum, which was a sort of debating society. It ultimately amalgamated with the Fabian society, which of course is a long-running ideas and debating group in Australian politics and indeed in British politics before Australian politics. I’ve worked in the cleric and administrative work.

TONY JONES: It wasn’t a front organisation for Communists?

JULIA GILLARD: Certainly not. It was an organisation where people who identified themselves as progressives, some in the Labor Party, some outside the Labor Party, would come together and would talk about ideas. I did clerical and administrative work, Tony. This is so long ago. It’s the days before modern computers and the internet, in the days where if you wanted to put out a meeting notice to people you wouldn’t send an email, you’d get out an envelope and put it in your IBM electric typewriter and type up the address and then get the next one. That’s the sort of thing I used to do.

Julia Gillard’s vagueness with Tony Jones is surprising, as a week before the Sunday herald Sun’s Lincoln Wright had published this story on News.com.au

SCRAPPING the ANZUS treaty, twinning Melbourne with Leningrad and introducing a super-tax on the rich were among radical policies devised or backed by Julia Gillard as a student activist.

Labor’s deputy leader was a key figure in a socialist group that pushed radical policies and social agendas in the 1980s and early ’90s.

Founded in 1984 as a pressure group within the ALP, the Socialist Forum also wanted to sever Australia’s alliance with the US, remove the spy base at Pine Gap, introduce death duties and redistribute wealth from the rich to the poor.

The Sunday Herald Sun has gained access to the forum’s archive – held in the Baillieu Library at the University of Melbourne.

The archive contains material revealing the radical past of Ms Gillard, including her links to former members of the Communist Party of Australia.

Ms Gillard, who could be Australia’s next deputy prime minister, was on the management committee of the forum for many years. She acted as its public officer, secretary, and legal adviser on the drafting of its constitution.

Her signature is on liquor licence applications for the forum’s social events, such as theatre nights.

In a pamphlet from the mid-1980s, Ms Gillard describes herself as a “socialist and a feminist” and someone who joined the ALP at 16.

“Contrary to what may have been suggested, Socialist Forum is not a secret organisation nor is it a sub-caucus with the Socialist Left,” Ms Gillard says in the pamphlet.

The 200-plus member forum sought to influence Bob Hawke’s Labor government, especially on foreign and economic policy, through the free discussion of ideas.

One key document is the 1985 “Pine Gap – Planning a Strategy”, drafted by Philip Hind, who recommends a long-term policy of abrogating the ANZUS Treaty, removing Pine Gap and eventually closing all US bases.

Mr Hind visited the former Soviet Union and came back praising the reforms of president Mikhail Gorbachev. He recommended stronger ties with the USSR, including making Melbourne a sister city of Leningrad (now St Petersburg).

The archive also reveals the forum’s debate over tax policy was based on a Communist Party tax pamphlet titled “A Case for Radical Tax Reform”.

“We argue that there is only one effective way to reform the tax system, by a sweeping redistribution of the tax burden which now hits hardest at low and middle-income earners,” the pamphlet says.

In reality Socialist Forum was almost wholly a vehicle for former leaders of the Communist Party. I quote Australian Marxist-Leninist paper Green Left Weekly from an article from 30th November 1994 on late Communist Party of Australia leader Bernie Taft.

The end was in sight by the early ’80s, and Taft, most of the Victorian leadership and a quarter of the CPA National Committee departed to form Socialist Forum, an ALP ginger group. The rest of the CPA slowly folded over the remaining years of the decade.

JULIA GILLARD: I’ve been predominantly asked about the time I worked there and so I’ve talked about that, I’ve answered all of those questions. What happened is I worked there for a period of time when I was at university. I then finished my university career and moved into my legal career. To do that, I did the course you could do instead of being an article clerk, Leo Cousins; that was a full time course and to support myself through it I waitressed three nights a week. And then I went and got a job at Slater and Gordon, worked pretty hard there, made partner in three years. So whilst I kept a membership of Socialist Forum, I sort of drifted out of active involvement with it. So yes, I would have attended the occasional meeting, but…

NEIL MITCHELL: When would you last have gone to a meeting?

JULIA GILLARD: Oh, look I really couldn’t tell you that, honestly Neil but a very long time ago. In the sense that as my legal career got more and more intense, as a partner I didn’t have time left over for other things, so…

NEIL MITCHELL: So were you on the Management Committee until 1994 at least?

JULIA GILLARD: No, it petered out, what…

NEIL MITCHELL: Well, it sort of became the Fabian Society, didn’t it?

JULIA GILLARD: Yeah, what happened is, its membership went into decline – it was only ever a very small thing. You know, its membership went into decline. It entered an arrangement with the Fabian Society and what was then the Evatt Foundation in Victoria which was also a bit of an ideas think tank. Entered an arrangement to share offices and share costs and all the rest of it. That happened in 1997, I think. And sort of slowly after that the Forum petered out. And now…

NEIL MITCHELL: Did you…

JULIA GILLARD: …people who want to join that sort of thing join the Fabian Society.

NEIL MITCHELL: So are you a member of the Fabian Society?

JULIA GILLARD: Yes I am.

NEIL MITCHELL: And what, you just sort of went from Socialist Forum to Fabian Society?

JULIA GILLARD: I hold a membership of the Fabian Society, I do support people getting together and talking about ideas. I think that’s all to the good.

JULIA GILLARD: I, obviously, with all my responsibilities am not a regular attendee at Fabian Society events…

JULIA GILLARD: They generously invited me to address their recent dinner which I did.

Julia Gillard was still listed as a member of Socialist Forum as late as 2002.

As Julia Gillard is only one of many leading ALP figures from left/union backgrounds, I’m betting Australia is about to undergo a leftist shift in foreign policy similar to that suffered by New Zealand in 1984.

Domestic and monetary policies may also shift to the left as the ALP lacks the Roger Douglas faction that moderated New Zealand Labour’s left extremism in 1984/90.