If you want to know why Maori radicals and anarchists were running around the Ureweras with guns and napalm-ask this man.

Marcos has yet to reveal his true identity, but Mexican authorities claim he is Rafael Sebastián Guillén Vicente, a son of Spanish immigrants, born in Mexico.

Caught up in the student radicalism of the late ’60s, Guillen joined the Maoist oriented guerilla group, the National Liberation Forces.

In the early ’80s, Guillen and some of his followers moved to Chiapas in southern Mexico to work through the local Mayan peasantry.

From the US Military Review May/June 1997;

Cadres of what became the EZLN began to secretly organize in the early 1980s. The EZLN claims it was founded in 1982. Formed in part by members of old splintered groups and drawing on a predominantly indigenous following, EZLN’s evolution was complex and is still debated. During its formative years, the group gave little indication of its existence, a posture that fit well with most Mexicans’ perception that guerrillas were an issue of the past.

However, the guerrillas were not gone from every area of Mexico. Reports of secretive armed groups training in the mountains were as commonplace locally as they were heatedly denied by Mexican authorities…

On 1 January 1994, 15 years of official government and public complacency ended abruptly when the EZLN publicly announced its existence with the brief occupation of several towns in Chiapas, resulting in sharp clashes with the army that left nearly 150 dead.

Since the initial rebellion, Marcos’s Zapatistas have formed a semi autonomous state in Chiapas and have worked to build bridges to radical and anarchist groups throughout Mexico and the world.

The Zapatistas have proved masters of communication and have spread their ideology to indigenous and anarchist groups worldwide via the internet and regular international conferences.

From 1992 through 2006, Marcos wrote more than 200 essays and stories and published 21 books in a total of at least 33 editions, amply documenting his political and philosophical views…

Although Marcos’s political philosophy has sometimes been characterized as “Marxist,” his broadly populist writings concentrate on unjust treatment of people by both business and the State, giving Zapatista ideology a strong anarchist tinge.

In 2005, Marcos launched the “La Otra Campaña” (The Other Campaign) to coincide with the 2006 mexican elections. The Zapatistas did not run or endorse candidates, but instead called for a new constitution prohibiting privatization of public resources and providing autonomy for an estimated 57 indigenous populations. More than 900 organizations joined The Other Campaign. 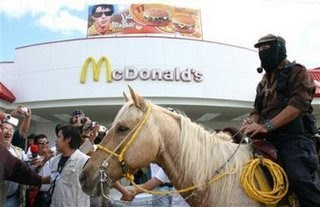 Subcomandante Marcos is an icon for the new anarchist/indigenous and anti capitalist left that has disrupted nearly every major international political and financial gathering since the Battle in Seattle in 1999.

It is no so surprise that he is admired by many of those arrested in the New Zealand “anti terror” raids of October 15th.

3 thoughts on “Who Is Subcomandante Marcos?”

The Great Reset: Joe Biden And The Rise Of 21st-Century Fascism
2022-01-23  1 Comment
By: Glenn Beck | BlazeTV https://www.youtube.com/watch?v=bbNcx4rsAfk The Great Reset is the name of the 50th annual meeting of the World Economic...

American Surrender In A War With Russia/China
2022-01-21  0 Comments
By: Cliff Kincaid | America’s Survival https://www.youtube.com/watch?v=silWAGVO22A&t=13s Geopolitical analyst J.R. Nyquist examines how the Third World War is breaking out in...