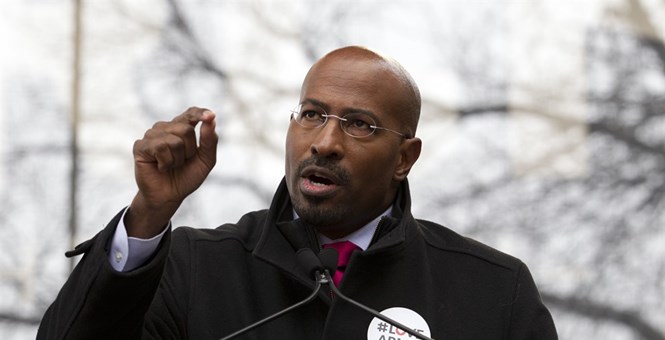 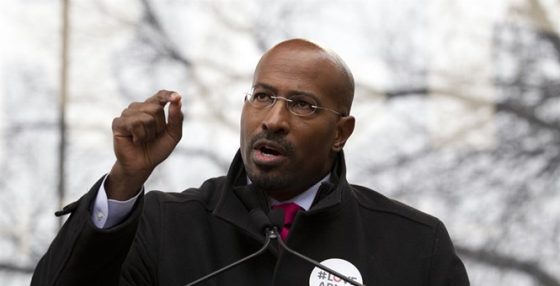 In the wake of the Parkland, Florida high school massacre, it was only a matter of time and opportunity before the left was going to bring race into the issue. It’s one of the standard weapons used by Marxists. Lo and behold, enter commie Van Jones on CNN. He’s the perfect guy to do this. And bonus, he ties it to the National Rifle Association.

After the shooting, President Trump stated that his administration was seriously considering training and arming teachers to protect students. This caused the left to lose their ever-loving minds. The most outlandish of which was Van Jones stating that we can’t arm teachers… because they are inherently racist. Yesterday, Van Jones got together with Don Lemon and contributor Ken Cuccinelli to debate gun control and the prospect of arming willing educators in classrooms to defend America’s schoolchildren.

“No, you’ve spoken a long time.” Lemon said dismissively. “The SRO had a gun and didn’t use it. To add more guns to an environment — we keep saying the problem is mental issues, the problem is this, the problem is that. In every study, the only reason this happens is because we have so many guns in this country, too much access to guns.” Bull crap. That’s not the issue at all. If someone wants to kill, they are going to find a way. The solution is to have armed security guards and teachers in these schools. In essence, the answer is more guns, not less, to harden soft targets like schools. See Israel.

“Every single country, other than the United States, does not have this problem,” Lemon stated. That’s an absolute lie. He went on to say, “and the only reason, and we should be honest about it, is that we have too much access to guns. Not that guns need to be confiscated or we need to get rid of them, but it’s too much access to guns. If this person did not have an access to a gun, this would not have happened, bottom line.” Yes, it would have. He would have used bombs, knives or something else to kill with. And it doesn’t matter if he has access to guns or not… if he really wants one, he’ll get one.

“In Washington, D.C. you have some of the most restrictive gun laws in America,” Cuccinelli responded, attempting to inject reason into the conversation, “and it’s certainly a land of peace and harmony. All the people doing the killing are illegally obtaining the guns. The notion that’s going to happen isn’t the solution and you brush aside the idea that other responsible people who have shown a commitment to these children might be willing to undertake that responsibility.” Exactly. He also brushes aside constitutional rights and freedoms because it serves a political agenda. A communist one, I might add.

“Most of the people who have guns are responsible and use them responsibly,” Lemon said. “That is not the issue and you’re conflating two different issues. That’s not the issue. But, do you need a military grade weapon on the streets of the United States [note: an AR-15 is not], anyone who is not a police officer or who is trained or licensed to use it? No, we don’t need that. Why do we need to have that silly argument and pretend that it’s anything other than our access to guns?” Yes, and who defines ‘military grade’? They use hand guns in the military too. What Lemon and leftists want is all guns banned, period.

“If it’s a silly argument, then it’s not an argument at all,” Cuccinelli added. “Ken makes a good point in talking about, let’s have an open mind and let’s have a full conversation,” Van said. Which is not what he meant at all. “An open mind, though, Van, doesn’t mean being stupid. Let’s be honest,” Lemon added. “I’m trying to go somewhere with that,” Van Jones said. “Let me try to lay out what I think the concern is with the idea that we would be adding guns to that environment. Ken, you’re pointing out the positives. The positives are maybe someone would use that gun to stop an intruder.”

“There are some real negatives as well,” Jones went on. “African-American and Latino kids already get treated fairly badly in schools as it is. They’re more likely to see as a threat, more likely to be suspended for the exact same behavior. Videotape. Exact same thing. This kid is a threat, this kid is a class clown if he’s white. Now you have African-Americans coming out saying, ‘if you just start passing out guns in schools as they are given some of the bias that’s there, you might end up having those guns used against students in ways that are not good’,” Jones argued. In other words, the teachers are racists and would use the guns against their students of color. Just wow.

Jones said the NRA’s role in the debate over gun policy has been destructive overall, arguing that lawmakers are afraid to take steps to solve gun violence because the group may criticize them. Jones admitted, however, that he does not know what steps the government could take to make any progress. “We haven’t had the kind of innovation, experimentation, trying of things—I don’t know of any of the things being proposed would make any difference at all yet,” Jones said. “But we should know more than we know right now. We should have been able to try things and we haven’t been able to.” Oh, yes you have… every progressive move has made it worse. We need common sense, not more liberal solutions.

“You have a whole generation of young people who essentially see the NRA as their enemy,” Jones said. “To them the NRA is like the KKK; it’s just some hostile force that is against them, that’s risking their lives. These kids, they’re not fighting for their future—they’re fighting for their right to survive, to have a future,” he said. “They do not see the NRA as a friend in that fight.” And they see the NRA that way because leftists have brainwashed them into seeing them as the enemy. That certainly includes Van Jones.

2 thoughts on “Commie Van Jones: To Young People, ‘The NRA Is Like The KKK’”