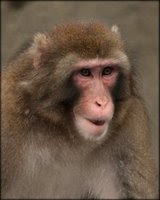 Every week on Monday morning, the Council and invited guests weigh in at the Watcher’s Forum with short takes on a major issue of the day. This week, we have a special edition featuring the 2008 Democratic Presidential candidate and well-known political guru, Weekend Monkey, to tackle this week’s question: What will be the final results of the 2012 Senate Elections?

RM: Hello Monkey, and thanks for joining us. So, it’s 30 days out. Let’s do some handicapping for the 2012 Senate races.

RM: By the way, in passing I want you to know we got really mixed feedback on your interview with Elizabeth Warren. Some people felt it was too personal.

WM: So what? They can bite the rotten banana.

RM: Exactly what I expected you to say. So, let’s start there… does she win?

WM: Lemme tell ya Rob. The word here is ‘coattails.’ That applies to a lot of the more interesting races. If Romney the Robot wins, he’s going to drag a few ReThugs with him. If Jug Ears takes it, some of my Democrats are gonna be sitting pretty in the Senate.

WM: Yeah, yeah… but by how much? That’s the question. If Romney gets a decent showing downstate, it might be enough to put Scott Brown over. If not, my pal Elizabeth Warren is going to be the next Senator from Mass.

WM: 8 to 5, Warren, just because it is Massachusetts. If any of you primates out there want to lay on Warren straight up against a house bet of Brown plus 3, I’ll gladly take your hard earned shekels.

RM: Which races do you see real coattails races?

WM: A lot of ‘em, but these four: Ohio, Wisconsin, Virginia and believe it or not, Connecticut, especially so. In Ohio, you got incumbent Sherrod Brown against Josh Mandel, Tammy Baldwin against ex-Rethug governor Tommy Thompson in Wisconsin, George Allen, Mr. Macacca against ex-DNC primate Tim Kaine in VA and in Connecticut, ex-WWF babe Linda McMahon against Rep. Chris Murphy. Those races are all effectively tied and will probably go for whichever primate takes the state in the presidential smackdown.

WM: Obama will take Connecticut, but the question is by how much. McMahon ran before and people know her statewide, whereas a lot of CT primates never heard of Chris Murphy before. Also, she’s got plenty of moolah. I wouldn’t be surprised to see McMahon body slam Murphy and make this a ReThug pickup, but not if Obama wins in a blow out. I’d call it maybe 3-5, McMahon.

Ohio is anybody’s call. Josh Mandell is a wingnut ex-serviceman aside from being Jewish, and Brown is an incumbent who pretty much swings on the same branch with Obama. I mean, if Obama made a right turn without signalling, Sherrod Brown would be wearing a neck brace, hee hee hee!

At one point, Brown was like, ten points ahead but things are all tied up and I’m hearing disturbing things about vastly decreased Democrat voter registration in our strongholds like Cleveland. I’m gonna wait and see if this trend continues before I put any shekels on it, believe me!

WM: Another one that’s too close to call. I’d give a slight edge – very slight – to Macacca Man, because he was a senator before and because it’s Virginia, but if Obama takes the state, Tim Kaine will be the next Senator.

RM: There’s a big scandal brewing in Virginia about the failure to get military ballots out on time.

WM: Same like in 2010. We Democrats are nothing if not consistent.

RM: Doesn’t that bother you?

WM: Hee hee, you wing nuts! I keep tellin’ yah… it doesn’t have to make moral sense or common sense as long as it makes political sense…

RM: There’s the political animal I know so well.

WM: You betcha! Okay, Wisconsin. Now, I grant you, Tammy Baldwin is a creature of Dane County and as red as they come, but she’s slightly ahead. Because of Tommy Thompson, who the ReThugs were begging to run finally agreed, but he’s coming across as a tired old geezer. I mean, he’s over 70 and it was over twenty years ago since he last won a statewide race. I hear they have a handler whose only gig is to poke him with a stick now and then when they see the cameras on him so he looks a little lively.

WM: Hey, I call’s em like I sees ‘em Rob. Okay, okay, he’s not quite that out of it, but he’s still coming across like a blast from the past. The only way I see him winning is if somebody slips Viagra in his coffee or if Paul Ryan helps Romney the Robot take the Badger State decisively. I’ll call it for Baldwin right now, but that could change.

WM: I see the ReThugs hanging on to John Ensign’s Nevada seat. Dean Heller already has the job, he’s not making any stupid mistakes, Shelly Berkley has some ethics violations hanging over her head and the Vegas Review-Journal just endorsed Romney. 5-3 Heller, unless Obama blows out the state. Which I doubt.

In Florida, Connie Mack is running an average of 4 points behind Democrat incumbent Bill Nelson, but that race has tightened up since the Empty Chair debate, so it’s too close to call. I think Romney the Robot has a decent chance to take Florida, but it’ll be close and I can’t say whether it’ll be enough to push Mack over the top. With the polls tightening up, maybe. Too close to call.

WM: Hee hee! The primates in Missouri have a real choice! Who do they vote for, a Dem who’s ethics challenged, votes with Obama and used a state plane for personal trips she charged to the state, or a giddy lil’ ReThug redneck with his foot constantly in his mouth! Ah hee hee hee hee! I betcha if they had a none of the above choice, that would be their next senator.

RM: This reminds me of Pat Caddel’s thing about the corrupt party and the stupid party. Maybe you should have run. It’s like North Carolina, I told you you could have been the Democrat nominee instead of Alvin Greene…

WM: Eh! Too late now. Anyway, I think the corrupt party wins this one, if nothing else because it’s gonna be close enough that McCaskill’s connections with the St. Louis machine could put her over. But anything could happen. Remember, this is the state that actually voted a dead guy into the senate.

RM: True enough! Akin has shown surprising resilience, but he’s still down in the polls, so you may be right. Just to wind it up, your overall call for the senate?

WM: I wouldn’t be at all surprised to see it split, with whoever the VP is spending a lot of time tie breaking. I think that’s where we’re headed. Or maybe 49-50, Democrats. Thanks, Mr.Akin! Of course, if Romney wins big, you could see the Rethugs mark their territory in the senate again. Thirty days out it’s pretty tough to make an accurate call.

RM: We’ll get together and take another look closer to the finish line. By the way, you still booking election bets?

Weekend Monkey was a Democratic candidate for president in 2008 and is JoshuaPundit’s political Guru. He can be reached at wendmonkey@yahoo.com.

Make sure to tune in every Monday for the Watcher’s Forum. And remember, every Wednesday, the Council has its weekly contest with the members nominating two posts each, one written by themselves and one written by someone from outside the group for consideration by the whole Council. The votes are cast by the Council and the results are posted on Friday morning.
It’s a weekly magazine of some of the best stuff written in the blogosphere and you won’t want to miss it.