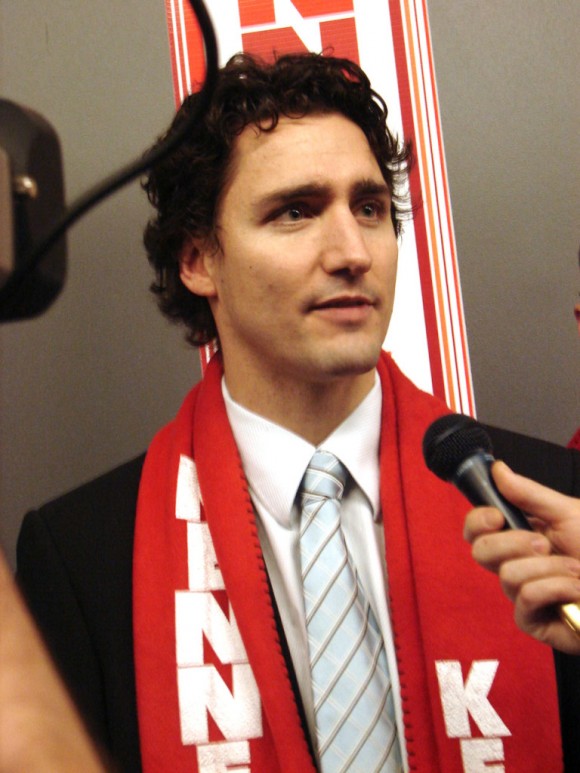 In typically biased fashion, Time magazine has greeted the defeat of Canada’s conservatives with the headline, “Why Justin Trudeau’s Election Is Good News for the Fight Against Climate Change.” But the story has a valid point which bears on the question of why Obama campaign operatives were deployed to subvert the conservative government of Stephen Harper. Obama expects new Prime Minister Justin Trudeau to help promote a climate change treaty to overthrow global capitalism that is expected to come out of a United Nations conference in Paris in December.

But another inevitable outcome of the liberal victory may be more Islamic terrorism in North America. The new Canadian prime minister has extended open arms to Muslims in Canada and more immigration from the Middle East while declaring the need to withdraw from the fight against Islamic terrorism.

A pro-abortion Catholic, Trudeau wants to legalize marijuana and establish more injection sites for heroin users around the country.

If you hadn’t heard about Obama’s campaign to destroy Canada’s conservative government, you missed our story from last week, “Obama Plans Takedown of Another U.S. Ally.”

The destruction of Harper wasn’t as bloody as the Obama/Hillary Clinton effort to overthrow Moammar Gadhafi in Libya, which resulted in the Benghazi murders of four Americans. Nevertheless, the overthrow of the Harper government had the fingerprints of Obama all over it.

Judi McLeod of Canada Free Press, one of my key sources in last week’s article, summed it up in a story with the headline, “Obama Campaign Team Hands Canada Over to the Lib-Left.” She notes, “When word first leaked out that key Obama campaign workers had joined the Trudeau election campaign, the mainstream media continued to look the other way.”

But there’s no reason for conservatives in the U.S. media or Congress to look the other way.

Commenting on misleading polls that underestimated the liberal tide, McLeod said, “What happened was similar to the 2012 Barack Obama victory over Republican Mitt Romney, with a poll-portrayed nail-biter election that turned into an 11th hour landslide for Obama.”

This is a warning for conservatives in the U.S. who think the pendulum is swinging back to them in 2016. Four years ago many of the top commentators at Fox News and Salem Radio thought Romney was a sure winner. Their faulty predictions have not blunted their drive to be “experts” again this time around. Many of them have already missed the significance of the Donald Trump phenomenon and its staying power.

On the left, the progressive machine is on a roll, from Britain, where the Labor Party elected a Marxist as its head, to the United States, where Senator Bernie Sanders (I-VT) is enticing what many considered smart young people with promises of free taxpayer-financed college educations.

Canada is the latest evidence that conservatives who think history is on their side are in for a rude awakening.

Writing at the conservative Canadian website TheRebel.media, Hamish Marshallnotes that the get-out-the-vote effort by the Liberal Party and the labor unions supporting Trudeau was impressive. Marshall wrote, “What defeated the Conservatives more than the loss of votes, or the collapse of the NDP [New Democratic Party, the third major party in the race] to the Liberals was the huge number of new voters. Turnout will be in the range of 69%, with 3 million more votes cast than in 2011. The vast majority of those new voters supported the Liberals.”

The situation is bleak in Canada, probably worse than many conservatives would care to admit. The battles over abortion-on-demand and homosexual rights are basically over in Canada, while they continue in the U.S. On social issues, Harper was credited by Canadian conservatives with slowing down the movement for euthanasia. He fought a national day care scheme with tax credits for parents. But that’s been about it.

Giving up on the Conservative Party, some Canadians created the Christian Heritage Party (CHP) to compete and wage a real political battle for traditional values. It is a minor political party that didn’t do very well in the October 19 elections.

Vogel is right: the Harper conservatives were afraid to be bold. They operated as if cultural transformation was a fact of life they could not really change. The Conservative Party had a platform that was vague and based on staying the course, mostly economically.

In tough language, Vogel went on to say, “We elected a government that will make matters worse for the unborn, and other vulnerable citizens, if that is possible. They will open our borders to erase Canada’s Christian heritage. (How many churches did Mr. Trudeau visit compared to the number of mosques he visited?) It is a government that is committed to impoverishing Canadians by increasing taxes (such as the ‘Carbon Tax’ and continuing to run a deficit). It is a government that will not fight terrorism in the regions from which it comes, but will allow terrorists to come to Canada. Then we will have to fight them as they radicalize our youth, blow-up our buildings, and kill our citizens.”

The comment about Trudeau visiting more mosques than churches is significant. This political fact has dramatic implications.

The CHP says that over 50 terrorist organizations are currently active in Canada and that the Canadian refugee and immigration system “is inadequate to secure the nation from the threats posed by terrorism.”

Of course, the United States is also threatened by this problem, which is bound to get worse under Trudeau. Perhaps Scott Walker’s reported off-hand comment about possibly erecting a wall between the U.S. and Canada now makes sense. (Walker did not specifically advocate a wall along our northern border but acknowledged that law enforcement authorities had discussed a possible terrorist threat from Canada).

A viral video posted on but not produced by TheRebel.media was a stark warning about Trudeau’s involvement in Muslim causes. Indeed, it showed a picture of Trudeau reciting the Muslim convert’s “shahada” prayer during a visit to a mosque.

Ezra Levant of TheRebel.media wrote at the Toronto Sun that Trudeau wore a full Arab-style Muslim dress called a jalabiya to the mosque in B.C. called the Surrey Jamia Masjid. Levant explained, “But it’s not Trudeau’s dress that was the most unusual. It’s what he did. He went to the mosque to participate in a religious ritual, called the Maghrib salah. It’s a daily prayer service with a particular meaning. Part of the prayer is called the shahada, which in Arabic means to testify. As in, to testify to the Truth that Allah is the one true God, and Mohammed is his one true Prophet. To say the shahada, in the presence of two or more Muslim males, is the sole requirement in Islamic law to convert to Islam.”

He added, “I don’t believe Trudeau is Muslim. I don’t believe he is anything other than what his handlers and costume designers put in his hands before each public event. And in Trudeau’s case, his senior policy adviser just happens to be Omar Alghabra, the Saudi-born former president of the Canadian Arab Federation.”

Trudeau opposes the fight against the Islamic State. The Washington Post and other media are now reporting that Trudeau “would make good on a campaign promise to withdraw Canada’s jets from the U.S.-led bombing campaign against the Islamic State in Iraq and Syria.” This would seem to be a break with Obama’s policy, except for the fact that Obama’s heart was never in the fight to begin with. Hence, Russia’s Vladimir Putin has stepped in to the void deliberately created by the U.S. President.

U.S. Congressional leaders in the U.S. seem preoccupied with whom to elect as the new Speaker of the House, as well as Benghazi. Those are important matters. But it might make some sense, in terms of oversight of the Obama administration, to launch an inquiry into American political interference in the Canadian elections.

What does possible House Speaker Paul Ryan (R-WI) think about that? Some conservatives want to know.

1 thought on “The Obama Machine Takes Over Canada”