Western lawmakers are confabbing in Utah to discuss taking back their state lands from the Feds. Michele Fiore of Nevada deserves a lot of the credit for getting this movement among politicians and lawmakers rolling. States in the West are tired of being treated like territories instead of sovereign states in the Republic. They are getting ready to take their lands back and it is way past time.

Amid the fiery rhetoric of an addle minded, corrupt Harry Reid, who called the patriots aiding and peacefully protecting Cliven Bundy and his ranch and cattle, domestic, violent terrorist wannabes, the Progressives are forming a federal task force to come after those in the West who want their lands back and want to be left the hell alone. Dean Heller of Nevada is to be commended for slapping Harry Reid down for his and the Fed’s overreach with their thuggish, militaristic moves on Americans.

From The Right Scoop in Dirty Harry’s own feckless words:

Bundy doesn’t believe that the American government is valid, he believes that the United States is a foreign government.

And if anyone thinks by any figment of their imagination what happened up there last week was just people rallying to somebody that was oppressed — 600 people came in, armed. They had practiced, they had maneuvered, they knew what they were doing. They set up snipers in strategic locations with sniper rifles. They had assault weapons. They had automatic weapons. And they boasted about the fact that they put women in children — in fact one retired sheriff from Arizona boasted that he put women and children so that they would get hit first.

So, 600 people. If there were ever an example of people who were domestic, violent terrorist wannabes, these are the guys. And I think that we should call it that way.

That’s rich, Harry Reid has NEVER followed the law. He’s a Nevada good ole’ boy who has lined his pockets for decades with stolen money from the people of Nevada and Americans in general.

Picture 200 armed to the teeth Federal agents facing off with cowboys on horseback. Dana Loesch is right, Reid wants to incite a confrontation and stoke the fires of violence. None of us want violence; we want our land and Constitutional rights respected. The violence is being brought by the Federal government forcing Americans to kneel before a dictatorship. Reid was nowhere to be found until this was over and then when a bloodbath did not ensue, he declared this as lawlessness that would not go unanswered, putting himself in the middle of the conflict and hoping to deflect from his involvement in shady, dirty real estate deals that benefit from all the ranchers being chased off. Cleanface Reid is the poster boy for fascism and should be legally prosecuted. The only violent extremists here are the government mercenaries themselves.

Reid has stepped in it big time and is in for a major blowback over this. Filmmaker Dinesh D’Souza traveled to Cliven Bundy’s ranch in Bunkerville, NV, on Friday to embark on a “fact-finding” mission. Prior to attending a “big rally” made up of hundreds of the cattle rancher’s supporters, D’Souza planned to talk to some of the people who Sen. Harry Reid (D-NV) has labeled “domestic terrorists.” D’Souza says the real terrorists are the Feds and he is right.

Sporting “domestic terrorist” name tags, these good people basically told Reid to stuff it. Like the IRS scandal, this is another targeting of innocent Americans who want nothing more than their freedoms, their land, their privacy and to be left alone. Something D’Souza is intimately familiar with.

This has been brewing for decades and even before the Bundy standoff, state leaders, especially in Utah, were making moves to get rid of Federal oversight on state lands. The EPA and BLM are incompetent and utterly corrupt. While decrying the sacred protection of the habitats of the Desert Tortoise, they euthanize over a 1,000 of them… while carping on the sanctity of the wild horses roaming the range, they send huge numbers of these horses to slaughterhouses in Canada. The states and individual owners will take care of the land much better than any Fed ever will. It’s time for Western states to wrest back control of federal lands within their borders, as stated by lawmakers and county commissioners from Western states in Utah’s Capitol on Friday. And so, a monumental fight for our freedoms in the West takes shape. This is for resources, land and the fate of our food supply. Our lives depend on winning this fight. 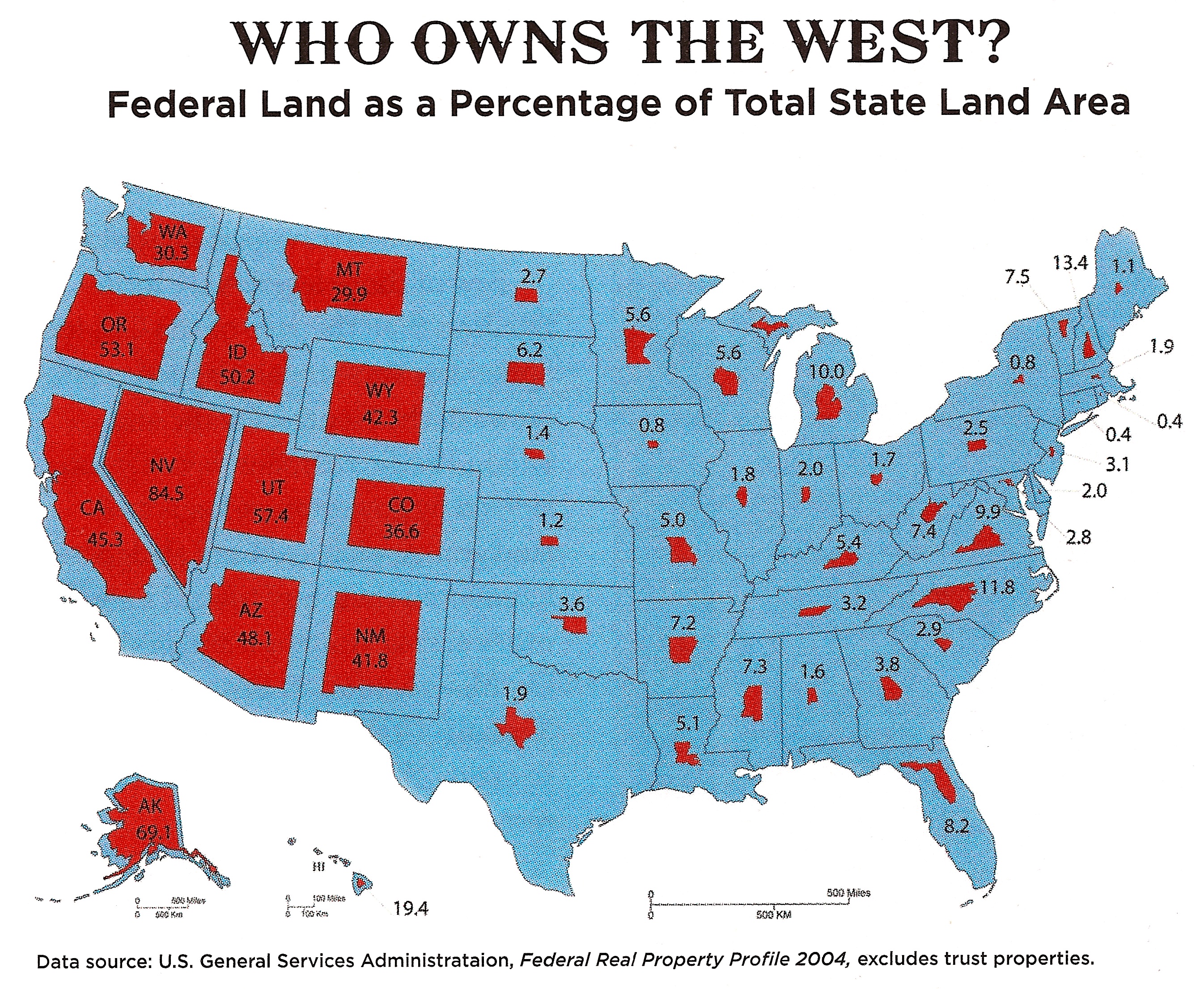 More than 50 political leaders from nine states convened for the first time to talk about their joint goal of regaining control of oil, timber and mineral-rich lands away from the Feds. When our government has basically seized control of somewhere between 81 and 93% of the lands out West, that can be seen as nothing less than nationalization of state resources and territory, and that my friends, is Marxism.

Along with leaders in these states, the Tea Party follows suit. I was very happy to see Mike Lee address these leaders on taking back control of our land:

Utah House Speaker Becky Lockhart, R-Provo, was flanked by a dozen participants, including her counterparts from Idaho and Montana, during a press conference after the daylong closed-door summit. U.S. Sen. Mike Lee addressed the group over lunch, Ivory said. New Mexico, Arizona, Nevada, Wyoming, Oregon and Washington also were represented.

The summit was in the works before this month’s tense standoff between Nevada rancher Cliven Bundy and the Bureau of Land Management over cattle grazing, Lockhart said.

“What’s happened in Nevada is really just a symptom of a much larger problem,” Lockhart said.

These state leaders are very worried about the Fed’s debt as well and how it will impact their individual states. You already see the government withholding funds for the lands, as well as saying who can and can’t receive water and resources. Each of these states are sovereign and should not be under the thumb of an overreaching tyrannical government. Utah is leading the way and the rest of the West is close behind. The Bundy standoff merely highlighted the growing tensions between free Americans and our lawless President and his thuggish agencies.

Meet the Coalition of Western States Legislators formed in response to the Bundy Ranch Standoff. I’m proud my friend Michele Fiore is at the forefront. The fight is just beginning and Americans need to rally behind these people.

Hundreds attended a picnic and gathering where I understand Madison Rising performed. I love those guys. And I can certainly understand sentiments from Cliven Bundy – right there with you son:

Bundy told Breitbart News the only communication he has received from the BLM recently has been through the mail.

“I’ve received some certified letters that I haven’t opened, and that’s the only conversation on that, so I’m going to save those letters for maybe awhile. That’s how serious I think they are,” he said. “I’m tired of their bull. They put their guns at me and my family and these American people. How can I honor one of their letters? I might never open them,” he added.

But the real quote of the day comes from D’Souza and it’s a zinger:

D’Souza, who is coming under fire from the Holder Justice Department himself, added, “I think what really rankles is the fact that justice is normally a virtue of liberalism. Liberals will say, ‘Oh we’re for social justice.’ Justice means treating people fairly and treating people who are in the same situation in a similar way. You get the sense with Obama that’s not the case. Lady justice has one eye open and she’s winking at her friends and sending the cops after her enemies.”

Amen brother. That’s exactly what is occurring. Justice for a select elite, but persecution for Obama’s enemies list. Justice should not be at the whim of corrupt bureaucrats such as Harry Reid and Eric Holder. She needs a severe makeover, via a return to Constitutional principles.

The Western states are prepping to reclaim their lands and sovereignty. A massive battle is getting ready to erupt with Progressive/Marxists and big government on one side and free Americans on the other. The wild, wild West is about to get a lot wilder.

2 thoughts on “The Western States: A Return To Sovereignty”