One, Jared Philips of the Maoist leaning Workers Party, confronted leftist Labour delegate Len Richardson and gave him and earful.

Len got pretty heated and ended up lashihing out with a megaphone, hitting Philips and also allegedly John Minto’s wife Bronwyn Davies in the process.

According to the Herald on Sunday 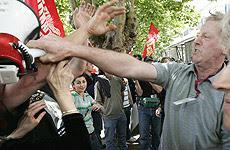 Richards is a delegate of the Service and Food Workers Union (SFWU), which was holding a lunchtime event at the conference.

The altercation happened around 11.30am, after Richards and fellow union delegate Jill Ovens emerged to tell protesters the SFWU was on their side. Ovens was drowned out by hecklers and went back inside. Richards picked up the megaphone, the protester tried to grab it off him and Richards took his swing. Richards retreated inside and later denied he meant to hit anyone.

Both were senior figures in the Alliance party until Ovens was forced to join Labour in order to take a senior position in the Service Workers Union.

When confronted by media, Richards at first denied hitting anyone.

When told that the incident was on tape, he then said he didn’t “mean to hit anyone“.