Here are some excerpts. The article reads like Matt has learned nothing since he was an idealist young Trotskyite. It reminds me of the glowing reports that the Webbs, Duranty, Reed and others wrote of Lenin and Stalin’s Soviet Paradise of the ’20s and ’30s. Matt Robson sees the rise of socialism in Latin America as a truly marvelous thing.

The Sins Of Venezuelan President Chavez 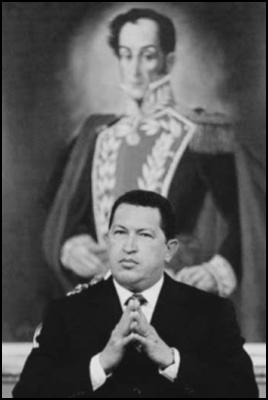 The oil rich despots of Saudi Arabia, the Gulf States and Kazakhstan use the oil wealth of their people to enrich themselves and their ruling elites, set up Swiss bank accounts and in the case of the Royal Saud Family, finance terrorism. Democratic activists and thinkers are persecuted.

In oil rich Venezuela, however, democratically elected President Hugo Chavez and his government are not following the above model. Instead Venezuela’s vast oil wealth, under Chavez, is being used for massive poverty eradication programmes to provide health, education, housing and employment to the poorest . Its leaders do not siphon off wealth to offshore banks.

According to John Negroponte, Bush’s Director of National Intelligence, the despicable Chavez is spending considerable sums involving himself in the political aeconomicmic life of other countries in Latin America and elsewhere, this despite the very real economic development and social needs in his own country.

Meanwhile the Venezualan kettle is setting a cracking pace in improving the lives of the poorest workers and farmers and has been banking $10 billion per year in a special fund to continue tackling the causes of poverty.

But, complains the New York Times on April 4th, echoing the chagrin of the Bush administration , this abomination of a President is using the oil wealth to influence other countries : With Venezuela’s oil revenues rising 32 percent last year, Mr Chavez has been subsidising samba parades in Brazil, eye surgery for poor Mexicans and even heating fuel for poor families from Maine to the Bronx to Philadelphia. By some estimates, the spending now surpasses the nearly $2 billion Washington allocates to pay for development programmes and the drug war in western South America.

So while the US selfessly funds development programs and fights drug wars which just happen to provide the cash and weaponry to keep corrupt regimes in power, the abominable Chavez is winning supporters across Latin America by investing in social and health programmes and making sure that the samba parade on Brazil went off with an even bigger bang then usual. How dare he peddle influence, the preserve of the old imperialist powers let alone spread socialist ideas that another world is possible by using national resources for the common good at home and abroad.

It was bad enough having that Fidel Castro and his communist government nationalise US corporations , kick out the Mafia and their gambling, prostitution and drug rackets and provide free heath care and education to all Cubans after the Revolution in 1959.

Now along comes this Hugo come lately with vastly greater wealth that used to flow North spreading his bad influence with all those newly elected leftist governments in Argentina, Brazil, Columbia, Ecuador, Paraguay and Uruguay.

Venezuela has signed dozens of agreements with Cuba. Among them is a plan that uses Cuban expertise in healthcare to benefit the entire continent. This has included 600 new diagnosis centres for Venezuela, 600 dispensaries and 35 hi-tech centres to guarantee free healthcare for all Venezuelans who can also travel to Cuba for cataract operations and this scheme is being extended throughout Latin America.

Venezuela has opened branches of its national oil company in Cuba and many preferential trade tarfiffs have been put in place thus boosting employment in both countries.

The Venezuelan/Cuban axis condemned by Washington as an axis of evil is being
seen by Latin Americans as a beacon of hope. It is an example of genuine fair trade:
Each country provides what it is best placed to produce, in return for what it most needs, independent of global market prices.

Venezuela is cooperating with Uruguay and Brazil to build oil refineries. The possibility of a single pan-South American oil company to benefit all is being discussed.

And the views on Latin America disseminated by the New York Times and other western media is under challenge by Telesur which is jointly owned by the governments of Venezuela, Uruguay, Cuba and Argentina. This television channel will provide news free of commercial interests and the influence of North American media.

Si senor , something is happening south of the border and New Zealand should be watching as this challenge to globalisation a la the neo liberal model grows stronger.

Perhaps it is time for Phil Goff to shake hands with Hugo Chavez rather than Donald Rumsfeld.

Yours Truly Well if Don Brash can shake hands with the Chinese, why not?