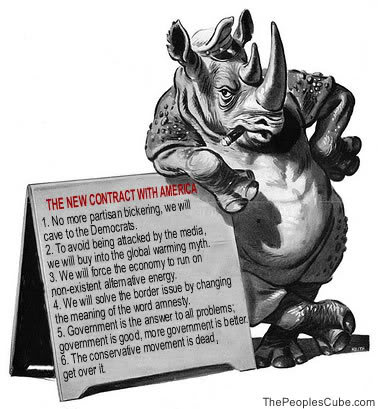 The attacks are now coming fast and furious from both sides of the Progressive aisle. You’ve got Schumer who wants the Feds to unleash the IRS on the TEA Party, followed by Cuomo and DeBlasio of New York wanting to chase conservatives out of the state. You’ve got a new blacklist in Hollywood, where conservatives are now the new communists and are being hunted down, outed and fired. You’ve got conservative movie producers being arrested for faux crimes, bloggers and journalists are being bugged and watched and you’ve got a President who obviously doesn’t give a flying you-know-what about the Constitution. It’s beginning to feel a lot like Nazi Germany out there, but it’s not the conservatives who are fostering fascism. It’s Progressives.

Now, you’ve got the likes of Mike Huckabee drawing parallels between the TEA Party and the Nazis. Making allusions to a fascistic trend that he should recognize because, after all, he’s projecting his own tendencies. The Progressives on the Right are screaming about the Progressives on the Left attacking the TEA Party, while using the words of a true conservative, Ted Cruz, to further their cause. Then they turn right around and attack the TEA Party. You guys must be on some really good drugs.

The RINOs are pushing Amnesty, Obamacare, unlimited spending and all things Progressive. Hell, they obviously support Obama; they certainly aren’t doing a damn thing to stop him. Huckabee and his ilk can claim to be conservative all they want, but their red Progressive diapers are showing. You know what the difference between a full-blown communist on the Left is and a hide-in-the-shadows communist on the Right? Timing and opportunity… not much else. Notice how the Progressive Right is supporting candidates that push the RINO agenda and are dissing and pulling support for the TEA Party. The NRSC and McConnell are fully behind Shane Osborn in Nebraska and not Ben Sasse, a true TEA Party conservative. Why? Because Sasse is endorsed by the Senate Conservative Fund and the Club for Growth. Both staunch conservative backers. Can’t have that you know. Can only have candidates bought and paid for that will say what the Progressives want said.

Meanwhile, John Boehner is making a complete horse’s ass of himself in front of the nation. According to RedState, he is saying he needs to be the “Gestapo” to corral wayward conservatives. He went on to compare working conservatives to jackasses in a bar. Takes one to know one, Johnnie boy. You are a disgrace and you have betrayed the conservative cause. Why don’t you take your golf clubs, your vices and your tanning fetish and stuff it.

Mitch McConnell, who rags on conservatives and the TEA Party behind closed doors and to donors every chance he gets and then comes out and says he did no such thing, is calling the TEA Party bullies. Why? Because they don’t kneel at the Progressive alter of McConnell and his sycophants. You’ve been bullying us for years and years. Now, when we start to move to take back control, you’re all alarmed and shocked and you should be. All of you need to be replaced. Hell, you need to go to jail for all you’ve done, or at the very least answer for your treasonous ways. You are blackballing political firms now that have helped too many conservatives. Just whose side are you on? Oh, wait… yours, which is the Progressive side. Hypocrites and turncoats all.

As for Huckabee, who was attacked unfairly by the Left this week and taken out of context, the media conveniently forgot to mention his Nazi allusion:

“Let’s stop calling each other somehow less Republican than someone else. Be for the person you’re for,” Huckabee said.

He said that he will be traveling to Auschwitz next week for the anniversary of the liberation of the concentration camp, and noted that the horror of the Holocaust began with the devaluation of people.

“It all started when people were devalued, when people were deemed ‘less than someone else,’” Huckabee said. “We look back on that time in history and we think, ‘How can educated people, university trained, how can a nation like Germany with all of its resources, with its vast level of its population with higher education, get to a place where they can do something so heinous?’ You realize that the only way you can end up there is when you start with the idea that people just aren’t as valuable as you are.”

The clear implication by Huckabee was that those within the GOP who make a habit of demeaning others as not conservative enough are flirting with behavior that can have grave ramifications down the road. It was a serious charge.

Voicing that Mitch McConnell should be replaced, does not mean we are Nazis and Huckabee knows that. Seriously? He calls himself a Christian, yet over the years I have seen countless conniving, dirty, manipulating tactics out of him that make me cringe. I’m done with Huckabee. I’m done with Progressives on the Right. I believe the TEA Party can take back the party of Lincoln, but if not… I will go third party. I will not vote for a faux conservative again regardless of where the chips may fall. I’m done.

Every day we learn more about the sausage making in the Republican Party and every day I have a new reason to abhor them and distance myself. These Progressives are not good, moral people and I do not like them. If principles matter to us, we must stand up to these frauds and put forth TEA Party conservatives. It’s the only way through the fire. Yielding and compromising is no longer an option. It’s now do or die. I would rather fight to the end and die on my feet than serve on my knees and in chains to Marxists.

Just a brief reminder: what is this thing, this “conservatism” of which we speak? It’s simple, really. Conservation is about saving something from ruin, and the thing we aim to conserve is the Constitution. Conservatism is the business of keeping the integrity of the Constitution. It’s not about “issues” and “agendas” at all, it’s about the foundation.

I would admonish the Republican Party to choose their candidates wisely, because America is fed up. If you push a Huckabee, or a Christie, or a Marco Rubio or a Jeb Bush at us — you will lose, which may be what you want. I can’t help but think maybe you want the likes of Obama or Clinton in power because it furthers your globalist agenda and empowers you. But know this… Americans won’t take this. They’ve had enough and they will fight, so you better be very, very sure you are hunting the right rabbit here. Because the TEA Party will tear you apart and will fight tooth and nail for the Constitution and founding principles to be restored. You and the likes of Schumer and other Progressives on the Left may attack us with zeal, but we will no longer be silent and passive. You can plot against us all you want, but you won’t take us down.

Big government Progressives are the enemy within we must defeat. Progressive Mike Huckabee is toast in the next presidential election even before he starts and the RINOs are full of crap. See you on the battlefield in 2014 and 2016. We’ll be the ones drinking TEA.