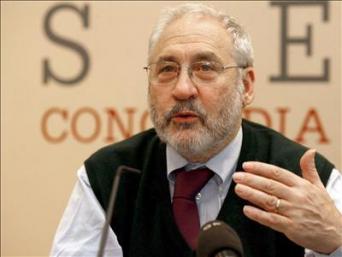 Joseph Stiglitz is Professor of Economics at Columbia University, New York. He is also a member of the Committee on Global Thought and Co-Founder and Executive Director of the Initiative for Political Dialogue at Columbia.

He was awarded the Nobel Prize in Economics in 2001 for his analysis of markets with asymmetric information and is a former Chief Economist and Senior Vice President of the World Bank.

In 2009, Joseph Stiglitz served on the Board of Sponsors of the far left Federation of American Scientists.

On September 23, 2008, the Socialist International Presidium adopted a statement on “the Global Financial Crisis and the G20 Pittsburgh Summit.” In addressing the current phase of the global financial crisis and the upcoming G20 Summit in Pittsburgh, the Presidium received a report on the work of the SI Commission on Global Financial Issues which had held its most recent meeting in New York two days before on 21 September, under the Chairmanship of Professor Stiglitz.

Strengthening automatic stabilizers through the enhancement of social protections and increasing the progressivity of the tax structure would contribute both to the stability of the economic system and a broader sense of social justice and solidarity.

The Fundacion Ideas, or IDEAS Foundation for Progress, was created during the 37th Federal Congress of the Spanish Socialist Workers Party in 2008 to establish a “think-tank with the capacity to bring novel progressive ideas to the arena of political and social debate in an ever changing world.”