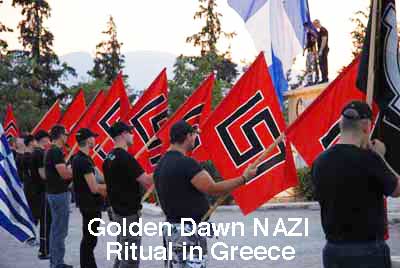 All hail, or should we say ‘heil,’ the rise of the Golden Dawn fascists in Greece. It’s all the rage (literally) in the streets of Greece these days. They now hold 21 seats in the Greek government – about 7% of the controlling body – and combined with the Communists, that control is closer to 20%. And their influence is not only growing there, but in Europe and the US. The darkness is rising once again and the Golden Dawn is telling those in power they should fear them now and indeed, they should take those threats to heart. Golden Dawn is demanding the respect of the Greek people and, with their violent stance, they may enforce it.

Golden Dawn leader Nikolaos Michaloliakos told The Associated Press in an interview that his party had delivered a blow against the country’s corrupt leadership.

“They slandered us, slung mud at us, and shut us out of all the news media – the TV channels of the corrupt elite – and we beat them,” the 55-year-old leader said as the votes came in. “The day of national revolution by the Greeks has begun against those who are selling us out and looting the sweat of the Greek people.”

History is repeating and a new horror is spreading its wings across the globe and few seem to be taking note of it. France just elected a Socialist leader (actually he’s a Communist; you say potato…) and Islamic fascism via The Muslim Brotherhood and al Qaeda is sweeping the Middle East. Look at history: Hitler and Islam joined hands in a Kumbaya moment of sociopathic murderous glee to slaughter the Jews last time and you are seeing the exact same moves today. Once again, America sits quietly by as the vilest of coalitions forms to engulf humanity while Satan laughs with delight. Iran is doing the nuclear bump as its evil imp of a leader boldly proclaims that war is not needed to defeat Israel. No… cutting ties and dirty looks should do the trick. Okay, you can stop choking with laughter now. Ahmadinejad is the ultimate trickster – I firmly believe he wants to nuke Israel into the afterlife and you are nuts if you can’t see that. We are on his enemies list as well – right at the top of it actually, with Israel a close second. A well placed EMP or two should take care of the US in the imp’s viewpoint and he may well be right. Millions would die in the aftermath of one second after. 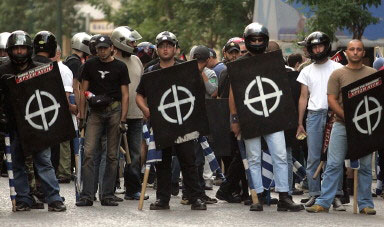 America is not immune to the spread of Golden Dawn’s platform. Certainly, if Obama is reelected we will see it spread. Of course, the name will be different, but the sulfuric stench will be the same. If Romney is elected and then does not follow the will of the people in America, which is a conservative bent by the majority, and goes back to bailouts and stimulus games, you will see the rise of nationalism here as well and that is poison. We dare not go down that road. History shows we could easily do so. There were pro-Hitler movements here in the US the last time this rose from the depths of Hell. Look it up.

The Blaze explains the scenario that could unfold:

Beck explained that the situation in Greece was likely a direct result of something he calls the “Bubba effect.” To refresh your memory on what this theory entails, envision a scenario where, in the wake of an Islamic terror attack and subsequent government ineptitude — particularly as regards national security and immigration — an everyman, or, “Bubba,” pushed to the brink, shoots someone who appears to be Muslim. Citizens rally to Bubba’s defense, blaming the government, not the murderer, for causing the problem in the first place. When citizens’ frustration with government reaches critical mass, a contingent can all too easily use that as an excuse to lash out. As we examine the situation in Greece below, it seems the Bubba effect may have already arrived.

One component leading to the unrest across the eurozone has been the enactment of austerity measures. Billed as an answer to the European sovereign debt crisis, austerity measures focus on achieving reduced levels of spending primarily through cutting public services and programs. This is done so that taxes need not increase to compensate for deficits. Needless to say, whenever public and social services are cut, those who champion said programs, particularly on the left, are bound to pose strong resistance. Such has been the case across europe, specifically Greece. With the exit of Sarkozy, German Chancellor Angela Merkel is perhaps the only pro-austerity leader left in Europe.

I never thought I would see this happen in my lifetime. It blindsided me and takes my breath away. When I face the evil developing, it causes me to cringe from within and begs me to turn away. I will not and I pray that America and the world will not either. The only way to beat back the darkness is to face it head on and fight with every bit of strength you have physically and in your soul. Death is not the worst thing that can happen to you. History is calling us – which side will each of us choose? I choose the light and will fight to my last breath defending Israel and what is good and right. My course is set, but the world’s is still very much in question. It has taken the world only 70 years to forget the last time we danced with this demon. Shame on us.

Listen to the hardline rhetoric of Greece’s Golden Dawn leader, Nikolaos Michaloliakos. Anti-immigration, isolation, nationalism… spouted with ear-assailing passion and vehemence. Remind you of anyone? All fanatical, charismatic psychopaths share certain traits – loud proclamations, soul-stirring speeches and gut wrenching inclusions meant to ensnare the soul and trap the individual with twisted, seductive language where up is down, wrong is right, death is life. 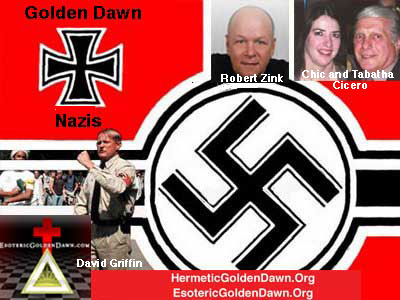 More is to be gleaned from The Blaze – the only one I know of that’s exposing this spreading cancer:

Vowing to “rid this country of the stench” — a.k.a. immigrants — Golden Dawn’s insignia is entirely too reminiscent of the swastika and its adherents, reportedly clad in black, are often seen physically abusing and intimidating immigrants across the country. Needless to say, Greece’s immigrant community is understandably concerned and opponents are preoccupied with how best to marginalize the Neo-Nazi group that has now gained legitimacy in the halls of government.

Michaloliakos, who is also no fan of the media, said the day of “national revolution by the Greeks has begun against those who are selling us out and looting the sweat of the Greek people.”

It might also be worth noting that “Golden Dawn” takes its name from a “magical order” of Freemasons who practiced in the late 19th and early 20th century Britain. The order has been cited one of the greatest influences on Western occultism.

The silence from the media and the world is deafening and beyond alarming. Israel sees what is happening. What happened to all of us who declared “never again?” Eternity beckons the world into darkness and we are too busy watching American Idol to care. Sigh. 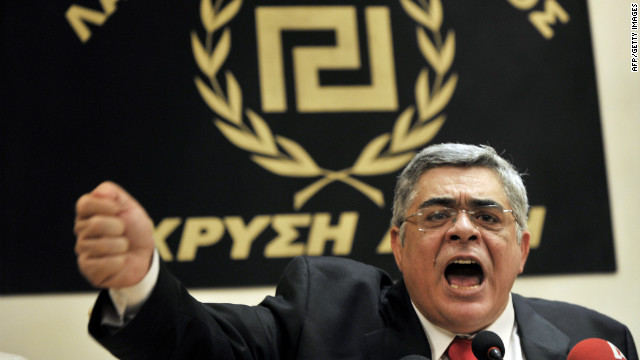 It is true that the Nazis killed not only Jews and Gypsies, but Communists and Socialists. But in many ways, the Nazis shared common goals with the Communists. That is why they were killed – their ideology competed with Hitler’s vision. Particularly, their economic goals were similar.

From the TIME Magazine profile that named Adolf Hitler its 1934 Man of the Year:

“Most cruel joke of all, however, has been played by Hitler & Co. on those German capitalists and small businessmen who once backed National Socialism as a means of saving Germany’s bourgeois economic structure from radicalism. The Nazi credo that the individual belongs to the state also applies to business. Some businesses have been confiscated outright, on other what amounts to a capital tax has been levied. Profits have been strictly controlled. Some idea of the increasing Governmental control and interference in business could be deduced from the fact that 80% of all building and 50% of all industrial orders in Germany originated last year with the Government. Hard-pressed for food- stuffs as well as funds, the Nazi regime has taken over large estates and in many instances collectivized agriculture, a procedure fundamentally similar to Russian Communism.”

There was a direct correlation between poverty, the increase of unemployment and the rise of Nazism. Think it can’t happen here? If we don’t change our course, look in the mirror at Greece. She is our future on a larger, more deadly scale. It took only 30% to elect Hitler and put him in office with an iron-fisted control of the country.

The fascist boogie fever has hit Greece and is dancing its influence across the planet. Spreading antisemitism, hate and fear while dancing to the Nazi beat. It’s literally to die for.

1 thought on “The Fascist Boogie Fever”