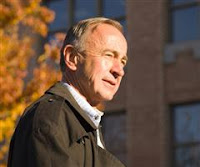 The Idaho “Tea Party Express” has bucked the trend to endorse an incumbent Democratic Congressman.

Minnick is a member of the United States House of Representatives, representing the 1st congressional district of Idaho. He will be running for office in Idaho in 2010 against primarily two Conservative opponents: Raul Labrador and Vaughn Ward.

While Minnick has a business background and a reputation for fiscal responsibility (by Democratic standards), there is little in his record to merit endorsement by a movement known for its anti “Progressive” and pro liberty, pro Constitution outlook.

Minnick has had numerous stances that I consider to be Progressive in nature and is supported by Progressive groups in Idaho.

He is strongly supported by the Unions in Idaho. This would include the Teamsters, the Teachers’ Union (NEA), the Carpenters & Joiners Union and a list of others as well.

Minnick was a donor to Earthjustice, a legal group that uses litigation to force far left environmental policies through the courts, while destroying good paying jobs. Earthjustice is a non-profit public interest law firm, (formerly the Sierra Club Legal Defense Fund). In Earthjustice’s 2003 annual report, Minnick was listed as being a member of their “Advocates Circle,” their mid-level donor membership level.

He is a strong environmentalist and he is pro-choice with a strong record supporting NARAL and Planned Parenthood. Minnick served on the Governing Board of The Wilderness Society for 16 years as well.

Minnick has strong ties to Congressman Steny Hoyer. Hoyer has contributed substantially to Minnick’s campaigns through AMERIPAC: The Fund for a Greater America.

He seems to be getting contributions from the left and the right, but there are some heavy players on the left that give to Walt Minnick including the law firm of Arnold & Porter, LLP which is a left-wing law firm from DC. If you follow the ties that bind, this firm is connected to individuals such as Charles Halpern, Sarah Bloom Raskin, Thurman Arnold and Jeremy Karpatkin.