Honduras is the new frontline in the war against socialism.

Pro-Chavez Honduran president Manuel Zelaya, tried to push things too far too fast and offended against his country’s constituion. He was legally kicked out of office-just as US President Nixon would have been had he not resigned first.

Now the sides are squaring off. The internatioal left is calling for the restoration of Zelaya. 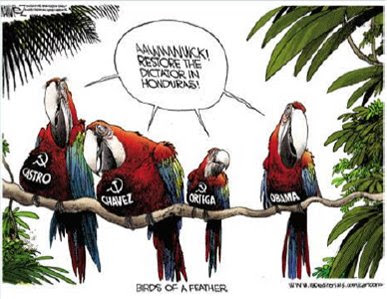 The freedom forces are backing the new Micheletti government.

This statement on Honduras from the Communist Party USA makes the situation clear.

Manuel Zelaya, the legitimate president of Honduras, has made a specific request to the Obama administration to increase pressure on the illegal regime of Roberto Micheletti, which was installed after a coup d’etat on the morning of June 28 of this year. Zelaya has asked the Obama administration to increase diplomatic and economic pressure on the illegitimate regime by taking actions targeting the main culprits. This happens at a critical moment when the talks mediated by Costa Rican President Oscar Arias have not progressed due to the intransigence of the coup regime, and when mass protest in Honduras has reached a peak with a general strike and with a growing mass movement in the streets to restore Mr. Zelaya, who is encamped on the Honduras-Nicaragua border, to the presidency.

The coup regime is isolated worldwide, but hangs on because it expects to be able to draw on material resources from the US, in spite of President Obama’s strong statement against the coup. The US ultra-right, led by figures such as Senator John McCain (R-AZ) and Congressman Connie Mack (R-FL), and supported by strong business, political media and military networks in the United States, are doing all they can to throw a lifeline to the illegal Micheletti regime. Their hope seems to be to keep the regime in power long enough that the scheduled November elections in Honduras (which Micheletti may move up) can take place under repressive conditions in which supporters of Zelaya’s program of progressive social and labor reforms can not openly campaign without risking jail or violence, and thus can not possibly win. Meanwhile, Micheletti’s de-facto government is increasing repression against labor, peasant, student and other opponents, with reports of several new deaths in the last two days.

The CPUSA agrees that it is necessary to ratchet up the pressure on the de-facto regime, and calls for the following actions:

We should contact the White House and the State Department to demand that the US government respond to President Zelaya’s request by taking the following immediate steps:

*Cancel US visas for the top military and political leaders of the coup.

*Freeze bank accounts in the US belonging to coup leaders as requested by Zelaya.

*Remove US personnel from the military base at Soto Cano, cease all coordination with the coup government’s armed forces, and expel Honduran officers currently being trained at the School of the Americas in Fort Benning Georgia.

*We should demand an end to the activities in support of the coup government by the International Republican Institute and other governmental and non-governmental organizations in the United States who have a heavy responsibility for the current situation.

Further, we should be contacting our members of Congress to ask that they sign on as co sponsors and work for the passage of House Resolution 630, which denounces the coup d’etat and asks the government to take measures to restore the constitutional order in Honduras. This resolution, introduced by Congressman Bill DeLaHunt (D-MA) has 40 cosponsors; this number has to be greatly increased.

Finally, the AFL-CIO, US Steelworkers and Local 10 of the International Longshore and Warehouse Union have led the way in calling for the restoral of Zelaya and the constitutional order in Honduras. We should build on these initiatives by getting statements and actions in support from other unions, faith based organizations, and civic and community organizations of every description so as to build a massive solidarity movement with the Honduran people here in the United States.

There is no shooting yet-but that could change at any time.

Honduras should be supported by all freedom lovers as the first serious reversal Latin America’s “red tide” has suffered.

If the West stands by Honduras it will embolden the counter-revolutionary forces in Bolivia and elsewhere in Latin America.

By supporting Honduras we defend our own freedom.

11 thoughts on “Why I Support Honduras”