For a very detailed but extremist view of the black extremist movements mentioned above, see “A Brief History of the New Afrikan Prison Struggle” by Sundiata Acoli (aka Clark Edward Squires), a comrade of Assata Shakur (aka Joan Chesimard, the convicted killer of a New Jersey State Trooper. She was freed from a New York jail by fellow members of the Black Liberation Army and fled to Cuba where Castro protects her even today). Squires is serving a long sentence in prison for his participation in the killing of the State Trooper in 1973.

[An interesting article, ” In Castro’s Corner,” about the US congressional Left and Cuba can be found here and was originally written by Jay Nordlinger, for the “National Review” magazine edition of March 6, 2000. It was reprinted at NRO on July 24, 2008 and revealed who in the U.S. Congress have ties to Castro and other Caribbean marxists].

Acoli’s long article was originally written “at the request of the New Afrikan Peoples Organization (NAPO) and was then entitled “The Rise and Development of the New Afrikan Liberation Struggle Behind the Walls,” and has been reprinted a number of times, often with editorial comments before the actual text. It can be found on the internet simply by searching for the name “Sundiata Acoli” and “prisons” and “writings.” It is one of the most revealing looks into the black extremist organizations, individuals and networks that is around, and it nicely shows their links to the white communist legal support networks of the National Lawyers Guild (long ago cited by Congress as “the legal bulwark of the Communist Party, now a mixed bag of communists of all types), the CPUSA-NLG creation the Center for Constitutional Rights, and the previously described black extremist legal group, the National Conference of Black Lawyers (NCBL).

Acoli’s report also adds in a new dimension into this extremist legal support network when he wrote the following re the 1980’s:

“But this second round of captured BLA freedom fighters brought forth, perhaps for the first time, a battery of young, politically astute New Afrikan lawyers Chokwe Lumumbua (BRC), Jill Soffiyah Elijah, Nkechi Taifa, Adjoa Aiyetoro, Ashanti Chimurenga, Michael Taif Warren, and others. They are not only skilled in representng New Afrikan POWS but the New Afrikan Inde-pendence Movement too, all of which added to the further development of the New Afrikan liberation struggle behind the walls.” 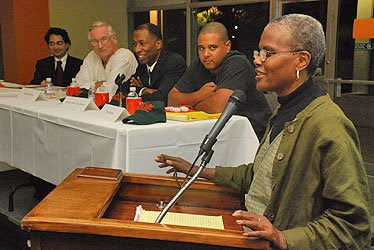 Acoli’s article, though very biased and often just plain wrong about the facts of certain incidents, has given us an insight into the world of black extremists and how they developed since the 1960’s. It shows that many of the groups and individuals now in the “reparations” movement associated with N’COBRA were dangerous violence-oriented black extremists. It is in this milieu that Rev. Jeremiah Wright and his Trinity United Church of Christ have been operating for many years, individually and church-wise.