His death has sparked a debate on Agee’s significance, motivation and morality.

The Campaign Against Foreign Control of Aotearoa (CAFCA) and the Anti-Bases Campaign (ABC) salute Philip Agee….He was one of the real global heroes of the latter decades of the 20th Century. By his courageous actions in exposing the names and operations of his erstwhile employer, the US Central Intelligence Agency (CIA), he will be forever remembered as a real American patriot (naturally he was vilified as a traitor, permanently stripped of his US passport, hounded out of his homeland and subjected to all sorts of threats).

His 1975 tell-all book “Inside The Company: CIA Diary”went off like a bomb during that turbulent era when the crimes of the CIA throughout the Third World and against its own people were being exposed. That book was absolutely essential reading for everyone at the time.

Agee was not a one hit wonder. He went for broke, undergoing a profound political transformation that saw him spend the next several decades actively working against American imperialism throughout the world.

In the mid 1980s, right at the height of the “Anzus Row”, when there were documented instances of the CIA working to destabilise the anti-nuclear Lange government (such as the notorious Maori Loans Affair, for instance) CAFCINZ – as we then were – invited Agee to make an NZ speaking tour, which then broadened out to include Australia as well. It was a tortuous process to try and organise, taking many twists and turns over three full years before finally coming to naught (Agee apologetically decided he couldn’t fit us into his incredibly hectic schedule; after the tour’s cancellation was announced, to major media coverage, the gutless Australian government said that they wouldn’t have given him a visa anyway)…

Philip Agee is owed an enormous vote of thanks from all the peoples of the world, including New Zealand. Where is his like among the kidnappers, torturers and murderers of today’s CIA? In Agee’s day the crimes of the CIA were confined to the Third World and hidden from its own people. Now, the culture of imperial impunity means that these crimes are brazenly committed in full view of everyone.

So, the need to oppose and expose this criminal enterprise is greater than ever. Right up until his death, Philip Agee did more than his share in striking blows against the Empire. The struggle continues!

Here’s a different view of Philip Agee from Ion Pacepa.

Who is Mr Pacepa? 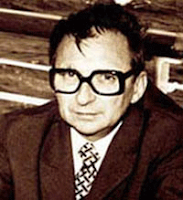 Ion Mihai Pacepa (born 28 October 1928 in Bucharest, Romania) is the highest-ranking intelligence official ever to have defected from the former Eastern Bloc. He is now an American citizen, a writer, and a columnist.

In July 1978, Pacepa was a two-star Romanian Securitate general who simultaneously held the rank of advisor to President Nicolae Ceauşescu, acting chief of his foreign intelligence service and state secretary in Romania’s Ministry of Interior. He defected to the United States following President Jimmy Carter’s approval of his request for political asylum.

Let me start by showing Agee as he was seen at the top of the Soviet bloc intelligence community, to which I belonged when he became a traitor. It is, I believe, a novel look.

According to Sergio del Valle, the head of the Cuban domestic and foreign intelligence services with whom I had a relatively close working relationship in the 1960s and 1970s, Agee was a venal womanizer who had been recruited in Mexico City by the Cuban espionage service, the DGI (Dirección General de Inteligencia), with the help of a Cuban lover.

At that time the Soviet espionage service, the PGU, was engaged in publishing bogus books by such supposed authors, such as White Russian commander General Vlasov and Soviet foreign commissar Maksim Litvinov, and even a collection of invented written correspondence between Tito and Stalin. [1] Agee was like manna from heaven for the PGU.

The PGU took over Agee from the Cubans and persuaded him to put his name on a “devastating book” against the CIA that would make him a “rich man.” During the Cold War the CIA was the West’s first line of defense against communist expansion, and the PGU believed that Agee could help it erode the CIA’s ability to recruit highly positioned people able to see what spy satellites could not—what communist despots were planning to do against the rest of the world.

The PGU resettled Agee in England, and tasked to write a book about his experience with the CIA. From General Aleksandr Sakharovsky, a former chief intelligence adviser in Romania who rose to head the PGU for an unprecedented 14 years, I learned that Agee’s book was in fact conceived and documented by a DGI/PGU team of disinformation experts in Moscow. The chapter drafts and the appended documentary materials were sent to Agee through a PGU officer assigned under cover as the London correspondent of the Novosti news agency, which was a PGU front. (I later identified the correspondent as Edgar Cheporov.)

In January 1975, this joint DGI/PGU disinformation effort took shape in the form of a book entitled Inside the Company: CIA Diary, attributed to Phillip Agee. The book claimed that “millions of people all over the world had been killed or had their lives destroyed by the CIA,” [2] and it identified some 250 “criminal” CIA officers involved in Latin American operations, whose names had been provided to Agee by the DGI/PGU team in Moscow.

Inside the Company became an instant bestseller and was translated into 27 foreign languages. Why? In my other life, as a communist intelligence tsar, I oversaw the Romanian equivalents of both the FBI and the CIA, and I came to realize that the populace has very different yardsticks for each. The domestic security agency carried out its duties more or less in the open, and its officers were seen as human beings with human failings. But foreign intelligence, which was buried in utter secrecy, was light years away from people’s everyday lives. It was considered to be a mysterious and magical organization, consisting of anonymous officers without name or face who could bring off anything asked of them.

The PGU capitalized on this perception.

In 1978 I learned about a new PGU operation, aimed at using Agee to make the CIA “toothless in Europe.” Soon after that I broke with communism, and of course I lost contact with those PGU plots. Twenty years later I learned a few details of this new effort from original PGU documents smuggled out of Moscow by PGU officer Vasily Mitrokhin, helped by the British MI6.

Documents in the Mitrokhin Archive—described by the FBI as “the most complete and extensive intelligence ever received from any source”—show that in 1978 the PGU created a task force staffed with officers from Service A (disinformation) and Directorate K (counterintelligence), headed by V.N Kosterin, assistant to the chief of Service A, and charged it to provide Agee with materials designed to create another book. This became Dirty Work: The CIA in Western Europe, which contained names and biographical details of some 700 CIA officers who were, or had been, stationed in Europe.

In 1979, according to other documents in the Mitrokhin Archive, the PGU tasked Agee to lend his name to a sequel book, Dirty Work: The CIA in Africa. Agee was met in Cuba by two PGU officers, Oleg Nechiporenko of Directorate K and A.N. Itskov of Service A, who gave him a list of CIA officers working on the African continent.

Dirty Work was published in September 1979, bringing the total number of CIA officers exposed by the PGU with Agee’s help to about 2,000. [3] [i]

Trust is the most valuable asset of any espionage service, whatever its nationality or political flavor, and the CIA was indeed harmed for a time—any high-ranking foreigner would think twice before putting his life in the hands of an espionage organization unable to protect the identity of its officers and sources. Nevertheless, the CIA continued to epitomize the notion of freedom for most of the people kept prisoner in the Soviet bloc, and it eventually become instrumental in winning the Cold War.

By the 1990s, Agee had become a forgotten relic. Now he has died of septicemia in an infected Cuban hospital, and he was immediately cremated to avoid future embarrassments. His books are turning to ashes as well.