According to the Communist Party of the Russian Federation’s website, 50,000 communists marched through Moscow on November 7th to mark the 90th anniversary of the Bolshevik revolution.

Large marches were also held in St Petersberg, Vladivovstok and other Russian cities. 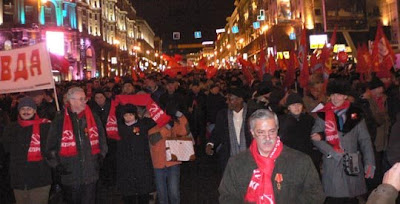 The Russian communists are the main opposition to Putin’s United Russia in the December 2nd Duma elections and are expected to significantly improve their numbers in the Russian parliament.

Hat Tip Once Upon a Time in the West