Sina Ana Brown-Davis is a Melbourne based New Zealander and a leading supporter of our 17 arrested “terrorist” suspects.

Of mixed Maori and Pacific Island descent Brown_Davis describes herself as a;

Brown-Davis also claims to be an indigenous anarchist

Brown-Davis has run a very active Blog Whenua, Fenua, Enua, Vanua since March 2007, which focuses on indigenous revolution, mainly, but not exclusively in the Asia/Pacific and the Americas.

She is a true revolutionary networker.

“This is a full-on criminalization of dissent and a deplorable and disgusting attack on peace activists. The activists have a heart-felt concern for social justice, but the government uses it as an excuse to arm themselves.”

Earlier this year Brown-Davis was herself in court with, three comrades, on charges relating to protests at the 2006 G20 Summit in Melbourne;

Defendant Sina Brown-Davis was also threatened by a security guard and the clerk of courts that she may be forcibly removed from the courtroom if she refused to remove a Torres Strait Islander flag from her shoulders. Ms Brown-Davis calmly stated her right to display the flag and opted to remain…

Sergeant Brent Scurry from the Salver taskforce said Finlayson, 36, of West Brunswick, who is facing six charges including reckless conduct for throwing bins and bottles at police and intentionally damaging a police brawler van

David Nguyen, 22, of Coburg, whose picture was also released by police last week, appeared at the same court today charged with five offences including affray and reckless conduct for throwing a bottle at approximately 12 members of Victoria Police.

Palsis faces seven charges including reckless conduct for throwing a metal pole at police and escaping from police custody.

Brown Davis is charged with four offences including possessing a prohibited weapon, namely a tonfa – a side-handled baton used in martial arts – and intentionally damaging a police brawler van….

The forum was organised by several Australian Marxist-Leninist Parties, including , the Communist Party of Australia and the International It brought together several hundred communists, Trotskyists, Maoists, anarchists and radicals from the Asia/Pacific and Latin America.

Sina Brown-Davis was originally scheduled to address a session entitled “The Global Influence of the Zapatistas“, but ended up addressing anther, entitled “Neo Colonialism in the Pacific“. 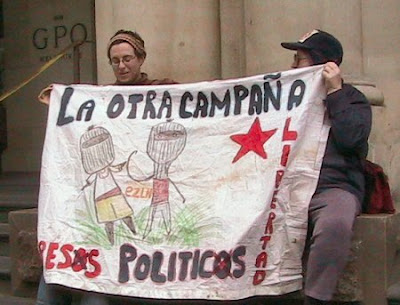 The other three advertised panelists on the Zapatista session were Estela Morales (Radio New-generation The Other Campaign-a front for the Zapatistas, Mexico), Eduardo Yssa (National Coalition for the Defense of Water & Life, Bolivia)and Dave Kerin (Union Solidarity Australia).

The fact that Brown-Davis was apparently considered enough of an authority on the Zapatistas to address such a forum, says much about her knowledge of the Mexican revolutionaries.