Venezuela’s Marxist President Hugo Chavez recently gave one of the more revealing interviews by a national leader in some time. 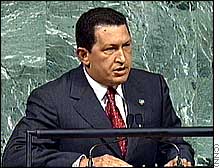 Caracas, November 9, 2006 In an extensive press conference of over four hours with representatives from the international media, Venezuelan President Chavez welcomed the U.S. Democratic Party’s success in Tuesdays elections and touched on many other issues.

Chavez called the vote against Bush’s Republican party a “battering” and a “punishment vote” for the Bush administration’s policies, referring to the war in Iraq, laws that limit civil liberties in the U.S., such as the Patriot Act, and the high level of military spending in the U.S.

Chavez then recalled how he was able to have a dialogue with President Clinton. “I received various emissaries from President Clinton,” said Chavez, emphasizing that such discussions were conducted quietly, “without convoking a press conference.” Also, the U.S. ambassador to Venezuela at the time, John Maisto, never said anything against Venezuela. “Now [after election], hopefully, the Democratic Party will come out with the best it has, the best of its principles,” he exclaimed.

Recalling the 2004 presidential campaign, Chavez told of how the Democratic presidential candidate, John Kerry, made overtures to contact him, via Citgo, and that Kerry sent warm greetings at the time. This gave him some hope that if Kerry were to win, a relationship of mutual respect with the U.S. could be started. However, a few days after the Citgo meeting, Kerry’s campaign came out with a strong anti-Chavez statement, which Chavez attributed to an error within the Kerry campaign, to “infiltrators” and thus decided not to respond publicly to the statement. Instead, he sent a private message to Kerry, saying that he doesn’t ask Kerry to put on Chavez’s trademark red beret. Instead, “If Kerry has to say that Chavez is a tyrant, fine, but then, once elected, we talk.”

Chavez then went on to recount how numerous efforts to establish a dialogue with the U.S. failed. Mexico’s President Vincente Fox, Colombia’s Alvaro Uribe, Brazil’s ex-president Henrique Cardoso, France’s Jacques Chirac, and Russia’s Vladimir Putin, all tried to mediate between Bush and Chavez. According to Chavez, he agreed to all of these efforts, but none of them went anywhere because Bush declined to accept their efforts. Some, such as Fox, even tried to mediate several times, every time to no avail. Chavez concluded, “There is no mediation with insanity.”

Turning to domestic issues, Chavez said that he would turn over power peacefully to his opponent, should he lose the election. “If they win the election, without any problems whatsoever, I would turn over the presidential sash to them and the next day I would be in the opposition,” said Chavez. “But, if we win again, I ask that they have the honorability, for the first time in all these years, to recognize the reality – I believe they will be better off for it in the future.”

Explaining that the true populists are in the opposition, not him, as is usually claimed. “I am a revolutionary,” said Chavez, “not a populist.” Instead, referring to opposition candidate Manuel Rosales’s proposal to provide all poor Venezuelans with a stipend from the country’s oil revenues, Chavez said, “What these people [the opposition] have invented is the non-plus-ultra of populism and irresponsibility.”

Asked what his government’s plans are for instituting socialism in his next term, should he win the presidency again on December 3rd, Chavez responded that the most important emphasis would be on “socialist ethics.” In earlier speeches Chavez explained that this implies an emphasis in favor of solidarity and against individualism and consumerism.

Another important element for the implementation of socialism of the 21st century, as Chavez has been calling his project ever since January 2005, would be the creation of socialist democracy. This, explained Chavez, involves the consolidation of “participatory, popular, and protagonist democracy.”

Next, it would involve the creation of a socialist productive economic model, with the emphasis on self-management, in cooperatives or in co-managed workplaces.
According to Chavez, Venezuela’s effort to create socialism is its own, original, and “Bolivarian” model, in reference to Venezuelan independence hero Simon Bolivar. Chavez also called it “indo-American socialism,” explaining that indigenous peoples of the Americas already practiced a form of socialism, which would have to be recovered. Finally, it is not a model that would be imposed on Venezuela from above, but is to be constructed by Venezuelans themselves.