From the Tonga Broadcasting Commission

Widespread looting and destruction have been carried out in downtown Nuku’alofa, Tonga’s capital since about 3 this afternoon, as youth and pro-democracy supporters take the law into their own hands. 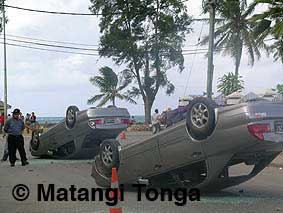 The riot erupted when pro-democracy supporters have been gathering at Pangai-si’i square, opposite Parliament House since this morning. Several representatives of the people to the Legislative Assembly, last night over local media, urged their supporters and their family, to congregate at Pangai-si’i today to show their support for the House to quicken the process of democratic reform.

A handful of people began marching to the Prime Minister’s Office before a crowd of several dozens youth began throwing stones to the office damaging windows.

Another group of people began damaging the nearby Treasury before rioters rampaged along Taufa’ahau Road into Leiola Duty Free shop, Pacific Royale Hotel, before torching Tonfon Headoffice, a block away from the hotel.

Some vehicles were also burnt along the road, including one of Tonfon’s. Heavy lootings were also reported from business houses. Fire and damage also affected nearby buildings and according to reports, they include Star Cinemas and the Fund Management Building, as well as major stores.

According to eyewitnesses, rioters then spread and destroyed ANZ Bank premises and several stores nearby, then Molisi Tonga store, Taumoepeau Building and another Asian store in the vicinity. 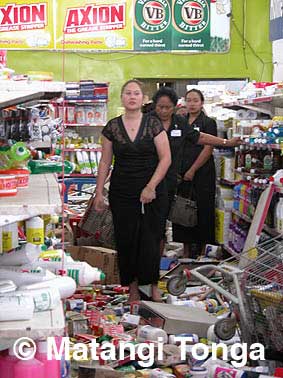 But the rampage did not end there. They spread to the east of Nuku’alofa damaging, looting and then torched the Fung Shing Company, which is situated one block away from the Tonga Broadcasting Commission’s (TBC) premises. As of 9.00 this evening, the skyline towards Fung Shing is well lit with the inferno while youth, women, men and children continue looting the shop.

Rioters have threatened to include Tonga Broadcasting Commission (Radio & TV Tonga) in their rampage, but so far, none has happened. Six soldiers are guarding TBC now and reinforcements are being requested. The threat of the attack had earlier left all staff of TBC panic and they had left at about 4 pm. It also disrupted Radio and TV Tonga’s normal schedule. Radio Tonga One (AM) and TV Tonga went off air at about 6 this evening. Only Radio Tonga Two (FM), whose transmission covers Tongatapu and the nearby island of ‘Eua, still stays on air with only five reporters. Many people have called these staff from throughout the Kingdom wanting to know about the latest development of the the situation in Nuku’alofa. 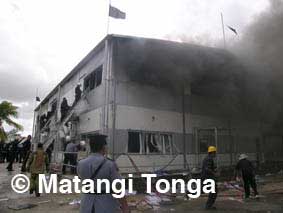 Virtually all of the Chinese stores in downtown Nuku’alofa and many areas of Tongatapu have been torched after being looted.

International flights this evening are reportedly cancelled until further notice.

Meanwhile, five pro-democracy people’s representatives – Tongatapu’s three and one from Ha’apai and the two Niuas, have made an emergency statement on Radio Tonga Two saying that cabinet has approved that 21 MPs will be democratically elected while 9 will be elected by the nobles.

In the meantime, Radio Tonga is on stand-by for an official statement from the Hon. Prime Minister, Dr. Feleti Sevele. Due to security reasons, the Prime Minister’s speech will be recorded over the phone from his office.