Our union, Unite, has sent three of our leading organisers to wealthier parts of the world to raise money from other trade unions for our upcoming campaign to win a union employment agreement for McDonald’s workers
Now I think I might know where one of these fundraisers went.

CARACAS — The first Australian trade union brigade to Venezuela, timed to include participation in the huge May Day march on May 1 here, commenced its tour with a successful visit to the eastern industrial cities of Ciudad Bolivar and Ciudad Guyana, following an initial orientation day in Caracas on April 25. The brigade, sponsored by the Australia-Venezuela Solidarity Network included nine Australians and one New Zealander.

The participants included four representatives from the Electrical Trades Union, one from the Amalgamated Manufacturing Workers´ Union, and other individuals from Australia, together with Mike Treen, senior organiser from the new Unite Union from Auckland, NZ. 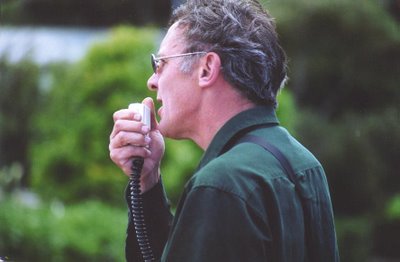 The brigade commenced on April 25 with an introduction to Venezuelan politics, conducted by Dr Marcelo Alfonso, Director of the Institute of Experimental Medicine at the Central University of Venezuela, and a long-time left-wing activist in Venezuela. Dr Alfonso outlined the history of modern Venezuela, and the roots of the Bolivarian Revolution which has shaken up Venezuelan society in the past decade, under the leadership of President Hugo Chavez.

That afternoon, the brigade had a meeting with leaders of the UNT (National Union of Workers), including a talk by UNT national organiser Jose Ramirez on the origins of the country´s main progressive union federation and current issues facing the UNT. The participants then boarded a bus to travel to Los Teques, south of Caracas, for a lively evening meeting with local union activists, sponsored by the Communist Party of Venezuela.

There are several questions here;

Was Mike Treen charged with requesting money or support from Venezuelan unions (or any other organisation, NGO, private company, individual or government source)for use in NZ?

If so, has he been successful?

If so, how successful?

If Mike Treen was indeed on a fundraising mission to Hugo Chavez’s Venezuela, should this be a matter for public concern?

Should it be of concern that a communist controlled union like UNITE should be sending representatives to one of Latin America’s richest and most powerful allies of Fidel Castro?

Where have the other two (or three, if Treen isn’t one of them) fundraisers gone?

If this was the National Party or ACT, visiting the US for funds, journalists would most certainly make it a subject of public concern. Will they question UNITE on its foreign funding? The amounts involved? The specific sources? The conditions attached?

Will I ever clean up all the pigshit that just dropped from the sky onto my garage roof?

11 thoughts on “Are the Chavistas Funding UNITE?”