One or two readers have asked me to Blog on the history of Marxist-Leninist and socialist influence in the Maori “self determination” movement. 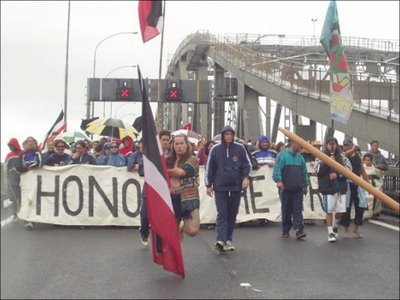 I hope to show that far from being a natural phenomenon, Maori nationalism, radicalism and separatism are very much an artificial movement.

In order to solve any problem we must know it’s true cause. I contend that NZ’s racial problems have been consistently amplified and aggravated by people whose express purpose is to wreck our form of society and replace it with a model of their choosing.

These people, the Marxist-Leninists and their sympathisers, working through myriad fronts and organisations have been picking the racial scab in this country for more than 70 years. They have deliberately created unnecessary racial division and are using it to create “social change”.

Marxist-Leninists, worldwide, have practised for decades a process of agitating amongst native peoples and minority groups in order to achieve social breakdown and eventual socialist control.

This process is known to the initiated as solving the “National Question”.

The process is international in scope and can be observed in action among the Australian Aborigines, the US Indian, Black and Hispanic populations, Israeli Palestinians, Northern Irish Catholics, the Saamic people of Norway, the Xhosa of South Africa, the Mapuche of Chile and the Maori of New Zealand.

It is being pushed by hundreds of Marxist-Leninist parties and sects among dozens of minorities all over the globe. The mother of world socialism, the United Nations is harnessing it’s power, through “The Decade of Indigenous Peoples” to bring about major social transformation and power shifts in every continent.

The recent report by UN “rapporteur”, Rodolfo Stavenhagen (a Mexican Marxist sociology professor), which claimed all sorts of indignities suffered by Maori, was a good example of “National Question” politics in action.

The very long series of articles following will look at Marxist Manipulation of Maoridom from the 1920s till today. Much of it was previously published in Lindsay Perigo’s “Free radical”, but there will be some significant new material.

1 thought on “Marxist Manipulation of Maoridom”