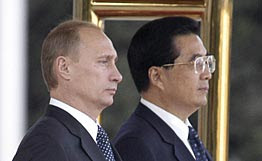 MOSCOW, August 10 – The presidents of Russia and China will meet in the South Urals August 16-17 for talks and a review of troops engaged in a regional antiterrorism exercise, Peace Mission 2007, China’s ambassador to Russia said Friday.

“On the invitation of President Vladimir Putin, Chairman of the Chinese People’s Republic Hu Jintao will visit Russia on August 16-17 to watch the joint antiterrorism exercise conducted by the Shanghai Cooperation Organization (SCO),” Liu Guchang told a news conference.

The diplomat said the leaders would meet twice, and the heads of all SCO states would gather August 17 for a review of the troops in the Chelyabinsk Region, on the final day of the exercises, which started on August 9.

The group, comprising Russia, China, Kazakhstan, Kyrgyzstan, Tajikistan and Uzbekistan, is largely viewed as a counterweight to NATO in the region. It has Iran, Pakistan, India and Mongolia as observer nations.

The SCO never before held a full-scale military exercise involving all its member states, but Russia and China have already held several joint exercises under the auspices of the organization, including Peace Mission 2005. About 5,000 servicemen and 82 Russian and Chinese aircraft are engaged in the current exercises.

Established in 2001 as a non-military alliance, the SCO initially focused on Islamist extremism and other security threats in Central Asia, but has since expanded its scope to include cooperation in disaster relief and trade.

Russia’s then Security Council Secretary Igor Ivanov said in May that the organization, often referred to as the Shanghai-Six, has never intended to become a military bloc.