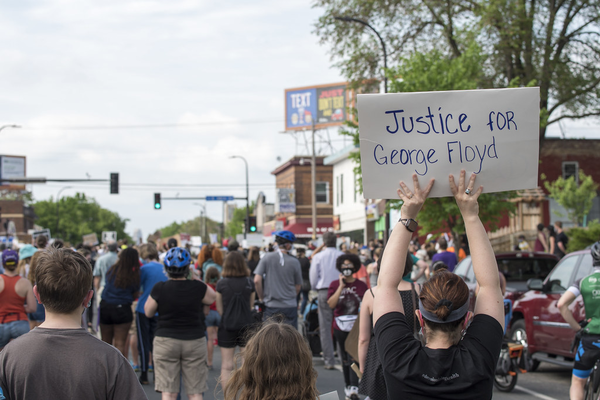 99.9% of our American family is saddened and outraged over the wrongful death of George Floyd. We want the responsible police officer prosecuted to the fullest extent of the law.

And yet, rather than bringing our nation together, fake news media and the Democrats are excitedly throwing gasoline on the flames of racial hate and division. Their message is that America is still a hellhole of racism in which blacks are routinely murdered by whites and police. Blacks must continue voting for Democrats to keep racist white America at bay.

As expected, Democrats and fake news media are absurdly blaming Trump for Floyd’s death. These vile human beings in the media will say anyone wearing a MAGA hat is a racist complicit in Floyd’s death. Minneapolis rioters chanted, “Kill the white folks.”

The mayor of Minneapolis absurdly said the riots and looting in response to Floyd’s death are justifiable because they represent 400 years of pent-up black rage. That is such a crock of pandering leftist nonsense. The rioters are nothing more than paid domestic terrorists and ghetto trash exploiting the incident to go on an illegal shopping spree.

The vast majority of the rioters wreaking havoc have never experienced an ounce of racism in their entire lives. Americans have been trained to know they had better kiss blacks’ derrieres at every opportunity or suffer crucifixion by Democrats and fake news media. For crying out loud, beginning in kindergarten, leftist-controlled public schools teach white students that they were born racist scum.  Therefore, all whites must feel forever guilty, apologetic, and accommodating to blacks.

The dirty little secret is Democrats love creating race-based crises because it allows them opportunities to demand more sure-to-fail gazillion-dollar government-fix-it-programs which end up fattening Democrat pockets. Along with selling their lie that America sucks, Democrats believe spreading racial hate and division wins them votes.

When I speak of ghetto trash, I am not referring to poor people. I was raised in an all-black eleven-story high-rise government project in Baltimore, Maryland. Grateful residents kept their apartments immaculate. Other residents were trifling ghetto trash with zero respect for the brand-new building, taking every opportunity to destroy it. I was around nine years old. Everyone told me everything wrong was always the white man’s fault. I said, “How can we stop mean white people from sneaking into our building at night; breaking the elevators, smashing liquor bottles, breaking light bulbs, and urinating in the stairwells?”

Democrats are all over TV exploiting Floyd’s death to falsely claim that blacks are routinely persecuted today the way they were in the 1950s. Democrats and fake news media are behaving as if eight years of America’s first black president never happened.

Sadly, the behavior of one bad cop helps Democrats and fake news media demonize all cops. Data confirms that cops are the greatest defenders of black lives.

In truth, the greatest threat to black lives is other blacks. Democrats and fake news media remain dead silent about 30 to 40 blacks murdering each other every weekend in urban Democrat hellholes like Baltimore, Chicago, and Washington D.C. Shouldn’t those black lives matter? Where are the outrage and anger?

Democrats and fake news media only care about black lives when it furthers their socialist/communist political agenda.

As a proud grateful American who happens to be black, I am appalled to witness Democrats and fake news media exploiting the tragic death of George Floyd. They are stirring the pot of racial hate to instigate violence while disrespecting blacks as useful idiots.

Blacks have experienced unprecedented prosperity and historic low unemployment under Trump.  To separate black voters from Trump, insidiously evil Democrats will use Floyd’s death to outrageously assert that reelecting Trump will mean open season for police to murder blacks. As baseless and stupid as that sounds, it reflects Democrats’ low opinion of blacks. It is the sort of emotional brain-dead lie Democrats believe will win over easily deceived black voters.