The rifle itself has no moral stature, since it has no will of its own. Naturally, it may be used by evil men for evil purposes, but there are more good men than evil, and while the latter cannot be persuaded to the path of righteousness by propaganda, they can certainly be corrected by good men with rifles. – Jeff Cooper, Art Of The Rifle

What country can preserve its liberties if their rulers are not warned from time to time that their people preserve the spirit of resistance. Let them take arms. – Thomas Jefferson in a letter to James Madison

Necessity is the plea for every infringement of human freedom. It is the argument of tyrants; it is the creed of slaves. – William Pitt the Younger, Speech in the House of Commons, November 18, 1783

This week’s winning essay is Stately McDaniel Manor’s Schools and Concealed Carry: Overregulation and Micromanagement . It is a characteristic of bureaucracy that even in pursuit of common sense, desirable goals they almost always manage to gum up the works! Mike McDaniel’s excellent piece does a fine job of showing how that can work. Here’s a slice:

Ironically, the Age of Obama has been a very positive thing for changing public attitudes toward one fundamental liberty for the better: the right to keep and bear arms. Not only that, more and more Americans fully support the right of individuals to carry concealed weapons, and the courts and legislatures are now tending to reflect the overwhelming public tide toward individual liberty and the right of self-defense. I have taken no small delight in the anguish, and I’m sure, screaming, raging tantrums, of anti-liberty activists such as Mr. Obama. I say this not out of spite, but because anyone that would take fundamental American liberties deserves to be uncomfortable and anguished.

Another positive effect of this sea change in public opinion, as well as an increasing number of terrorist attacks on American soil, is that one of the last bastions of progressive, anti-gun sentiment, the universities and public schools, have begun to accept, if not embrace, concealed carry to protect students and teachers from very real threats. Granted, on the state level, college students are trending to be the initial recipients of the freedom they should always have had, but more and more individual school districts–most in the red states–are adopting concealed carry on school property for staff.

This can’t happen soon enough. However, there are problems.

At the end of December, 2015, I wrote about the Keene, TX school district, which recently adopted a concealed carry policy, but with several restrictions that fail to take into account why anyone would need to carry a concealed weapon:

“Judging only by the Fox News article, Stephens [school superintendent] is apparently making two mistakes: he’s mandating and buying the weapons, and he’s denying them to teachers in ‘higher level grades,’ apparently out of fear that a student might somehow obtain a teacher’s gun.” 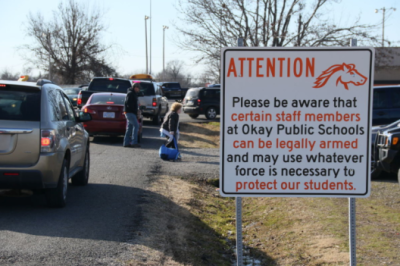 The Okay Public Schools Board of Education passed an ‘Armed School Employees’ policy in August. On Monday, the district publicized that policy with signage in front of the school.

‘The signs are more or less a deterrent,’ Superintendent Charles McMahan said. ‘We don’t want to be a soft target.’

McMahan said his administration looks for ways to keep students safe and secure, particularly since the Okay Police Department was disbanded in December 2014. Although Wagoner County sheriff’s deputies are available, McMahan said it is ‘seconds, not minutes, that matter.

So far so good. The Okay district has obviously recognized reality and decided to acknowledge it, something that, in education circles, cannot be taken for granted. Now for the problems:

One Okay employee is approved to carry. For other employees to arm themselves, they must qualify with a Council on Law Enforcement Education Training certification or license; possess an Oklahoma Self Defense Act License; and be CLEET qualified with the firearm, according to the policy.

After an employee has completed the qualifications, they may submit themselves to the OPS Board of Education for approval before carrying, McMahan said. Okay is the only school in the Green Country area with an armed-employee policy, he said.

‘Our standards are higher,’ McMahan said. ‘We really wanted people to know this is serious to us; we don’t take this issue lightly.

(1) Rationale: Staff are armed because an armed attack is possible at any school and at any place in and around any school at any time.

(2) The police cannot deter attacks, nor can they arrive in time to save lives. Any school relying on the police is knowingly accepting some number of wounded and dead based entirely on traffic patterns, the number of officers available when the call goes out, the lack of marksmanship of killers, in effect, dumb luck.

(3) Fundamental Principle: to have as many armed staff members present in every school as possible, so that when and wherever an attack takes place, there will be multiple armed and capable adults ready, then and there, at that instant, to save lives.

(4) All handguns must, at all times, be concealed and carried on the person. A gun locked in a drawer, a safe, or a centrally located armory is of no use to anyone confronted with deadly force in a school hallway, at a bus stop, in a sports stadium, a cafeteria, or any other place.

Much more at the link.

In our non-Council category, the winner was a Pajamas Media piece, What No One Seems to Know About Ted Cruz’s Past, submitted by Fausta’s Blog. It deals with Ted Cruz’s positive record while the director of the Federal Trade Commission’s Office of Policy Planning.

Here are this week’s full results. Only The Independent Sentinel was unable to vote this week, but was not subject to the usual 2/3 vote penalty for not voting:

Make sure to tune in every Monday for the Watcher’s Forum. and every  Tuesday morning, when we reveal the weeks’ nominees for Weasel of the Week!