Donna Brazile…is a leading Democratic Party operative. She is an adjunct professor, author, a syndicated columnist and the Vice Chair of Voter Registration and Participation at the Democratic National Committee.

In the 1990s, Brazile was the communications director for far left Delegate, Eleanor Holmes Norton (D-DC). She also ran Al Gore‘s campaign for the White House in 2000.

Brazile is Founder and Managing Director of Brazile & Associates LLC, a general consulting, grassroots advocacy and training firm based in Washington, DC.

In her early 20s, Brazile became actively involved in the United States Student Association, lined up a job as a lobbyist with the National Student Education Fund and moved to Washington, DC.

Brazile attended a Youth Peace and Disarmament Conference in Helsinki, Finland, and learned “firsthand how negatively other peoples viewed nuclear arms. That was one of the factors that hardened her resolve to want to go to Washington to work towards change.” The conference was the Soviet-controlled World Federation of Democratic Youth‘s for peace, detente and disarmament, World Forum of Youth and Students, 19-23, January 1981.

In 2009, Brazile was listed as a member of the Advisory Board of Wellstone Action, a Minnesota based organization built on the political legacy of that state’s late “progressive” and Democratic Socialists of America allied Senator Paul Wellstone.

Rep. Karen Bass traveled to Havana, Cuba on June 5th, 2011, accompanied by Donna Brazile, former Congresswoman Jane Harman and Sara Stephens of the the pro-Cuban Center for Democracy in the Americas, as a “Women’s Leadership Delegation.” 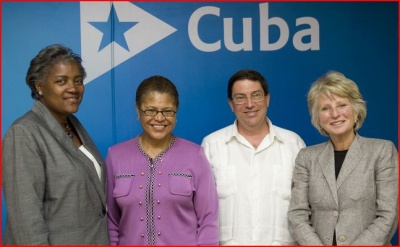