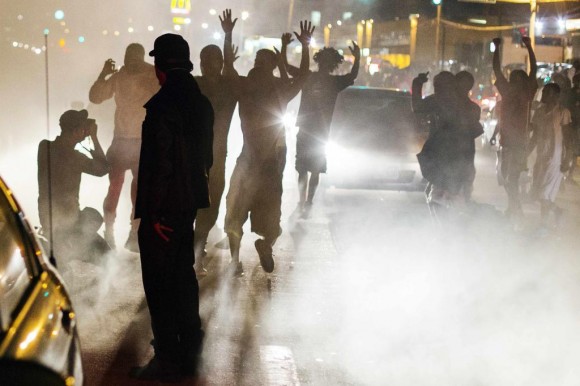 Remember when the media were complaining about the “militarization” of the police in Ferguson? ABC News is now reporting that the police have reason to be worried and well-armed. ABC News Justice Department reporter Pierre Thomas says the FBI is warning about violent extremists and outside agitators targeting the city.

The ABC News report says, “The FBI assesses those infiltrating and exploiting otherwise legitimate public demonstrations with the intent to incite and engage in violence could be armed with bladed weapons or firearms, equipped with tactical gear/gas masks, or bulletproof vests to mitigate law enforcement measures.”

The FBI also warns that electrical facilities, water treatment plants, and computer networks could be attacked by groups such as “Anonymous.”

So it looks like some of the agitators could be “militarized” themselves, and may in fact be part of an international plot.

You may recall that the Senate was rushed by the media into holding hearings on the alleged police “militarization” problem, as if the police were overreacting to the riots in the city after a police officer shot and killed a violent thug named Michael Brown.

The FBI report confirms what we reported back in August—that terrorist elements have been active on the scene. We said, “Ferguson has become a ‘war zone’ because of outside agitators…The real story out of Ferguson is that a national network of agitators is ready, on a moment’s notice, to arrive on the scene to cause violence and mayhem.”

Now, the FBI confirms the existence of a sophisticated network of violent extremists, including computer hackers with the ability to strike on a global basis.

We have reported on participation in the Ferguson protests by members of the Workers World Party, a Marxist-Leninist group, and its front, the ANSWER Coalition. The group supports regimes in Russia and North Korea.

The media have extensively covered the protests without noting the outside agitators who, in some cases, lead and manipulate them.

The result has been a propaganda bonanza for anti-American elements. The party newspaper, Worker’s World, reported, “The protests demanding justice for Brown were covered nationally and internationally. CNN, Al-Jazeera America, Press TV, Russia Today, the Guardian in London, as well as thousands of other news sources and media agencies…”

Al Jazeera and Russia Today are foreign-owned and operated propaganda channels. Al Jazeera is sponsored by the Middle Eastern Arab government of Qatar, while Russia Today is funded by the Vladimir Putin regime in Moscow.

The communists say the Ferguson “rebellion” is designed to expose U.S. “racism” to a global audience. Regimes such as the one in China use such reports to accuse the U.S. of failing to deal with its own problems and unfairly focusing attention on human rights issues abroad.

The FBI report gives the media the opportunity to finally tell the truth about the “spontaneous” nature of these well-planned demonstrations, which are deliberately designed to turn violent.

But it’s not clear that the FBI has actually infiltrated the protest groups in order to gather information about planned violence. The FBI may simply be gathering information from open or public sources.

Missouri Governor Jay Nixon had called out the National Guard to maintain the peace when the local police, supposedly armed with military-style weapons, were overwhelmed.

Now, as the public waits for word on whether or not the police officer who shot and killed Brown will be charged with murder, Nixon has called out the National Guard again. Most reports say the grand jury in the case will decline to indict the officer, Darren Wilson, as a result of clear and convincing evidence that he shot and killed Brown in self-defense.

While Congress has failed to probe the role of outside communist agitators in the Ferguson protests, the media have, on occasion, been forced to concede the violent nature of some of the demonstrations and riots.

Reuters quotes one agitator as saying, “Rioting and looting are the tools of those without a voice… There is no revolution without violence.”

Despite CNN’s sympathetic coverage of the protests, the communist Workers World paper singles out CNN for its alleged “sensationalized images” of violent protesters and “repeated character assassination” of Brown. The group helped organize a protest outside CNN headquarters in Atlanta.

The “character assassination” of Brown is a reference to video showing his strong-arm robbery of a convenience store and reports of him attacking Wilson before he was shot.

As the local police and Missouri National Guard brace for the anticipated violence when the grand jury verdict is handed down, it has becoming increasingly clear that the stories of alleged police militarization were a diversion from the real problem—outside communist agitation in Ferguson and the manipulation of black America for political and revolutionary purposes.

Some of this has been deliberately unleashed by President Obama and Attorney General Eric Holder, always eager to stoke racial extremism.

Katie Pavlich, News Editor at Townhall.com, revealed that former FBI Assistant Director and Law Enforcement Legal Defense Fund President Ron Hosko says in a letter to Obama that Holder has been an “antagonist” to local police and that “his ill-timed decision to launch a full investigation into the Ferguson Police Department at the height of racial tensions in that community” amounted to “throwing gasoline on a fire that was already burning.”

He added, “Many officers were disgusted by such a transparent political maneuver at a time when presidential and attorney general leadership could have calmed a truly chaotic situation.”

Many of the anti-police reports originated with Washington Post blogger Radley Balko, a supposed expert on police “militarization” who also serves as a “media fellow” with the Cato Institute. His writings have been characterized by the need for corrections, and unwarranted assumptions in his accounts of alleged police misconduct.

But much damage has already been done by this kind of erroneous reporting.

“We are the Militant Resistance against this corrupt police state, that includes the national guard,” says one Ferguson group called RbG Black Rebels.

The group claims to be fighting for Uhuru, the “liberation” of blacks worldwide, and has announced they will pay $5,000 for the “location” of Officer Wilson.

Wilson is said to be in hiding, while black radicals and communists plot openly to destroy the city, attack police, and destroy businesses.