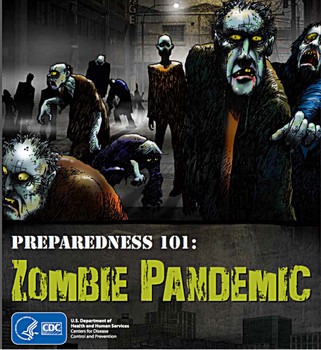 UPDATE: A Carnival cruise ship with 4,633 on board was refused docking in Belize to offload a married couple, one with possible Ebola symptoms for emergency transport. The wife, a nurse, had treated Ebola patient Thomas Duncan. The ship has departed Belizian waters and is headed for Texas.

You simply cannot make this stuff up. The accompanying photo is the cover page for a CDC publication called “Preparedness 101: Zombie Pandemic.” No doubt they thought they were being clever and creative, two words that are anathema to government bureaucrats. But yes, the CDC has a training manual using a “Zombie Pandemic” scenario. You know, because things like an Ebola pandemic are just too farfetched. Regardless. The guidance is the same. CDC recommends that:

Wait a minute… something is wrong here. it’s not the same. Some of this actually makes sense. I mean, a preparedness kit, emergency supplies? Basic, but at least you can’t go wrong with it. The brochure is laid out in comic book style. At the end, even though the main characters make it to the county shelter, the place is overrun by zombies and everyone dies! So what is the point? Are they really so determined to prove what a waste of taxpayer dollars they are? Fortunately the protagonist wakes up and it has all been a dream.

What is unfolding here, however, is not a dream – it is more like a nightmare. The CDC has already proven itself to be worse than useless. The guidance we have received has actually made matters much worse. Consider what CDC has decided is essential to fight Ebola:

The thought of squandering the 101st Airborne, about 3,000 other soldiers, plus the Guard, is not merely insane, it is criminally negligent. These troops are not nurses or grave diggers! They have been fighting a battle rigged to lose thanks to Obama’s military “strategy.” And now to add insult to injury, Obama is putting them and the rest of the military, and by extension their families and our entire country at further direct risk of contracting and importing the disease.

So now we have two nurses who cared for America’s first Ebola case, Thomas Duncan, have fallen ill, and a Texas-bound Carnival cruise ship has been denied docking in Belize because one of two passengers, is showing symptoms.

Meanwhile, in still more uplifting news, a commercial airline passenger from Nigeria, who obviously wasn’t screened properly, vomited and died while the plane was enroute to JFK airport. CDC officials made a cursory examination of the corpse and announced that it wasn’t Ebola. How on earth would they know? It takes days to perform a proper test. The body was turned over to Port Authority cops, who had the same question. And the answer is, they don’t have a clue!

CDC Director Thomas Frieden tells us that all that heavy protective gear, including respirators and full cover hazmat suit, is not actually a good thing but a hindrance. Why? Because as we all know, Ebola is not readily transmissible. Then why is everyone we see, from Atlanta’s Emory University Hospital – which saved Dr. Kent Brantly and missionary Nancy Writebol – to Liberian health workers, covered from head to toe with protective gear? Are they all a bunch of mindless idiots?

Apparently Dr. Freiden thinks so. The nurses taking care of – thanks to poor screening – were all wearing that protective gear, and they got sick. So, Freiden must be right. So good to know we have people who can think outside of the box! Phew, and just when I was starting to think he was Joe Biden’s addled cousin.

And we now discover that he isn’t even in charge. There’s someone even better. Obama has an Ebola Czar. White House advisor Lisa Monaco is more qualified than the eminent Dr. Freiden. She has zero heathcare experience. She did graduate from Harvard, though, so, no worries. She announced with assurance that “We know how to do this, and we will do it again.” Such self-assurance. I will sleep so much better now… Wait! We’ve done this before? I must’ve missed something!

Freiden states that restricting travel to and from Ebola epidemic nations of West Africa would make matters worse. But that is not his primary objection: “there are Americans who have the right of return and many other people that have the right to enter this country,” he says.

No, actually, in the case of a deadly epidemic, they do not! And then he explains, almost as an afterthought: “by making it harder to get assistance in and therefore those outbreaks would become worse, go on longer, and paradoxically, something that we did to try and protect ourselves might actually increase our risk.”

Can he be serious? There is nothing stopping us from aiding these countries by scheduling charter flights with trained healthcare personnel to affected areas. We could focus on fixing the problem over there, without worrying about it coming here. Ivory Coast, Senegal and even little Guinea Bissau, have not had serious outbreaks. Why would that be? Because unlike this country, which is led by a dogmatic, communist lunatic, drunk on his gas-filled ego, they have leaders that, for all their corruption, don’t want their countries destroyed. They promptly imposed rigorous travel restrictions and other measures. Guinea Bissau slammed their border shut. Ivory Coast halted all flights to and from infected countries.

But that would be too simple for this malevolent administration. No, the whole world has to share the risk. The Racist in the White Hose and the other Racist in the Justice Department probably see this as payback, or as Eric Holder says, “having a conversation about race” with this “nation of cowards.” Whitey deserves to get an epidemic of a really horrifying disease.

Watch the accompanying video of White House spokesman Josh Earnest trying to convince reporters that Obama’s Ebola planning is the right idea. He knows their response is lame, and he doesn’t believe a word he is saying. This is an administration of criminals.

Nothing to worry about. Move along now…