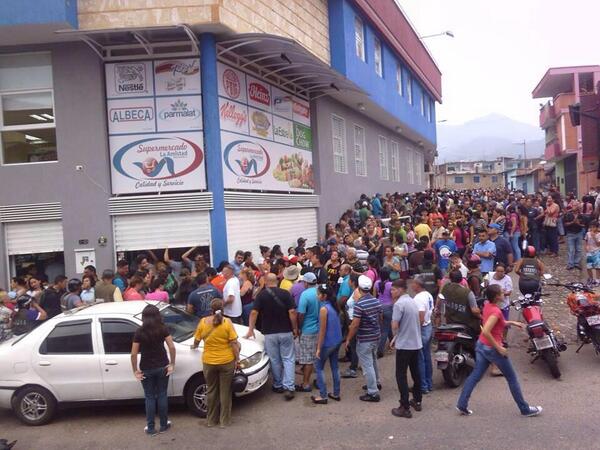 Fausta’s Blog: This in NOT a demonstration, this is a line to buy food in Venezuela.
The result of 15 years of Chavismo.

What the world is seeing in Venezuela is a glimpse at what might await the US if inflation spirals out of control. Naked, brutal hunger as food is severely limited to only what the government of Venezuela allows into the country. They import everything. Sound eerily familiar? It should. The US is becoming an importer nation and is not the producer she once was. Protests and violence follow hunger. Then the government comes in to put down the hungry masses. The world is not riding to the rescue. They are talking it to death.

In an echo of what Putin is declaring over the Ukraine crisis, Maduro of Venezuela is denouncing protestors there as fascists and violent vandals. Dictators always do this – they put the blame on their victimized people as being what they in reality are.

Last Friday, US lawmakers roundly criticized so-called Latin American democracies for not doing enough to bring a halt to the Venezuelan government’s oppression of their people and for holding secret meetings, behind closed doors. But we are guilty as well – Obama and Kerry have declared the Monroe Doctrine dead and are allowing dictators to run amok in South and Central America with their blessing. While they may pay lip service to being ‘alarmed,’ in reality, they just don’t give a crap and probably support these tyrannical governments. Almost, if not all, of the governments in Central and South America are suppressive in nature — a trait the US has more and more in common with them. Not only do they share oppressive techniques, they share debt:

The Organization of American States (OAS) Permanent Council, composed of representatives from all 35 countries in the Americas, convened in a closed meeting on Thursday afternoon in Washington, D.C., to discuss the Venezuelan crisis. The meeting, which was scheduled to continue on Friday, was requested by Panama as businesses in the country reportedly expressed concerns about $2 billion in debt owed to them by the Venezuelan government.

Venezuelan President Nicolas Maduro reacted angrily to Panama’s request by breaking off diplomatic and economic ties to the country, expelling the Panamanian ambassador and three other diplomats, and attributing the OAS meeting to “moves by the United States government in accord with a lackey government of a right-wing president.”

“OAS, out of here! For now and forever!” Maduro said in a fiery speech this week.

Maduro’s government has been widely condemned for an almost month-long crackdown on protesters that has now resulted in 20 deaths. A group of United Nations independent experts sought a response from the Venezuelan government on Thursday to allegations that security forces arbitrarily detained and tortured opposition leaders, protesters, and journalists.

While the UN does what the UN always does, impotently whines about Venezuelan injustice, they failed again at doing anything meaningful in the way of promoting and defending democracy and human rights in the region. Sounds a lot like the US these days. The US is now implementing the tried and true failed methodology of sanctions and US visa bans, asset freezes and prohibitions on financial transactions. That should have about as much success as hugging the barbarians at the gate would.

So, what does an evil dictator like Maduro do when his pesky people just won’t shut up and quietly starve to death? Why, you have your National Guardsmen prevent an ‘empty pots’ march from reaching the food ministry and then you blame it on the US:

President Nicolás Maduro’s socialist government, meanwhile, celebrated an Organisation of American States (OAS) declaration supporting its efforts to bring a solution to the country’s worst political violence in years, calling it a diplomatic victory. The United States, Canada and Panama were the only nations to oppose the declaration.

“The meddling minority against Venezuela in the OAS, Panama, Canada and the US, is defeated in a historic decision that respects our sovereignty,” government spokeswoman Delcy Rodriguez tweeted.

Over 5,000 people, many in their 40s and 50s, marched, banging on pots and decrying crippling inflation and shortages of basics including flour, milk and toilet paper. Similar protests were held in at least five other cities. These people spend hours and hours waiting for food and supplies, never knowing what will be available, if anything. It’s very reminiscent of Russia. While the US pontificates on human rights, real people are going hungry. They are being tortured and incarcerated for speaking out. America, where’s the beef? Where’s the cavalry riding to the rescue for real freedom to help these people be liberated from tyranny? Are you so busy admiring each other’s jack boots, that you just can’t be bothered? It’s right next door and will come home to us eventually. Probably sooner than later, the US will pay a price for ignoring tyranny so close to our borders.

Enter Joe Biden – America’s worst and dumbest VP ever, hands down. He’s ‘alarmed’ over the situation in Venezuela. Say it ain’t so, Joe. I can’t believe you actually even noticed or cared, since you went down to the region for the seventh time to cavort with Socialists, Communists and dictators. You admonish Madura for human rights violations and then jet to your next party. How big of you.

You might ask who Biden was hanging with on his trip. Let me enlighten you… Biden is in Chile for the inauguration of President Michelle Bachelet – a Socialist and a former Under-Secretary General of the United Nations and the Executive Director of UN Women. Small world, huh? The White House said that while Biden was in Chile, he would have one-to-one meetings with Bachelet and with presidents Juan Manuel Santos of Colombia, Ollanta Humala of Peru and Enrique Peña Nieto of Mexico. None of them are what I would call ‘freedom loving’ countries.

Not only is Biden stone cold stupid, he’s a Marxist propagandist and a liar:

For several weeks, Venezuela has been racked by clashes between government soldiers and student protesters backed by middle class Venezuelans disgruntled by extreme inflation and food shortages. Maduro has laid blame for the unrest against far-right provocateurs, the implication being that the US is fomenting the trouble.

In his El Mercurio interview, Biden disputed the claim, riposting that Maduro was trying “distract his people from the most important issues that are in play in Venezuela by inventing totally false and outlandish conspiracies about the United States. Instead of that, he should listen to the Venezuelan people, and to look to the example of those leaders who resisted oppression in the Americas, or risk repeating the injustices they fought against so bravely.”

He added a frank admission that previous US administrations had been propelled by the struggle against the Soviet Union to side with “leaders who do not share our values” – a reference to the backing given by Ronald Reagan and other US presidents to reactionary paramilitary groups and military governments across Latin America. “However, the US finally stayed on the right side of history in places like Chile, where the [former] US ambassador Harry Barnes and others publicly defended the victims of repression,” he said.

He went on: “We recognise that some hangovers of the cold war remain, so that suspicion goes with the territory. But most people in the Americas are tired of fighting old ideological battles that don’t help their daily lives at all.”

I’m not so sure the conspiracies are so outlandish. Since our government employs Saul Alinsky-style tactics to get their way these days, who knows what they have their dirty hands in? That aside, to state that Madura is ‘distracting his people’ with conspiracies about the US, is laughable. They are ‘distracted’ Joe, because they are starving to death, you moron, and they are being persecuted by their government… something you are quite familiar with doing here in the US. Then, he went on to take jabs at Ronald Reagan and other US presidents for admonishing ‘peace through strength’ and their military efforts to weed out Communists and terrorists from South America, which is just reprehensible. Should we instead follow the Obama Doctrine of empowering every damned Communist/Terrorist/Tyrant/Dictator out there? That’s worked so well for us in the last several years. In fact, it has removed our super power status and brought us to the brink of world war because of your moronic, weak national policies. As Sarah Palin said at CPAC:

Instead, Obama and Biden neuter us militarily and bare our national throat to our enemies, knowing full well what will happen. Unlike Biden, our embarrassing one-man national brain trust, Americans are savvy enough to realize the Cold War never ended – it shifted. Americans have only begun to fight these ‘ideological battles’ you speak of. They not only benefit our daily lives — they are what will save our country. Well, that and getting rid of Leftists such as Joe Biden, Barack Obama and the other Enemies Within.