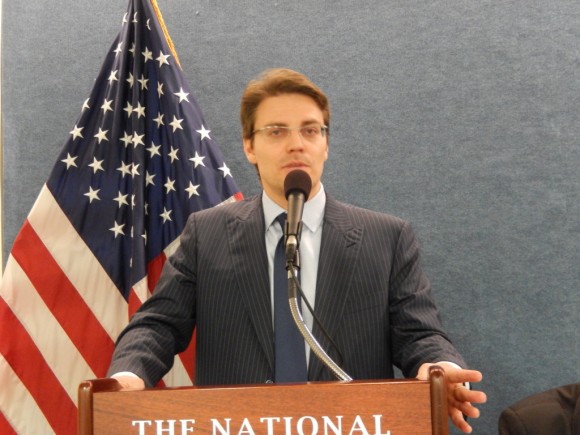 The 2014 Winter Olympic Games in Sochi aren’t the only platform for Russian President Vladimir Putin to assert himself on the international stage. He is reportedly planning to preside over a major Moscow conference in September sponsored by the World Congress of Families, a pro-family coalition that includes several high-profile American conservative organizations.

Putin, who is recently divorced and is said to have a mistress, will present himself as a defender of the Christian faith and Christian values, in contrast to the decline and decadence of the West. He is counting on conservatives in attendance to ignore the fact that he was a Soviet KGB officer and ran its successor, the FSB. One of the main specialties of the Soviet/Russian intelligence services is propaganda and disinformation.

The event, to be partly financed by Putin crony Vladimir Yakunin, will be held in the Kremlin, the Duma (the Russian parliament), Lomonosov Moscow State University, and the Christ The Savior Cathedral of the Russian Orthodox Church.

One of Putin’s allies, Alexey Komov, made an appearance in Washington, D.C. on Wednesday at a National Press Club news conference and blamed Wall Street bankers for funding the communist Bolshevik revolution in Russia in 1917.

Komov, who is the Russian representative of the World Congress of Families (WCF) and helps handle “international relations” for the Russian Orthodox Church, declared that “Wall Street bankers” were among the “international professional forces of evil,” that had “introduced communism” and “imposed” it on Russia.

To some in the audience, the comments echoed incendiary claims on anti-Semitic websites that Jewish bankers were behind Russian communism.

In addition to this controversy, Komov seemed to accept claims advanced by the so-called 9/11 “truth” movement that hidden or mysterious forces, possibly linked to the U.S. government, were behind the September 11, 2001 al-Qaeda terrorist attacks on America.

Komov was pressed repeatedly on his backing of the Putin regime and its oppression of the Russian people. I personally presented him with a list of political prisoners being held in Russia and asked him to seek their release.

Trying to turn the tables on the questioners, he brought up such topics as:

In regard to the September 11, 2001 terrorist attacks on America, Komov said “I don’t know” who did it, adding, “I didn’t do the investigation.”

Al-Qaeda leader Khalid Sheikh Mohammed, the architect of the 9/11 attacks, is being held in U.S. military custody at Guantánamo Bay. But Komov claimed that these are “political prisoners,” comparable to the human rights activists being imprisoned in Russia today.

He declined to explain why there have been no government prosecutions of those behind the murders of journalists in Russia.

WCF executive director Larry Jacobs was also a speaker at the press conference, and disclosed that he is trying to finalize confirmations from members of the U.S. Congress who will be attending the Moscow summit.

But the involvement of conservatives may be in jeopardy when they learn, as Jacobs confirmed at the event, that Vladimir Yakunin, a close associate of Russian President Putin, is behind the Moscow conference.

The Economist has described Yakunin, who runs the railway monopoly in Russia, as “a former diplomat who served his country at the United Nations in New York and is believed to have held a high rank in the KGB.” Jessica Stein states directly in the Harvard Political Review that Yakunin is not only a member of Putin’s inner circle but a former KGB official.

The World Congress of Families describes itself as an international network of pro-family organizations, scholars, and leaders from more than 80 countries that seeks to restore the natural family as the fundamental social unit of society. Conservatives agree that its work has been very worthwhile on a global basis.

However, its Russian connection is raising eyebrows.

Komov insisted that “Russia’s not a communist country anymore” and that Putin and other Russian leaders have not only turned away from their communist past and involvement with the KGB, but are Bible-believing Christians today.

Although Putin created his own “United Russia” political party, Komov admitted that the Communist Party of Russia is still a significant force in the country and is the second most powerful political party in the Russian Duma. In fact, Putin has identified Communist Party head Gennady Zyuganov as one of Russia’s most influential politicians, and presented him with an early Soviet edition of the Communist Manifesto as a birthday gift.

Komov, who describes himself as an anti-communist, claimed that the Russian revolution in 1917 was the result of “international specialists,” saying, “Leon Trotsky landed in Russia from New York City with the financing of Wall Street bankers—200 people—they hardly spoke Russian. So there were international well-prepared professional revolutionaries who have overthrown the Czarist Russian regime and introduced communism.”

He promised to supply an Internet link to a book to prove his claims.

The Russian Orthodox Church recently came under criticism for publishing a 2014 calendar in honor of Soviet mass murderer Joseph Stalin. Komov insisted the church was not directly involved in its publication.

However, scholar Keith Armes has observed that the Russian Orthodox Church “survived the collapse of the Communist system” and “is having difficulty maintaining its identity and credibility after seventy years of faithful service to the Communist Party.”

Former KGB officer Konstantin Preobrazhensky has called the church “Putin’s Espionage Church,” and devotes a major portion of his book, KGB/FSB’s New Trojan Horse, to its use by the Russian intelligence service.

The implication in the current context is that the World Congress of Families event in Moscow could become a vehicle for Russian authorities to exercise influence over American conservatives.

Nevertheless, Austin Ruse of the Catholic Family & Human Rights Institute strongly supports the upcoming Moscow summit and told the press conference that he believes Russia is converting to Christianity under Putin.

The curious financial dealings of Vladimir Yakunin, an underwriter of the WCF Moscow event with close links to the hierarchy at the Russian Orthodox Church, are the subject of a recent report that AIM publicized on massive corruption within the Sochi Olympics.

The report, “Winter Olympics in the Sub-Tropics,” states that while Yakunin was working on various Sochi-related construction projects, he “began building his own property in the village of Akulinino” that includes an owners’ residence, apartments, a guest house, a servants’ quarters, a garage for 15 cars, sauna, swimming pool, and prayer room.

“According to the realtors’ appraisals, the value of the property is $75 million,” the report said. “Yakunin’s confirmed income for 2007, according to the newspaper Vedomosti, was $1.5 million. Thus, Yakunin’s legal income was clearly insufficient to build such a costly property and maintain it.”

The report says Yakunin is an old friend of Putin’s and a member of the “Troika of Champions” benefiting from the $50 billion that is being spent on the games. It says $30 billion of that total has been stolen by Putin and his allies.

The Center for Strategic and International Studies hosted a roundtable discussion on Vladimir Yakunin back in 2007, which described his relationship with Putin as follows: “Their acquaintance probably dates back to the 1980s under Gorbachev, when Yakunin was working with the U.N. and Putin [was] working with the KGB in Germany. In addition, both Putin and Yakunin lived in St. Petersburg from 1991 onward and it is likely they had considerable contact. Their relationship continues to be close to this day.”

Conference participants predicted Yakunin could one day succeed Putin as president of Russia.

2 thoughts on “Putin Poses as Defender of Christian Civilization”