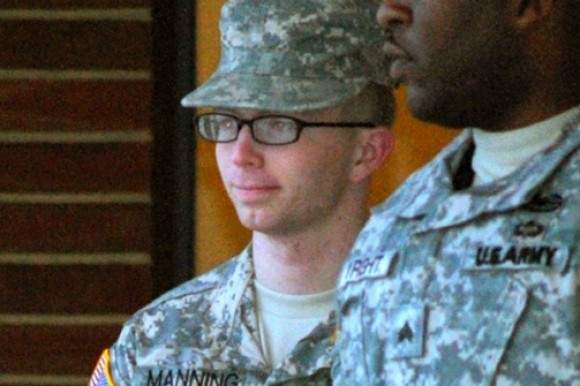 Before getting into the court-martial at Fort Meade in Maryland, my photo I.D. was checked and a bomb-sniffing dog was led around my car. My coat, wallet, and papers were searched and I was subjected to magnetometer screening by Army authorities. Inside the courtroom, members of the media were warned not to make any noises. No cell phones, cameras or recording devices were permitted. Welcome to the arraignment of Private First Class Bradley Manning.

The security arrangements surrounding the legal proceeding make it absolutely clear this is a major trial of international significance that will determine if the U.S. Government has any ability at all to protect classified information whose release can endanger lives and result in American and allied deaths.

The out-of-the-closet, cross-dressing, military homosexual wore his military dress uniform at the trial and said few words. He appeared frail and small in comparison to the other Army officers and soldiers in the courtroom.

Strangely, the death penalty has been taken off the table, but Manning is still facing life in prison because of the charge that his disclosures aided the enemies of the United States.

Far-left supporters of Manning, who regard him as a whistleblower, are asking Secretary of Defense Leon Panetta “to listen to our concerns about Bradley” and allow a special United Nations rapporteur on torture, Juan Mendez, “to have access to confidentially meet” with the former Army intelligence analyst.

Such a move would constitute unprecedented United Nations intervention into the U.S. military justice system.

They hope to make Manning into an international poster child for injustice at the hands of the United States military. They want the public to forget about the actual charges, including aiding the enemy and theft of public property and records.

They make much of Manning being held in solitary confinement. But Army officials say it is not uncommon for defendants to be held in their own cells.

As part of the pressure campaign against Panetta, who had a very liberal anti-defense record as a member of Congress from California, the Bradley Manning Support Network provided Panetta’s Pentagon telephone number so that its supporters could directly contact him. It is also suggesting an effort to “pressure his institute for public policy, which should certainly be educating people on the importance of whistle-blowers and fair justice.” This is a reference to the Panetta Institute for Public Policy at California State University, Monterey Bay.

Manning deferred a plea during the February 23 arraignment, leading to speculation that he may cut a deal with the U.S. Government and offer evidence against Julian Assange and WikiLeaks. Such an arrangement would leave prosecution of the case in the hands of Attorney General Eric Holder and the Justice Department.

Manning had three lawyers—two military and one civilian. The civilian attorney, David E. Coombs, is paid for by contributions from the Bradley Manning Support Network, a virtual who’s who of the radical left that includes the son of convicted and executed atom bomb spies Julius and Ethel Rosenberg.

If Manning gets off, it would mean that the greatest leak—and theft—of classified information in U.S history would go unpunished. It would mean that a possible espionage case against WikiLeaks founder Assange, now a de facto employee of Moscow-funded Russia Today (RT) television, would likely collapse. Assange is currently facing deportation from Britain on sex crimes charges and could be extradited to the U.S. to stand trial on espionage charges, if Holder ever decides to bring a case.

The Bradley Manning Support Network claims that, since June 2010, they have raised about $500,000 for Manning’s defense and that an additional $150,000 will be needed through the end of the court martial “to give Bradley every fighting chance both inside and outside the courtroom.”

It is deploying “Free Bradley Manning!” contingents at the G8 meeting in Chicago in May, where the Occupy movement is also planning civil disturbances, and “gay pride events nationwide in June,” when the actual court-martial might begin. The evidence in the case suggests that Manning leaked the information because he was angry over the Pentagon’s homosexual exclusion policy. This is why he has become a hero of the homosexual community, which wanted access to the military on the grounds that they were just as patriotic as everybody else.

The Bradley Manning Support Network is also planning “solidarity events” outside of Obama campaign offices “to challenge the president on his handling of Bradley’s case so far.” They think Obama has prejudiced the case by openly declaring that Manning broke the law. They hope his statement will be perceived as “undue command influence” on the trial and lead to the charges against Manning being reduced or dropped altogether.

What was happening outside the courtroom, before members of the media were ushered in, was part of this on-going campaign. Supporters of Manning turned out to “brief” the press. These included Zack Pesavento of the Bradley Manning Support Network and Michael Ratner of the Center for Constitutional Rights (CCR). Ratner, a veteran lawyer on behalf of Marxist causes, was there on behalf of Julian Assange and WikiLeaks. The CCR is funded by George Soros.

As reporters for Reuters and Associated Press listened, Pesavento claimed Manning’s disclosures to WikiLeaks—some 700,000 documents—had no negative impact on U.S national security. When I asked him about WikiLeaks’ indefensible disclosure of technical details about devices used to disable IEDs in Afghanistan and Iraq, he said he knew nothing about it. WikiLeaks also released a list of installations considered important to U.S. national security.

Pesavento and his associates laughed at the allegation that Manning could have aided the enemy in any way. “Who’s the enemy?” they asked.

When I asked why WikiLeaks founder Julian Assange was working for the Russians, he brushed this off, saying it was comparable to the Voice of America covering the case. Assange had promised to release documents about corruption in Russia but no such disclosures have ever taken place.

RT covered the arraignment by interviewing Kevin Zeese, the former marijuana lobbyist who is now with the Bradley Manning Support Network and the Occupy D.C. movement. He claimed Manning was “tortured” and the subject of a “kangaroo court.” RT also interviewed Jane Hamsher of the liberal blog Firedoglake. Hamsher, while taking Manning’s side in the case, has nevertheless noted in the past that explosive information indicates that Manning was in contact with “politically tied” people, including high-level Obama Administration and Pentagon officials, while he was stealing and releasing classified information.

The “only agency i cant get information out of at the highest levels is the FBI… i’ve never needed a source there,” says Manning in the incriminating chat logs released by a former associate.

Was Manning a pawn of high-level officials in the Obama White House? Who protected him? And why?

Since Holder is a partisan political appointee and cannot be counted on to pursue these leads, and Manning’s military trial will focus more narrowly on the Army soldier’s own personal responsibility in the leaks, it is up to Congress to get to the bottom of the wider scandal.