Here is a letter in support of the Uruwera 17, from Guadalupe Venegas Reyes, sister of Oaxaqueño anarchist political prisoner David Venegas.

We as oaxaqueños (people of Oaxaca) know perfectly about what moves a people to organize to demand justice and respect. We suffer represion from a mafia network of minor politicians who are protected by a system that is malfunctioning and useless to the people.

Nevertheless in the middle of so much blood spilled by our fallen brothers, to even to think of that pain, we feel, the majority of this people, that it is worthwhile to fight for being free of body but above all of thought and ideal. I energetically join the peoples of the world who are against the selective raids that the government of this country (New Zealand) carried out against people that think differently and correctly.

A NO to racism, disappearances, unjust judgments, entire families pursued, and NO NO NO to all the arbitrary decisions that politicians make in the name of power.

Justice for all the people, justice.

Who is this man? 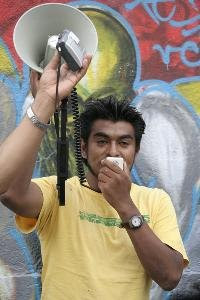 David Venegas Reyes is a young 24-year old Oaxacan student at the University of Chapingo. He is an APPO council member representing some of the largest barricades that carried on the resistance during the long months of the intense struggle of the Oaxacan people.

In recent months, as a result of his independent position and his refusal to demand “crumbs” or positions of power from the government of the state of Oaxaca or the political parties, he was accused of trying to divide the movement, when all he really wanted was a space in which all the different points of view of the Oaxacan people would be respected and in which one would not prevail over the other.

Due to the lack of a space that could bring art and culture together with the resistance of peoples, collectives, individuals and groups struggling for autonomy as an alternative to the current political system, at the end of February, David, along with many other people, built an organization called “VOCAL: Voces Oaxaqueñas Construyendo Autonomía Y Libertad (Oaxacan Voices Creating Freedom and Autonomy)”. Part of the work that VOCAL took on was to accompany the families of people who had fallen in the struggle in a walk with crosses through Santa Lucía del Camino, where policemen killed the Indymedia comrade Brad Will. David actively contributed to this activity.

VOCAL works with peoples in resistance in the Mixteca as well as in Oaxaca’s Isthmus (La Venta, Zanatepéc, Santo Domingo Petapa), the central valley region known as Valles Centrales (Zaachila), and in other communities and organizational spaces. This enabled David to carry the art, information, and voice of the barricades to other places in resistance. 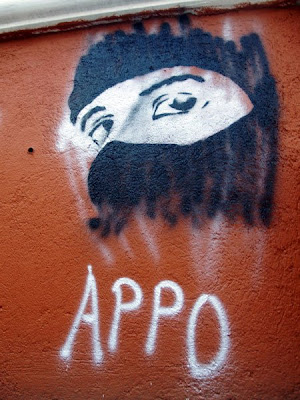 APPO stands for the Asamblea Popular de los Pueblos de Oaxaca (Popular Assembly of the Peoples of Oaxaca), a violent revolutionary organisation that brought Oaxaca to near chaos in June 2006.

The rebellion in Oaxaca has received support from the Zapatista Army of National Liberation and from “intellectuals” such asNoam Chomsky, Michael Moore and Arundhati Roy.

Venegas is also a supporter of the Zapatista’s “Other Campaign” (La Otra).

He is in jail for sedition, arson and drug dealing. Mexican activists claim that the drugs were planted by police.