As much as I would like to, I cannot get excited about the “Saffron Revolution” currently underway in Burma/Myanmar.

While I would like nothing more than to see the Chinese backed tyrants of the ruling State Peace and Development Council hanging from lamp posts, I doubt that their replacements would bring much improvement.

The Burmese regime has blamed communists for the unrest and in my opinion they are quite correct.

The government’s New Light of Myanmar newspaper quoted Religious Affairs Minister Brig. Gen. Thura Myint Maung as saying that protests by monks had also spread to cities like Mandalay, Hinthada and Monywa in seven of the country’s 14 states and divisions.

These agitators included members of the pro-democracy National League of Democracy, led by Aung San Suu Kyi, remnants of the defunct Burmese Communist Party and some foreign radio stations, the minister was quoted as saying. 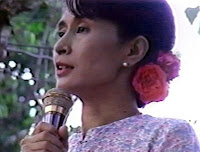 Unfortunately the Burmese Communist Party is not defunct and is there is evidence that it is working with and within the National League of Democracy led by under “house arrest” Nobel Prize winner Aung San Suu Kyi.

According to Once Upon a Time in the West

Suu Kyi has admitted that some of her advisers are “former” members of the CPB.

From the Buddhicisation of Aung San Suu Kyi

First, in early September 1988 prior to the foundation of the NLD Aung San Suu Kyi was accused of being surrounded by Communists…One observer put it that Buddhism ‘is an invaluable weapon in defending the political system against the attacks of the only hostile ideology capable of posing a serious threat, i.e. communism.’This drove Aung San Suu Kyi, in turn, to emphasize her Buddhist credentials from the start.

The accusation of communism was continued by military intelligence in mid September 1988, and later similar accusations were made by Aung Gyi on 3 December of the same year and in 1989. Though Aung San Suu Kyi denied this, stating on two occasions in June 1989 that these members had long renounced their communist views and that the NLD was, in fact, anti-communist, this became a repeated criticism by the SLORC. The accusations were perpetuated in subsequent journalist reports, and have continued right up until today.

In general the Burmese regime does not claim that Suu Kyi is a communist, but that she is being used and manipulated by the BCP and her leftist advisors.

In an interview republished in the Communist Party of Australia’s Guardian 17th April 2002 entitled “Burma’s Communists Re-Group” comrade Jacob of the CPB explained;

The anti-regime opposition is fragmented, reflecting both ideological and ethnic differences. The National Council of the Union of Burma (NCUB) is an umbrella group composed of Nobel Peace Prize winner Aung San Suu Kyi’s National League for Democracy (NLD), the Member of Parliament Union and the Democratic Alliance of Burma. The latter group is itself a coalition of 24 groups.

“The CPB has proposed working together on common issues with the NCUB. Just having a common enemy is not enough, we should have a common programme among the anti-regime forces,” Comrade Jacob says.

The article went on to say;

According to Wikipedia, the Communist Party of Burma is still active and dangerous;

Actual party membership is estimated to be no more than around 3,000 at any one time, even though in its heyday the CPB could muster troops in tens of thousands and around a million-strong peasant organisation. The party continues to recruit according to the ‘hard to join, easy to quit’ principle. Some analysts still consider the CPB a force to be reckoned with in future upheavals and potentially a major challenge to the military regime.

Whenever socialists fight socialists, ther’s only one thing you can be sure of. Socialists will win-the people will lose.

9 thoughts on “Burma-Socialists Versus Communists”