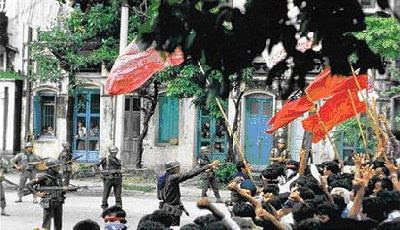 The peaceful people’s revolution in Burma against an oppressive and brutal military dictatorship now faces a crucial few days, as the Junta declares it will crack down on protests and demonstrations with the utmost of severity. But the huge marches in Rangoon, Mandalay and other major cities that have been led by monks, have now been joined by students and workers.

Solidarity Union calls on workers and students here in Aotearoa to come and show your support for our courageous brothers and sisters in Burma this Saturday, 2pm, in Auckland’s Aotea Square. Please bring your union or organisation banners and placards calling for freedom for Burma. This world does not need a horrific repeat of the massacres of 1988. “

Special speaker at the rally in Auckland will be Naing Ko Ko, a trade union and democracy activist with the Burmese Federation of Trade Unions, who was jailed and tortured for six years by the military dictatorship. The rally is also supported by the CTU, the Service and Food Workers Union, Amnesty International and Radical Youth. We appeal to other community groups to come and stand with Naing and the Burmese people in solidarity, and demand that the NZ Government has no truck with the military butchers or the companies that are profiting from Burmese slave labour.

Joe Carolan is of course a member of the Central Committee of NZ’s leading Trotskyist organisation, Socialist Worker. 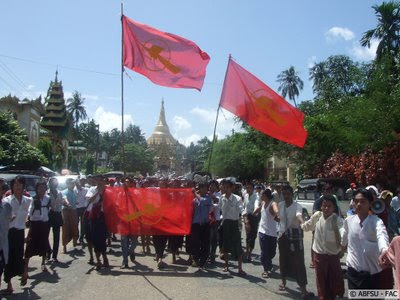 The also featured this quote;

State television said the demonstrations of the past week were being fomented by communists and exiled media and student groups.

Obviously trying to tell to their supporters why they should be rallying to the cause.

I’d have thought the red flags would have been enough of a hint.