Green Co-leader, Russel Norman’s outrage against state owned mining company Solid Energy’s infiltration of the Save Happy Valley Coalition is understandable given his party’s longstanding support of the protestors.

Several Green MPs, plus Russel himself have supported the campaign. Some Green socialists from Canterbury, including Christine Dann and Allan Leifting have also supported the protestors. 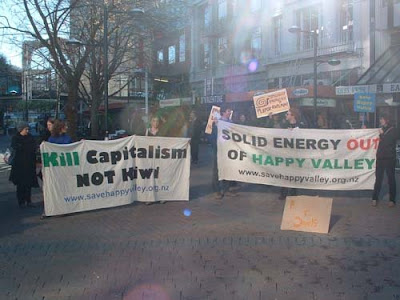 It’s no surprise that many of the protestors are anarchists or socialists including apparently, long time protest leader and spokesman, Frances Mountier.

The product of a well known Christchurch activist family, Frances Mountier has packed a lot of agitation into her 19 odd years.

Though not known to be Green Party member, Mountier has close links to Green MP Sue Bradford and several other Green party activists involved with the Kotare School situated at Wellsford, north of Auckland.

According to Kotare’s Spring 2006 newsletter

Kotare has a Youth Advisory group of people under 25 who have volunteered to give us feedback on how we are working generally and also specifically with younger people. We are meeting with them on November 11 and 12 to discuss our work. The advisory group members are Tali Williams from Wellington, Frances Mountier from Christchurch, John Darroch from South Auckland and Tui Armstrong from Whangarei. These young people have all participated in Kotare activities since the age of 15 and have active networks and great ideas!

So Frances Mountier has trained at a Green Party linked Marxist training school since the age of 15!

The phrase “brainwashed” comes to mind.

The real story here is that Solid Energy is fighting not just a bunch of irresponsible young protestors. It is also battling the Green Party, including several of its leaders and strategies learnt in Sue Bradford’s Marxist training school.

One can hardly blame them for fighting back with a little bit of espionage.