Meanwhile the Pure Trotskyists of have started their own union to organise low paid factory and industrial workers.

After a street by street, factory by factory recruitment campaign, Solidarity has begun to flex its muscles. 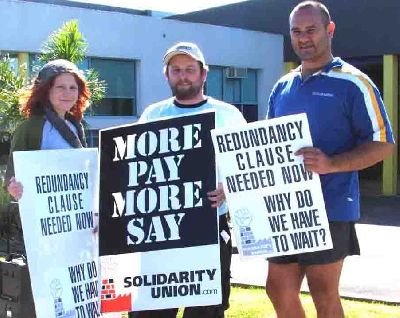 Solidarity Union activists today protested at the Management Headquarters of MetroGlass iin Auckland’s East Tamaki, to highlight the new Australian owner’s intransigence on providing an adequate redundancy provision in their contracts. MetroGlass was recently sold for over $350 million to Australian speculators Catalyst Investments, in a surprising move that startled and upset workers.

“We have seen what happened at Feltex, and at Progressive, and workers in MetroGlass are concerned that despite repeated management promises the company would not be sold to overseas owners, it was. Now there is promises of no re-structuring or redundancies. Well, if this is the case, it won’t cost MetroGlass a cent to include a decent redundancy clause in these workers contracts, since they promise they have no intention to lay anyone off“.

“We’ve been waiting four months for management to get back to us on this issue“, said Solidarity Union’s Joe Carolan. “85 workers signed a petition in October in favour of a 10 by 2 redundancy agreement- 10 weeks pay for anyone laid off, with a further 2 weeks on top for every additional year worked at the firm. MetroGlass is one of Auckland’s leading glass companies- the workers there think they should also lead the way in conditions and pay.”

10 thoughts on “Solidarity Strikes Out”