Jimmy O’Dea came to NZ from Ireland in the 1950s. He worked at Manapouri where was a union delegate. O’Dea learned his socialist politics in NZ and went on to join the Communist Party. 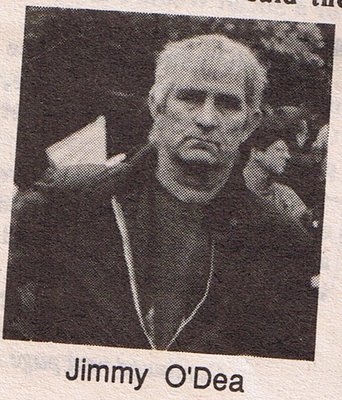 When asked where the money raised by the Connelly Association would go, O’Dea allegedly said;

“Of course we send them funds for arms. What else?” ” He added “We think the only way to get united Ireland is by violence… “

Asked about the bloodshed in recent riots in Northern Ireland, O’Dea said “So what? A few people on both sides are killed., but what is this compared to the thousands who die through starvation over the years? You’ve got to put these things in perspective. The cause justifies the casualties.”

In 1975, O’Dea was involved in the Maori Land March and in 1978 played a leading role in organising the Bastion Point occupation.

In the early ’80s, O’Dea was was a supporter of H Block/Armagh in Auckland.

In recent years he has been active in the Auckland branch of Socialist Worker, as have his sons, Kevin and Pat.