From the Cuban Communist Party’s Granma 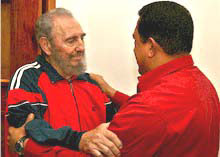 With emotion and joy, the Cuban people saw footage of the encounter between Bolivarian leader Hugo Chávez and President Fidel Castro on Monday January 29, broadcast on Tuesday the 30th on Cuban television’s “Informative Roundtable” program.

During their dialogue, during which both presidents embraced and chatted standing up, Chávez joked with Fidel, praising the progress of his recovery: “I am gauging the decibels of your voice. I think you’re speaking more loudly now than you were 48 years ago when you went to Caracas,” the Venezuelan statesman commented.

“This embrace and this sentiment are from millions; we miss you, we love you, we need you,” Chávez told Fidel…

After their encounter, the Venezuelan leader expressed his happiness at Fidel’s progress, and said he found him with the same lucidity and energy as always during the long, two-hour conversation between them.

“He was in a good mood, with a good expression, good spirits, and clarity — as always — in his ideas and analysis,” Chávez stated.

Chávez said that the two “went over data about the progress of the ‘energy revolution,’ the oil issue, the threats from the empire against the world, and potential new conflicts, the ones that must be monitored.”

“And, as always, great generosity, great human quality,” he added, referring to Fidel.

“There’s Fidel, on his feet, in one piece! And I pray to God that he continues to recover,” Chávez exclaimed.

“I give to Cuba my heart and my greatest feelings of satisfaction and happiness, I would even say of jubilation, for finding Fidel the way I have found him, and I would like to extend that recognition to everyone: his family, comrades, doctors and nurses, because I know the big effort they are making,” the Bolivarian leader continued.

2 thoughts on “Grab Your Bucket, Now!”