I went to Jade Stadium in Christchurch last night, with a couple of mates, to watch the Kiwi Rugby League Team play the Poms.

I’d been pondering racism a bit after my last post and I had one or two realisations during the game. 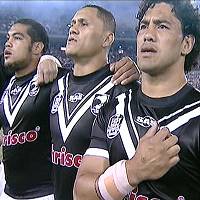 The left, particularly the Marxists, often accuse capitalists of being racists. In fact they claim capitalism per se is an implicitly racist system.

Here was I, one of 17,000 League fans, 80% of whom were white, cheering on my country’s finest players against the best of Britain.

Of the 17 Kiwi players to take the field, only two (Simon Mannering and Nathan Fien)would have been able to ride in the front of a bus in 1970’s Johannesburg.

As the Kiwi players took the field, they were all cheered. The “Little General”, Stacey Jones (Maori) received by far the greatest applause, followed by Ruben Wiki (Samoan/Maori) and Aussie born Brent Webb (Torres Strait Islander).

The Lions were white as snow except for one black player. Yet there was no question whose side the local crowd was on.

Even our group of three (two of us capitalist ACT members) cheered on the brown boys as they eventually dominated the Poms to win 18 points to 14.

Why didn’t we racist capitalists support the white boys against the Maori, Samoan and Tongan NZers who made up the bulk of the Kiwi side?

Simple really, because every Kiwi out there was chosen on merit. Every Kiwi supporter knew that coach “Blue” McClennan and his selectors had picked the very best players possible to achieve victory.

Capitalists care about results. They care about production, success, self motivation, discipline and victory. Only committed individuals can deliver such things. Even in team sports like League, it is individual attributes that make the difference.

Sport is the most capitalist, free enterprise, “dog eat dog”, neo-liberal, “New Right”, laissez faire sector of NZ society. It is also the least racist. Everything comes down to what you can do on the day. Can you score the Try? Make the match saving tackle?

No one gives a stuff about the Treaty, or where your whanau comes from, or whether your team “truly reflects the diversity of NZ society” when you’re making a 50 yard dash to the tryline like “brown bullet” Brent Webb did last night.

South African Rugby, under the ANC government has gone down a different path.

They don’t have “quotas” as such. They simply tell the Springbok selectors that if they have to choose one of two players of near equal ability, they must go for the more ethnically correct (black, or coloured) candidate.

South African Rugby is hugely divided over this issue and I believe it has contributed to their poor showing in Super 12/14 over the last few years.

So if we want to improve race relations, the answer is clear. Liberate our society from all types of race based laws, ethnic quotas, race based funding and the like.

Let the sporting ethic be the guide to all our social and business relationships. Let people be what they want to be and let their abilities and drive, alone take them where they want to go.

A free society values people for what they can contribute. The more freedom we have, the more contribution we will get.