After a ticking off from Moscow for slackness and adopting a Maori programme at its 8th conference in 1936, the Communist Party of NZ began stepping up its work with Maori.

One major target was of the CPNZ, was the Waikato based head of the Maori “Kingitanga” movement, “Princess” Te Puea.

Born in 1883 Te Puea was the grand-daughter of the second Maori King. During WW1, Te Puea opposed conscription and gave refuge to “draft dodgers” on her farm.

After WW1, Te Puea founded the Ngaruawahia community, now known as Turangawaewae and re-established Ngaruawahia as the centre for the Kingitanga movement. 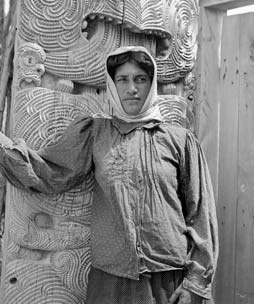 Te Puea promoted Maori agricultural development and in 1937 was made a Commander of the British Empire.

Her prominence, leadership skills and probably her early “radicalism” made her an attractive target to the CPNZ.

I quote Massey academic and communist/labour historian, Kerry Taylor from “On the Left; Essays on Socialism in NZ” page 109.

“Perhaps as important as Maori members (of the CPNZ) were pakeha members with an interest in, or some contact with Maori. Bill Eady, a garage proprietor and local councillor in Ngaruawahia, was a critical link between the Party and Te Puea during the 1940s”. According to Taylor he wanted the Party to support any institution “evolved by the Maori communities themselves“. Taylor says that in Waikato the Kingitanga movement was a “particular focus“.

The movements aspirations were, according to Eady “clearly in line with Stalin’s insistence that minority peoples in the Soviet Union should not be russified but be aided in developing their legitimate aspirations within their own organisations“.

CPNZ member and Auckland Labourers Union secretary, Pat Potter was the Auckland Trades Council Maori laison officer. According to Taylor, he too worked closely with Te Puea, “especially on the Orakei issue“

While on leave from Air Force training during WW2, Smith spent time in Auckland.

“One notable event I participated in was the construction of a palisade fence around the pa of the Ngati Whatua at Okahu Bay…. The land was swampy and the government was trying to take it off them, and demolish the houses and shift the occupants into the State houses on the hill behind it. But it was their turangawaewae and it was part of their whole struggle to save their Bastion Point land.

The Carpenters Union and the Auckland Trades Council were then under Communist Party leadership and they issued a call for trade unionists and others to take part in a working bee and build under the leadership of Princess Te Puea, a Maori stockade right along the road frontage of the village… I saw the call in the Peoples Voice and went in. A couple of hundred unionists were there…Princess Te Puea was there and was delighted.

She had found in the modern working class movement a strong ally for her Maori national movement. It cemented a bond between her and the Party, and particularly with it’s General secretary Vic Wilcox, which lasted throughout her life.”

Vic Wilcox’s in the “Dictionary of NZ Biography” confirms this close relationship with Te Puea. ”

After his discharge from the RNZAF in 1945 he became the Party’s country organiser and then national organiser. In this period he established a close working relationship with Waikato leader Te Puea Herangi; in 1943 the CPNZ supported her in the struggle with the government over Auckland’s Orakei marae

In the late ’40s, the CPNZ also tried to influence Cook Islanders living in NZ. CPNZ member Pat Potter worked closely with Albert Henry, Secretary of the Cook Islands Progressive Association. It is believed that Potter advised Henry in setting up the central office of the association in Auckland. the CIPA was instrumental in several strikes involving Cook Island workers and caused concern to NZ’s Labour Government and the then moderate Federation of Labour.

FOL General Secretary Ken Baxter(himself a former CPNZ member) wrote a report on the Cook Islands situation in 1946 “…the policy pushed by the Auckland “Headquarters” of the CIPA is allied to and influenced by the programme laid down by a recent conference of the Communist Party of Australia,… at which a delegate from the CPNZ was present.”

Te Puea also helped out by urging NZ based Cook Islanders to seek the support of the CPNZ controlled Auckland Trades Council.

Albert Henry went on to lead the Cook Islands into a form of Polynesian socialism that made his country heavily dependent on the NZ taxpayer for survival.