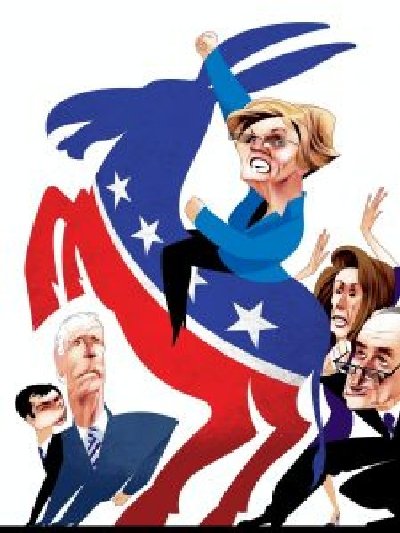 Despite 30 million Americans losing their jobs, domestic violence, and suicides on the rise, Democrats and fake news media are terrifying Americans into believing the lockdown must continue. These evil people are fully committed to using the coronavirus to stop Trump’s reelection.

I scratch my head thinking, “Don’t these wacko leftists realize that if they destroy America, their livelihood is destroyed as well?” Democrats and fake news media’s hatred for Trump and his voters and their desire to block him from making America great again, again, overrules logic. Their behavior is like the wicked queen in the Disney Snow White movie. Her hatred for Snow White was so great that she sacrificed her beauty, transforming herself into an ugly old witch to deceive and destroy Snow White.

Democrats and fake news media will sacrifice America if it means destroying Trump. These people must be defeated.

Sadly, half the country still does not realize that Democrats and fake news media are tag-team partners in transforming America into a socialist/communist nation.

Before my lifelong Democrat dad, Dr. Rev. Lloyd E. Marcus passed away at age 90, I tried to inform Dad that his workingman party had been hijacked by the 1960s hippies. Hippies (Democrats) also took over Hollywood, mainstream media, and public education decades ago. Consequently, they created a generation of young adults who hate America, hate the God of Christianity, and believe their parents are stupid, racist, sexist, and homophobic.

Long gone is the mindset of the TV show, “Father Knows Best.” “Family Feud” game show surveyed 100 people. “Who would you ask for advice?” Not one person of those surveyed said they would seek counsel from their father. Wow!

For many years, I have tried to educate my family and friends to the truth that Democrats are not our friends. Everything they desire to do is harmful to Americans. The Democratic party has been taken over by a spirit of anti-Christ. Every policy they seek to implement is rooted in their belief that they are smarter than God, desire to overrule God’s original intent and mission to ban God from our culture.

Daring to be an independent thinker speaking the truth about Democrats gets me called names; a self-hating n*****, stupid, Republican, and Uncle Tom sellout. I challenge you to research and prove my observation of Democrats wrong.

Democrats and fake news media are all over TV absurdly saying that because of COVID-19, we can never return to normal life in America. For crying out loud, viruses have been around since the beginning of time. Suddenly, because of one flu virus, Democrats say we must wear masks and social distance forever. God did not design or intend for us to live like that. But then, Democrats believe they are smarter than God. Folks, there is no scientific data that supports social distancing.

Knut Wittkowski, Ph.D., said that elderly and people with immune issues should be protected. Wittkowski said forcing the masses to social distance is harmful because it delays herd immunity which makes the virus last longer. “…we should not believe that we are more intelligent than Mother Nature was when we were evolving. Mother Nature (God) was pretty good at making sure that we’re a good match for the diseases that we happen to see virtually every year.”

Dr. Judy Mikovits said that by wearing masks, we are breathing in our own germs.  I witnessed this at a local store. The clerk was struggling to breathe. “What is wrong with you?” I asked with concern. She said the mandatory requirement that she wear a mask was stupid because it blocked her from breathing fresh air.

Virologists say we are doing the opposite of what we should be doing to deal with coronavirus. We are lowering our immune system by sheltering-in-place, wearing masks, and killing our good bugs by overusing hand sanitizer.

And yet, Democrats are using coronavirus to implement crazy policies such as never again allowing church gatherings over 50 people. These Democrats are crazy and evil.

Most of my family and friends who are Christians still do not realize that Democrats are obsessed with overruling God’s original intentions. A Democrat memo exposed their desire to legalize 12 new perversions which include pedophilia and bestiality.

Democrats are masters of deceiving and bullying the public into surrendering to anti-God cultural norms. Here’s how they will normalize pedophilia and bestiality.

I’ve seen articles and heard college lectures that pedophiles are born that way. Therefore, pedophilia is simply another God-given sexual orientation. Hollywood will produce movies portraying pedophiles as victims of our intolerance. Expect a new “groundbreaking” TV sitcom titled something like, “Suzy Loves Daddy,” a hilarious comedy about a goofy lovable dad who married his daughter.

Democrats and fake news media will gang attack anyone who dares to criticize the immoral show. They will say, “love is love.” Sadly, Christians will say, “’Suzy Loves Daddy’ is so funny!” Then, they will say, “Jesus loves everyone” which means good Christians should embrace every perversion. Suddenly, pedophilia and incest are normalized, featured in movies, TV shows, and commercials from home improvement to diet and exercise. Pedophilia and incest will skyrocket. Your kids will view you as an out-of-touch dinosaur for not embracing “loving” pedophile and incestuous relationships.

Next up, Democrats will force us to normalize bestiality; sex between humans and animals. The Oscar-winning movie, The Shape of Water is a major step in normalizing bestiality.

Believing they are smarter than God, Democrats outrageously seek to legalize aborting babies even after they are born to save the planet from overpopulation. Democrats outrageously say it is not a human being with rights unless the mother says so. How can any Christian think this is right? God said, “Before I formed you in the womb, I knew you…” (Jeremiah 1:5)

I could go on and on with examples of how Democrats and fake news media believe themselves smarter than God. “Professing themselves to be wise, they became fools.” ( Romans 1:22)

Democrats are hellbent on prolonging this insane unscientific lock-down for as long as they can get away with it. It is Democrats’ most destructive effort thus far to attack America, destroy Trump, and assume the role of God.