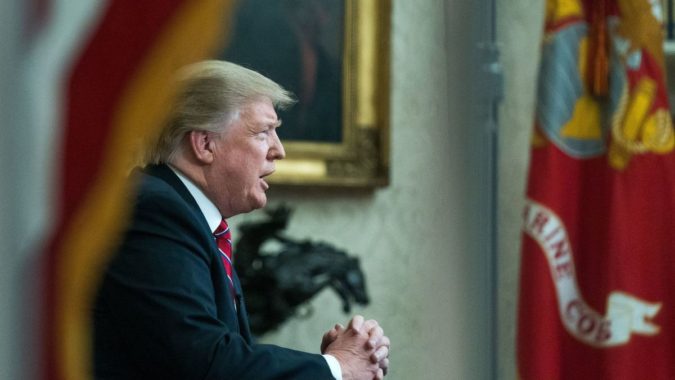 The Chinese virus has been treated as just a natural occurrence or unfortunate incident that necessitates that we have to cede more power over our lives to what critics have long called the Medical Deep State. Under pressure from a foreign threat, President Trump has relied on these health care “professionals.” But the result has been stories from the Washington Post about “How the Trump administration lost control of the coronavirus crisis” and the New York Times about how “The Coronavirus Is Coming for Trump’s Presidency.” This is the new narrative designed to bring down Trump.

The President has another option: put the military in charge of the coronavirus response and move quickly to a war footing with Communist China, the source of the outbreak.

Financially, in a major blow to the U.S. capitalist system and the world economy, more than $6 trillion in wealth in global stock markets was erased in one week over fears that the virus has been mishandled and the disease is spreading. China has been hit hard, too, but is able to recover more quickly because its economy and population are under the tight control of the communist dictatorship. It has more than enough people to sacrifice in a war with the West.

Conservative writers such as Matt Margolis note that President Trump was quick to ban travel with China, despite opposition from the U.N.’s World Health Organization (WHO). This was a decisive step. But the U.N. agency had also failed to act quickly to label coronavirus an international health emergency, and U.S. agencies such as the Centers for Disease Control (CDC) and the Food and Drug Administration (FDA) botched the approval and roll-out of reliable tests for the disease. These testing failures have facilitated the spread of the disease and have been seized upon by the media as evidence of the Trump Administration’s incompetence.

At the same time, basic skepticism about the nature of the mystery illness has been suppressed, in the name of stopping “conspiracy theories,” as new developments raise more suspicion over the source and timing of an “outbreak” that is almost certain to become a pandemic, cause a recession, and threaten President Trump’s reelection effort. The deadly disease originated in a region also known for the Chinese Wuhan Institute of Virology, which conducts “research” on viruses that include SARS and the deadly and incurable HIV.

It looks like Trump was set up. “Now Trump Needs the Deep State to Fight Coronavirus,” gloated an online headline over an article by Ronald Klain, Obama’s Ebola czar. He insisted that Trump had to “work closely with foreign leaders and global institutions” in order to confront “a global-health security challenge.” But the WHO’s record is checkered at best. It now stands accused of conducting unethical vaccine experiments on 720,000 children in Africa without parental consent.

On March 3, we learned that the world’s first experimental coronavirus or COVID-19 vaccine was “administered” to the People’s Liberation Army (PLA) General Chen Wei and 6 other Communist Party members. A photograph showed the communists getting the vaccine in front of a flag with a communist hammer and sickle.

It seems strange that the Chinese have developed a vaccine so quickly, after our own “public health professionals” have been telling President Trump that it will take many months, even a year, to get a reliable vaccine approved. China has also patented an anti-viral drug created by an American firm that is being used experimentally to treat the disease.

What’s also fascinating is that the photo was posted by Yanzhong Huang, a senior fellow for global health at the Council on Foreign Relations (CFR) and “expert” on “global health governance.” Incredibly, he has just written an article for the CFR journal Foreign Affairs saying that the nature of the coronavirus crisis justifies more military-to-military exchanges between the Chinese PLA and the Pentagon. This is how, he claims, we can reduce mistrust between the two nations. He is also very concerned about “conspiracy theories,” including a scientific paper that the virus’s protein sequence included elements of HIV, the deadly virus causing AIDS.

The globalist point of view is that we should accept what the public health professionals in China and the U.S. are saying. Anything to the contrary has to be tagged as a conspiracy theory and countered by information from the U.N.’s WHO. Indeed, WHO executive director Tedros Adhanom Ghebreyesus has thanked Google, Facebook, Pinterest, Twitter, and other companies “for their efforts to direct users” to the WHO “and other credible sources of information.” A petition labels Tedros as a tool of China and faults the WHO’s initial failure to declare the virus a public health emergency. It calls for his resignation.

Even the CFR health expert, Yanzhong Huang, went on to say, “The [Chinese] government’s actions have lent credibility to the thesis that the coronavirus accidentally escaped a laboratory.” He noted, “In February, China appointed Major General Chen Wei, China’s top biowarfare expert, as head of the BSL-4 laboratory at Wuhan Institute of Virology. Because of Chen’s background, the appointment fueled suspicions about the virus’s possible connection to the BSL-4 lab.” This is the same general getting the vaccine.

Interestingly, after the Chinese admitted the virus was on the loose, the PLA announced that it had sent in a total of 2600 “medical personnel” to deal with the epidemic. It looks like a case of the PLA protecting military secrets, perhaps a bioweapon.

Another so-called public health professional, former Obama CDC Director Tom Frieden, has now joined the CFR as Senior Fellow for Global Health. He is president and CEO of Resolve to Save Lives, an initiative that received $225 million from Bloomberg Philanthropies, the Bill & Melinda Gates Foundation, and Gates Philanthropy Partners,  which is funded with support from the Chan Zuckerberg Foundation (named for the founder and CEO of Facebook and his wife). Frieden’s goal is “adequate funding for global public health.”

In a statement on the bill signed by Trump that sends $8.3 billion more to the public health professionals, he said that Congress should “protect the United States through global partnerships that will tamp down COVID-19 and make the world safer from the next epidemic.” That implies more cooperation with the U.N. and China.

The group’s Senior Vice President, Amanda McClelland, participated in a  National Press Club event “to provide guidelines for journalists on responsible, proactive coverage of coronavirus.” One of the other participants was Dr. Nancy Messonnier, director of the CDC’s National Center for Immunization and Respiratory Diseases and the original spokesperson for the CDC’s response to the coronavirus crisis.

Suspicions about the “responsible” nature of the advice were raised when Messonnier warned early on that “It’s not so much of a question of if this will happen anymore but rather more of a question of exactly when this will happen.” This took President Trump by surprise since the “professionals” had been assuring him that everything was under control and that COVID-19 was a flu-like virus that would be contained.

Then it came out that Messonnier was former Deputy Attorney General Rod Rosenstein’s sister. Recall that when Attorney General Jeff Sessions recused himself from the Russia investigation, Rosenstein was in charge and eventually appointed former FBI director Bob Mueller as Russia-gate prosecutor. Muller’s reign as FBI director was characterized by a failure to pursue evidence demonstrating that al-Qaeda was responsible for the post-9/11 anthrax attacks.

At this point in the crisis over coronavirus, it is not too late to consult the report issued by former Senator Tom Coburn M.D., “CDC Off Center,” about how the federal agency wasted hundreds of millions of tax dollars for failed prevention efforts and has been ineffective in controlling the disease. A case in point is the billions wasted on more than 30 years of research into an HIV/AIDS vaccine.

Even before Trump was elected, a group called CDC Spider, for CDC Scientists Preserving Integrity, Diligence and Ethics in Research, had emerged, alleging that the federal agency is too cozy with corporate and special interests and outside parties. One of the complaints was that domestic staff resources were taken away from domestic priorities to work on global health issues.

As a result of this globalist perspective, the federal National Institutes of Health became a “partner” with the Wuhan Institute of  Virology. This kind of “cooperation,” now being touted as the solution to the crisis, did not stop the crisis from developing in the first place.

Coronavirus looks like a military threat, even an Act of War inflicted by China on the United States and the world. With President Trump’s approval, military medical leaders could now take the lead in solving the crisis. Emergency measures are needed.