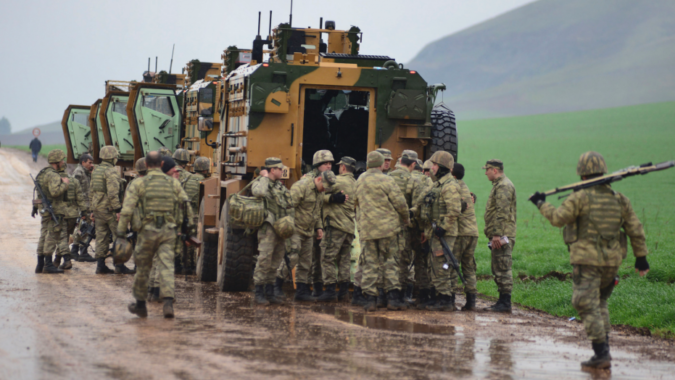 It was and still is a nasty conflict in Syria, Iraq and even in Turkey. The Islamic State lost its control of landmass but the terror group(s) still operate in various locations.

The Pentagon’s Office of the Inspector General, which was released to the public on Tuesday, shows that most of the CTEF weaponry’s whereabouts cannot be verified. The reason, according to the audit, is that officials with the Special Operations Joint Task Force – Operation Inherent Resolve, failed to maintain detailed lists of all military equipment given to Washington’s allies in Syria between 2017 and 2018. Officials did not have a centralized depository facility for dispensing the equipment, and no documentation was kept during the operation, according to the audit. Consequently, thousands of weapons, weapons parts, and other military hardware were exposed to “loss and theft”, says the Pentagon report.

In December 2018, the DoD began planning for the safe, professional withdrawal of U.S. personnel from Syria while maintaining its efforts to defeat ISIS. For FY 2020, the DoD budget requested $300 million, including $173.2 million for weapons, ammunitions, vehicles, and other CTEF-S equipment, to ensure the enduring defeat of ISIS. The FY 2020 DoD budget request states that equipping, sustaining, and enabling the VSO is critical to the DoD’s approach. The relationship between U.S. forces and the VSO relies heavily on the DoD’s ability to provide weapons, ammunitions, and equipment. Furthermore, the FY 2020 DoD budget request states that the VSO’s combat effectiveness, movement, and operational tempo are directly linked to U.S. support, including the provision of weapons, ammunition, and equipment.

1st TSC personnel did not properly store or secure CTEF-S equipment at the BPC Kuwait warehouse in accordance with DoD guidance, Army regulations, or SOJTF-OIR standard operating procedures. For example, 1st TSC personnel stored weapons outside in metal shipping containers, exposing the equipment to harsh environmental elements, such as heat and humidity. This occurred because SOJTF-OIR personnel did not divest or dispose of CTEF-S equipment, which led to overcrowding at the BPC Kuwait warehouse. In addition, according to 1st TSC’s inventory records, 1st TSC personnel stored 4,144 Category II weapons (sensitive weapons), such as machine guns and grenade launchers, outside in metal shipping containers and not in a facility that met the requirement for storing Category II weapons.

For FY 2020, the DoD budget requested $173.2 million for weapons, ammunitions, vehicles, and other CTEF-S equipment. Without accurate accountability records, such as inventory records and hand receipts, SOJTF-OIR personnel could order equipment that SOJTF-OIR already has in stock, risking unnecessary spending of CTEF-S funds and further overcrowding the BPC Kuwait warehouse resulting in equipment being stored outside.

Furthermore, SOJTF-OIR and 1st TSC personnel left thousands of CTEF-S weapons and sensitive equipment items vulnerable to loss or theft. Without conducting consistent inventories and ensuring proper security for CTEF-S equipment, 1st TSC could not determine whether items were lost or stolen which could delay the initiation of an investigation.

We recommend that the Commander of SOJTF-OIR develop a central repository system for all documentation required to support CTEF-S equipment requested on the memorandum of requirement through the entire divestment process.

We recommend that the Commander of SOJTF-OIR develop guidance for the proper disposal of CTEF-S equipment stored at the BPC Kuwait warehouse that has been declared unserviceable.

Additionally, we recommend that the Commander of 1st TSC complete a physical security inspection periodically, but no less than every 18 months, and ensure corrective action is taken to fix new and existing security issues identified.

Management Comments and Our Response

During the audit, we advised SOJTF-OIR and 1st TSC of the deficiencies within the CTEF-S program for the accountability and security of CTEF-S equipment. SOJTF-OIR and 1st TSC personnel agreed with our findings and immediately initiated corrective actions. SOJTF-OIR personnel stated that SOJTF-OIR created a shared drive portal for all documentation for CTEF-S equipment from procurement through divestment, including memorandums of requirement, purchase orders, equipment received, inventories completed, hand receipts, transfers, and divestment packages. 1st TSC has already started providing its hand receipts and completed inventory documents to SOJTF-OIR for inclusion in the shared drive. As of January 2020, SOJTF-OIR is using this shared drive portal to store documentation for CTEF-S equipment, such as inventories, lateral transfers, and hand receipts. The actions taken addressed the specifics of Recommendation 1 to establish a central repository for all documentation required to support CTEF-S equipment requested on the memorandum of requirement through the entire divestment process; therefore, Recommendation 1 is closed.

On May 31, 2019, U.S. Central Command developed and began implementing a disposal plan for unserviceable equipment purchased for the VSO, including items stored at the BPC Kuwait warehouse. CJTF-OIR personnel stated that this plan will reduce the amount of CTEF-S equipment currently stored at the BPC Kuwait warehouse, and equipment will no longer need to be stored outside the warehouse exposed to the harsh elements. Furthermore, in November 2019, CJTF-OIR personnel confirmed that disposition guidance for unserviceable CTEF-S equipment was received from U.S. Central Command and that unserviceable CTEF-S equipment will be provided to the Defense Logistics Agency or disposed. The actions taken addressed the specifics of Recommendation 2 to develop guidance for the disposal of unserviceable equipment; therefore, Recommendation 2 is closed.

During our February 2019 followup site visit, the audit team verified that 1st TSC personnel had started taking corrective actions to address the security deficiencies on the issues the audit team identified during the initial site visit. The actions taken addressed the specifics of Recommendation 3 to complete a security inspection and address security issues; therefore, Recommendation 3 is closed.