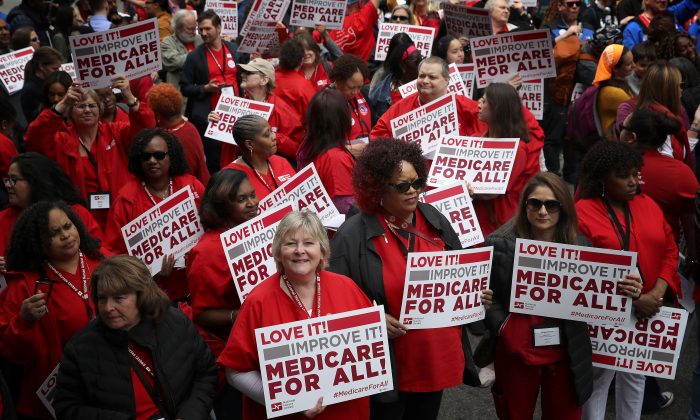 By: Trevor Loudon | The Epoch Times

This country’s largest Marxist group, the Democratic Socialists of America (DSA), has been working hard for socialized health care since 1994.

At the DSA’s July 2017 national convention, held in Chicago, delegates voted to make “Medicare for All”—DSA’s latest euphemism for government-controlled health care—“a national priority.” While building grassroots support has been a big part of the DSA’s strategy, the comrades know that this means little without congressional voting power. Consequently, the DSA has put huge resources into lobbying, cajoling, and even bullying Congress members into supporting “single-payer” or socialized health care bills.

The DSA gives us a textbook example of how a disciplined group of socialist activists can skillfully manipulate legislators into supporting bills they would otherwise run from. While the DSA mostly targets socialist-leaning Congress members, it’s still often an uphill battle, as most politicians, even members of the far-left Congressional Progressive Caucus, are often fearful of taking any kind of a controversial stand.

Here’s how the DSA flips your congressional representatives.

On Sept. 17, 2017, a group of around 30 organizers with the Northern Virginia branch of the Metro D.C. DSA attended Rep. Don Beyer‘s town hall in McLean to ask him to support H.R. 676. Otherwise known as the Expanded and Improved Medicare for All Act, H.R. 676 had been pushed for years by long-time DSA ally and then-Rep. John Conyers (D-Mich.). While Beyer is a member of the Congressional Progressive Caucus, he was still reluctant to go full-on socialist in what was until recently a Republican state.

The socialists were so excited by the results they put out a press release:

“Members of DSA from Virginia’s 8th Congressional District advocated for single-payer health care at a town hall on September 17 hosted by U.S. Rep. Don Beyer (D). Congressman Beyer had yet to co-sponsor H.R. 676. … To encourage him to sign on, Beyer’s DSA constituents shared personal stories of how the current health-care system has failed them and their families. …

“At the town hall, Congressman Beyer hedged at first. He noted that he and his staff ‘are committed to fixing the Affordable Care Act.’ He also said that HR 676 has a few problems. ‘We’re waiting until Bernie’s Medicare for all bill reaches the house, and we’ll take the best of HR 676 and Bernie’s bill,’ he said. In the end, however, he agreed to support HR 676. ‘I’ll sign off on HR 676 in the morning,’ he said.

“‘We started out with 15 people in a playground and now look at us,’ he said. ‘After the 2016 election, I realized that we couldn’t depend on just showing up and voting. I realized that if things were going to change, we’d have to do it ourselves, all of us, together. Together, we are powerful.’”

In August 2018, Beyer became a founding member of the Medicare For All Congressional Caucus.

“Today we met with Salud Carbajal as part of a coalition led by Santa Barbara resident and Medicare for All hero Ady Barkan. Salud listened to our healthcare horror stories, agreed that healthcare is a right and Medicare for All should be our goal, but stopped short of signing on to Medicare for All (H.R. 1384) even as he cited that it would save us $2 trillion dollars and prevent millions of deaths. Why won’t Salud sign on to this bill if he agrees with us? Does he lack the courage necessary to stand with us and fight?”

But it appears that Barkan’s heartfelt appeals won the day.

On June 28, Barkan ecstatically wrote on Twitter: “I’ve got some exciting news! Rep. Carbajal just told our coalition that he will cosponsor Medicare for All.”

Though Rep. Lloyd Doggett has worked with the DSA since the 1980s and recently joined the Congressional Progressive Caucus, he was still a little shy of supporting socialized health care in conservative-leaning Texas. It took the DSA a while to flip him—but flip him they did.

“After over a year of going door to door talking to Rep. Lloyd Doggett constituents, we have WON our campaign to get Lloyd Doggett to sign onto Medicare for All.

“Austin DSA knocked on the doors of well over 10,000 of Doggett’s constituents in Austin. We made videos to share the stories we heard from his constituents, we pressured him on social media, we showed up to his in-person events in Austin and San Antonio, and together we made this happen.

“This would not have been possible without a strong coalition of progressive and labor groups to make this happen: so huge thanks to our partners at San Antonio DSA, Texas Organizing Project, National Nurses United, Our Revolution, Our Revolution – Texas, Labor Campaign for Single Payer, Physicians for a National Health Program, and of course Democratic Socialists for Medicare for All.”

Philadelphia-based Dustin Guastella, chair of the DSA Medicare for All campaign, made it very clear that Doggett was heavily targeted because of his very influential position in Congress.

“Doggett’s sponsorship is especially important because he sits on the powerful Ways and Means Committee which Medicare for All must pass on its way to floor vote in the House,” he wrote in a May 26 DSA memo.

He also reiterated the power of an organized minority:

“The path to single payer is real and that path runs through mass politics. No great reform is brought about without the pressure of organized and mobilized working people. Our success depends on an army of campaigners knocking doors, bird-dogging politicos, educating in town-halls and agitating in our unions. As we pressure legislators to endorse Medicare for All we are creating a litmus test: Will they stand with the insurance oligarchs or workers? Will they stand with their donors or their constituents? The rich or the rest of us?

“Doggett is just the start. This is our power and it’s time to build it.”

This is How Communists Win

Despite their small numbers, small “c” communists such as the DSA are able to win public policy changes that affect hundreds of millions of people. The DSA is about 60,000 members strong, which is enough to give the organization a significant presence in almost every congressional district in the country.

Together with allies such as the Communist Party USA, Our Revolution, and sympathetic unions, the DSA is able to pressure almost any Congress member it needs to influence. Many leftist Congress members are already on board with the DSA’s Marxist agenda and don’t need much prompting. Others who may be looking at a tight reelection race need a lot more pressure—which the DSA is more than willing and able to apply.

Most Americans like to see politics as an expression of the will of the people.

The DSA and its Marxist allies are more cynical. They see politics as an expression of organized and strategically concentrated raw power.

If the United States ever falls to the tyranny of government-controlled health care, it will not be because of the popular will. It will be because a few thousand committed and well-organized “communists” made it happen.

This is how Marxist politics actually works.

Trevor Loudon is an author, filmmaker, and public speaker from New Zealand. For more than 30 years, he has researched radical left, Marxist, and terrorist movements and their covert influence on mainstream politics.