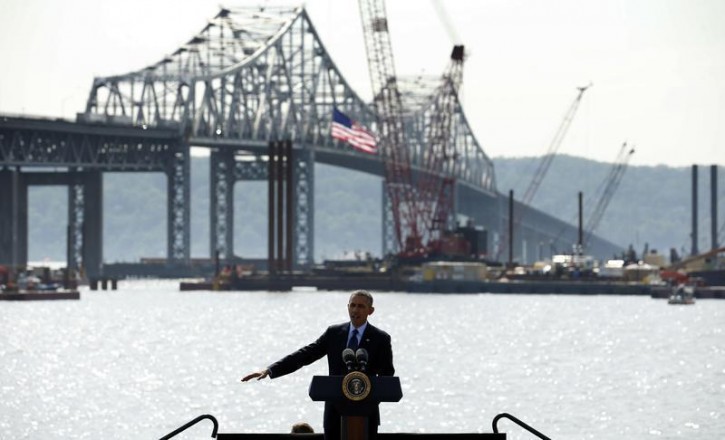 In order to restore the sovereignty of the states, Americans MUST demand that their state legislatures stop taking federal taxpayer dollars.

“From the beginning the constitutionality of appropriations for the construction of roads was warmly [adamantly] denied, and by none more steadily than by the successive presidents, Jefferson, Madison and Monroe. All of them refused to be convinced that the building of roads in different parts of the country was such a matter of ‘general welfare‘ as to justify the expenditure of the public moneys.” – American Political History, 1763-1876, Volume 1, By Alexander Johnston

During the financial crisis of 2008, Presidents George W. Bush and Barack Obama assured Americans that some banks were “too big to fail.” Hard earned tax payer dollars were immediately needed to be used to bail out banks and then, the auto industry.

“I had to abandon free market principles in order to save the free market system.” – George W. Bush

Bringing money home for “roads and bridges” is one of the favorite vote-getting tools of the left, and sadly, the so-called “right.” Even local politicians scramble to bring federal dollars into their respective states for “infrastructure.”

Whether or not the intent is to get votes, throwing federal taxpayer money at individuals or states – often with strings attached – only promotes one thing: Government Dependency.

While fully acknowledging the merits of the project, President James Madison vetoed John C. Calhoun’s Bonus Bill of 1817 that would have provided federal money for the Erie Canal.

“I am constrained by the insuperable difficulty I feel in reconciling the bill with the Constitution.”

The Erie Canal was still constructed. But the federal government did not pay for it. Where there is a will, there is a way. One would think that James Madison, the “Father of the Constitution” would understand the intent of the Constitution, but that did not stop Congress from relentlessly putting forth legislation to fund projects using federal dollars.

As an aside, while John C. Calhoun (who later became Andrew Johnson’s Vice President) was initially one of the main proponents of taking federal money for state projects, he later completely reversed his position. In fact, he “secretly wrote an essay” where he “asserted that states had a constitutional right to nullify any federal government actions they considered unconstitutional.”

The ongoing pressure to use federal funds for local projects, including the Bonus Bill which had already been vetoed by Madison, prompted President James Monroe to suggest an amendment to the Constitution in his “Special Message to the House of Representatives Containing the Views of the President of the United States on the Subject of Internal Improvements.”

Persistence paid off eventually. On March 14 1818, a resolution was passed in the House of Representatives that Congress had the power to appropriate money for the construction of roads and canals, but President Andrew Jackson “also vetoed several bills providing for internal improvements.”  When pressured to agree to agree to the Maysville Road Bill in May 1830, Jackson reportedly snapped,

“Are you willing…are my friends willing to lay taxes to pay for internal improvements? For be assured I will not borrow a cent except in case of absolute necessity!”

Using federal funds to pay for roads and bridges despite the intent of the Constitution, of course, was just the beginning.

Ramping up government dependence during the Great Depression

During the early days of the Great Depression, the federal government was not involved in emergency relief. President Herbert Hoover established the Emergency Relief Administration (ERA) for the purposes of loaning federal funds to state governments.

Changing the relationship between Americans and the federal government forever, Franklin Delano Roosevelt used the Great Depression to justify a massive infusion of federal aid to state governments between 1933 and 1938 in the form of various “experimental projects and programs, known collectively as the New Deal…”

During his State of the Union Address in 1935, FDR pushed his massive “relief” programs but also said something curious:

“The lessons of history, confirmed by the evidence immediately before me, show conclusively that continued dependence upon relief induces a spiritual disintegration fundamentally destructive to the national fiber. To dole our relief in this way is to administer a narcotic, a subtle destroyer of the human spirit. It is inimical to the dictates of a sound policy. It is in violation of the traditions of America. Work must be found for able-bodied but destitute workers.

The Federal Government must and shall quit this business of relief.”

Evidently, this sentiment was necessary in assuring Americans that the federal government’s “business of relief” would be temporary.

According to Robert Rector, a specialist on welfare and poverty at The Heritage Foundation, the war on poverty has been a failure when measured by the overall amount of money spent ($20.7 trillion) and how poverty rates haven’t changed significantly since Johnson gave his address back in 1964. Not withstanding, during the Obama administration the poverty level has reached a 50-year high. Rector went on the say that President Obama’s anti-poverty effort “are basically to give more people more free stuff.” That’s exactly the opposite of Johnson’s goal which was “to make people prosperous and self-sufficient.”

According to Rector, too many government anti-poverty programs still discourage marriage. Statistics show how more than four in 10 children are born to unmarried parents. When the war on poverty started, about 6 percent of children were born outside of marriage.

As benefits swelled, welfare came to serve as a substitute for a breadwinner husband at home through the marginalization of the men who had heretofore headed those families. It is inconceivable today that a record 47 million Americans receive food stamps. That is about 13 million more than when Obama took office.

In commemoration of the 50 years and the $20 trillion spent since President Johnson used his State of the Union address in 1964, to declare his unconditional War on Poverty in America, the Wall Street Journal on January 7 published an opinion piece by Robert Rector: “How the War on Poverty Was Lost.”

What an unmitigated disaster. We never learn, no matter how bad the outcome. What do we do?  We double down and believe more welfare will be better.

In order to restore the sovereignty of the states, Americans MUST demand that their state legislatures stop taking federal taxpayer dollars.

See which states are the most dependent on the federal government:

As states and individuals become more and more dependent on the federal government, the spirit of America becomes further eroded. Americans must resist federal money being pushed into their states, often with dangerous strings attached. Additionally, this infusion of federal dollars being doled out in the form of grants, lawsuit settlements and public/private partnerships must be severely curtailed if Americans still believe in a government of the people, by the people, for the people.

3 thoughts on “The ‘Roads and Bridges’ Lie”