Here is the difference between Dante, Milton, and me. They wrote about hell and never saw the place. I wrote about Chicago after looking the town over for years and years. – Carl Sanberg

GRAPESHOT, n. An argument which the future is preparing in answer to the demands of American Socialism. – Ambrose Bierce, The Devil’s Dictionary

This week’s winning essay is The Noisy Room’s – Chicago’s Communists Lead Anti-Cop Protests Over McDonald Shooting, in which she provides us with an inside look at who’s leading the Chicago protests over the shooting of one Lauchan McDonald by the police. Here’s a slice:

Guess who’s behind the protests in Chicago? Old, white communists from the ’60s – again. These agitators helped organize and coordinate last week’s protests in Chicago over the shooting death of Laquan McDonald. He was a 17 year-old black thug. A dashcam video shows him being shot 16 times by a white police officer. Cue the riots led by Jesse Jackson and Al Sharpton.

These communists belong to the Revolutionary Communist Party. They are a far-left Maoist group who is all for violent revolution.

The festivities began at about 4 pm last Wednesday, downtown on the corner of Jackson and State Streets. The night before, these same communists enthusiastically handed out fliers stating their intention to be the driving force in the protest movement there. Retirement is so boring. 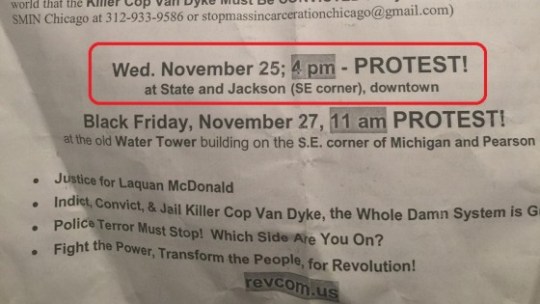 It didn’t start out as much of a protest evidently, but that changed as they made their way to downtown Chicago. Hundreds gathered to follow the radicals. The communists worked diligently together carrying a bullhorn, a connected loud speaker and a carefully crafted sign from an October protest in New York City. The primary agitator at the protest screaming nonstop into the bullhorn with a barrage of chants was longtime communist Chicago activist Grant Newburger.

Newburger claimed to be the leader of the Revolutionary Communist Youth Brigade when he was in his 40’s. Now he’s 57 and still at it. During Wednesday’s protest, he kept shouting to the crowd political stances pushing his communist agenda. Newburger and other communists urged people to show up for the protest on Black Friday, so they could shut down the “Magnificent Mile.” Newburger led moronic chants like, “16 shots!” Another shout-back recital was: “CPD. KKK. How many kids did you kill today?”

Here is Newburger in 2007 at his apartment in the now-demolished Cabrini–Green public housing project. (Note the prominent poster of Chairman Mao on the wall.) 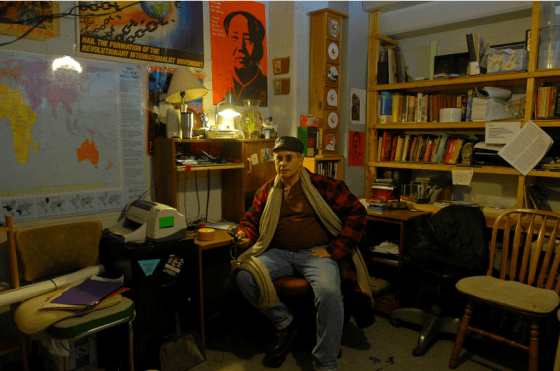 Enter another commie, Lou Downey. He’s also a member of the Revolutionary Communist Party. “Send the killer cops to jail,” Downey urged protesters to chant. He was followed by yet another middle-aged white communist woman yelling into the bullhorn.

The meandering crowd was halted by police around 6 pm on Wednesday before they could get to Lake Shore Drive, which is a bustling thoroughfare. So, they turned around and headed south. They eventually made their way to the Trump International Hotel & Tower blocking traffic as they went. “We are the people! The mighty mighty, mighty people,” was a communist agitator-led chant. Also: “Whose streets? OUR STREETS!” These people need to get some seriously new chants going. It’s trite. In front of Trump’s place, protesters yelled “hands up, don’t shoot” at an assembled throng of police officers. What an insult and a lie to boot.

“How many bullets in the clip?” an enraged white protester shouted at the cops while marching. “Fuck y’all.” “We are not products! We cannot be bought or sold!” was another Mensa moment. Next in line were the offices of ESPN radio and the local ABC affiliate.

By 9 pm, the white-communist-led protesters had made their way to the south Loop chanting “fuck the police.” Also: “We’re black. We’re strong. We’re marchin’ all night long.” If they weren’t so violent and dangerous, I’d compare them to four year-olds who are colorblind. For kicks, when they got to Millennium Park, they ripped the lights from the City of Chicago Christmas tree. If there’s one thing commies hate more than cops, it’s Christians.

From the beginning of the protests across the nation, including the Occupy movement and now Black Lives Matter, I have said that you would find communists behind the radicals. The Revolutionary Communist Party is a big player in all this, with their aging hippie Marxists who feel this is their last chance to cause upheaval in the nation. They have always hated the police and now they have a vehicle to work on that hatred. Charlie Manson would be proud.

You saw these same people in Ferguson, Missouri. They paid protesters and were behind the movements there. Now they are in Chicago. But trust me, wherever you see racial division and violent chaos in the streets, the communists are not far behind. And not all of them are old… there are a lot of young ones joining the ranks these days.

“We are revolutionaries,” Downey, the well-traveled communist agitator, told The Kansas City Star in August 2014. “We’re working to do this in a way that puts an end to the system that for generations has criminalized youth, especially black youth.”

In our non-Council category, the winner was Matthew Bracken with an interesting piece, Tet, Take Two – Islam’s 2016 European Offensive, submitted by The Noisy Room. In it, Mr. Bracken discusses his views on Islam and makes some interesting predictions on what he feels is in store for Europe. Strictly speaking for myself, I think he’s mostly right on but misses some important factors, something I plan to comment on over at my place shortly. Definitely a must read.

Here are this week’s full results. Only The Independent Sentinel was unable to vote, but was unaffected by the usual 2/3 vote penalty for not voting: