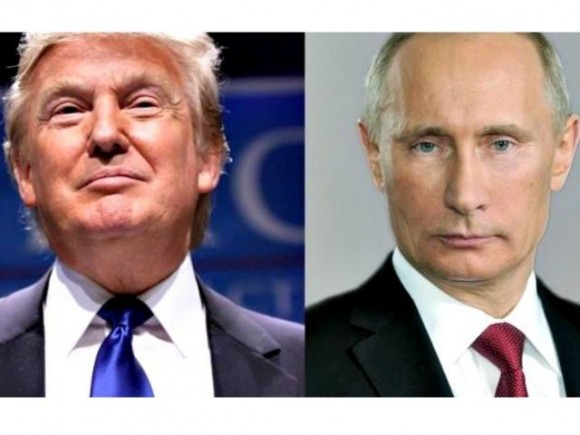 The phrase “follow the money” is supposed to help explain human behavior, especially in politics. So why has Donald Trump embraced Russian President Vladimir Putin? Why has he denied the evidence of Putin’s killing of Russian journalists and dissidents? A savvy businessman, Trump is certainly not dumb. There must be something else to it.

Reports dating back to 1987, during the time of the old Soviet Union, reveal that Trump has been seeking business in Russia and attempting to build a “Russian Trump Tower” in Moscow and perhaps other Russian cities.

At this particular time in history, with Putin’s cronies under financial sanctions because of the Russian invasion of Ukraine, Putin’s praise for Trump may signal another attempt to get the capitalists and their money back into Russia. Such a ploy depends on Trump and others rehabilitating Putin by claiming that he is fighting terrorism in Syria, not bolstering a long-time Soviet/Russian client state. Thanks to the effectiveness of the Russia Today (RT) channel, which saturates the U.S. media market, especially cable television, Putin is indeed looking like a statesman on the world stage.

Trump’s relationship with Russia goes far back. In 1987, before the collapse of the Soviet Union, he was meeting with Soviet officials and negotiating the building of “luxury hotels” in Moscow and Leningrad. A story at the time said Trump had met Soviet Ambassador Yuri Dubinin, who mentioned how much his daughter had admired the “opulent” Trump Tower in New York City. This led to an invitation to Trump to visit the USSR. The story said Dubinin wrote a letter to Trump, who hosted a meeting with Soviet officials in New York.

The invitation to Moscow was issued by Intourist, the giant Soviet in-country travel organization which operated all the hotels for foreigners in the Soviet Union. Intourist was created in 1929 by Joseph Stalin and run by KGB officials. Intourist hotels were designed for wealthy foreigners, and virtually all the Intourist guides were KGB informers. In fact, one aspect of their jobs was the recruitment of foreigners.

However, Trump expressed concern about “Soviet regulations on joint ventures, which require that the Soviets hold a controlling 51 percent interest” in such projects. Trump wanted majority control.

The book, The Global Emerging Market: Strategic Management and Economics, by Vladimir Kvint, said that as far back as 2008, the Trump Organization had registered its trademarks in Russia in the areas of real estate development and construction. Trump’s son, Donald Jr., said in an interview at the time that his father was looking at investing in Russia and China. These were considered top A-list countries. Donald Jr. is the executive vice president of Development & Acquisitions at the Trump Organization.

Trump wasn’t the only businessman who thought the new Russia would prove hospitable to foreign investment. American businessman Bill Browder ran an investment fund in Russia called Hermitage Capital. Once a Putin fan, he thought private property rights were going to be protected. However, he was deported in 2005, his assets stolen, and his lawyer, Sergei Magnitsky, was tortured and killed. Browder now says, “The Russian regime is a criminal regime. We’re dealing with a nuclear country run by a bunch of Mafia crooks. And we have to know that.”

Cases like that didn’t stop Congress in 2012 from voting for Permanent Normal Trade Relations (PNTR) for Russia. It passed the Senate by 92-4 and the House by 365-43. Despite the ominous trends, including Putin’s invasion of the former Soviet Republic of Georgia in 2008, big business thought a lot of money could still be made in Russia. In 2013, Trump was himself back in Russia holding his “Miss Universe” pageant. “I have plans to start business in Russia,” Trump told the Russian media. “I am currently in talks with several Russian companies to build a skyscraper on the model of Trump Tower in New York.”

One of Trump’s contacts was Russian billionaire Araz Agalarov and his company Crocus Group. He owned Crocus City Hall, where the Miss Universe finals were being held. He confirmed that his company, Crocus Group, had been participating in real estate talks with Trump. Later that year Agalarov was given an outstanding citizen award by Vladimir Putin at a ceremony held in the Kremlin. He has been called “The Donald Trump of Russia.”

Rather than treat China and Russia as business opportunities, Trump said in his 2011 book, Time To Get Tough, that China is “not our friend” and is stealing our jobs, technology, and military capabilities. It appears that a business relationship with China had soured since the time Donald Jr. was considering investing there. Trump’s attacks on China have been a big hit on the campaign trail.

Analyst Nevin Gussack says of Trump, “While his trade and immigration policies would strengthen our strategic and economic posture, his naiveté and ignorance of Russia and even Cuba is very disconcerting.” It appears that Trump has flip-flopped on the question of whether he would invest in communist Cuba.

As far as Russia is concerned, there’s no talk in the 2011 book of doing business with Putin. But Trump said that he “often speaks highly” of Putin because of his “intelligence and no-nonsense way.” An intelligence operative, Putin was in the KGB and ran one of the KGB’s successor agencies, the FSB.

Putin certainly has a “no-nonsense” approach to his perceived political enemies. Russian journalist Anna Politkovskaya was poisoned, miraculously survived, but was then later shot dead on October 7, 2006, which happened to be Putin’s birthday. She had been warning about the KGB’s return to power and was investigating the circumstances surrounding the kidnapping and murder of hundreds in the Beslan school massacre in southern Russia in 2004. This event, like the 1999 Moscow apartment bombings, was blamed on Islamists and gave Putin the opportunity, or pretext, to further consolidate his power over the military, the intelligence agencies, and the economy. He assumed virtual dictatorial powers.

The poisoning of Politkovskaya was a hallmark of the KGB’s “no-nonsense” way of doing business. Later that same year, dissident former FSB officer Alexander Litvinenko was murdered by poisoning in London, to which he had fled. He wrote the book, Blowing Up Moscow: The Secret Plot to Bring Back KGB Terror, about the FSB’s role in those 1999 Moscow apartment bombings. He had also named al-Qaeda’s number two man, Ayman al-Zawahiri, as having been trained by the KGB.

While Trump’s 2011 book denounced “Obama’s pandering to the Russians” in areas like sabotaging missile defense for our allies, he said Putin had a “grand vision,” the creation of a “Eurasian Union” to replace the USSR. He said Putin wanted to control oil supplies to all of Europe. This was an important insight into how Putin’s regime is not defensive, nor reacting to the U.S. and NATO, but is instead aggressive in foreign affairs and trying to dominate its neighbors. However, rather than explain what the Russians were up to with this “grand vision,” Trump went on to say “Hats off to the Russians” in getting their way with Obama.

One can fully understand taking Obama to task for giving in to the Russians. But praising the Russians for taking advantage of Obama reflects a trait that is all too common with many conservatives. Their disgust with Obama has blinded them to the nature of our enemies, who exploit his foreign policy to their advantage. They somehow think Putin is acting in America’s interests when Obama is not. That’s ludicrous.

In his latest book, Crippled America: How to Make America Great Again, Trump notes that Putin is “outmaneuvering” Obama in the Middle East. Trump calls Putin a leader, in contrast to Obama. But what is Putin leading? Trump refers to Iran as “Russia’s best friend,” without explaining the significance of its alliance with Russia. Trump also says in his book that he doesn’t understand “why Germany and other countries watched impassively as Putin marched into Ukraine.”

After the invasion of Ukraine and the shoot-down of the Malaysian plane by Russian-backed terrorists, Trump claimed, “I think I became much richer because I can understand people and read people and Putin is not finished. Putin has got a long way to go.”

Again, we are left thinking that Trump understands the aggressive intentions of Vladimir Putin.

Yet, when Trump was asked about the nuclear balance with Russia during the most recent Republican presidential debate, he displayed ignorance of the decaying nature of the U.S. nuclear triad, which constitutes our ability to deter and survive a Russian nuclear first strike.

It looks like Putin has outmaneuvered Obama and Trump. It is an opening for Trump’s opponents, especially Senators Ted Cruz (R-TX) and Marco Rubio (R-FL). But do they have the courage to “follow the money” and hold Trump accountable for doing business with a criminal regime that threatens the survival of the United States? At the end of this money trail they may find an explanation of why Trump is so reluctant to hold Putin responsible for his crimes.