Here are this week’s nominees…

The Monster Who Tortured And Abused This Dog

Don Surber: The known-only-to-God-and-the-Devil expletive who did this. The bastard.

The Noisy Room: I nominate for Weasel of the Week, Baltimore City State’s Attorney Marilyn Mosby for pulling an Anthony Weiner and claiming her Twitter account was hacked after two controversial tweets were “favorited” by a personal Twitter account belonging to her. The first tweet referred to the officers charged in the death of Freddie Gray as “those 6 THUG cops” and the other praised Mosby and claimed she “INFURIATES a certain kind of white person.” Her office is now claiming that these acts were conducted by some shadowy hacker. It’s amazing to me that these politicians can’t behave on social media and when they get caught, they always blame some nefarious nerd for their bad behavior.

“Both Mosby’s official Twitter account and her personal account were hacked,” the Baltimore City State’s Attorney’s Office reportedly told “The Kelly File” on Wednesday. “We do not know how long it’s been going on, we are working with Twitter.”

How convenient that only two Tweets were hacked on a Twitter account that wasn’t reported hacked at all – I’m sure it’s just a massive coincidence that the two Tweets are highly racist, offensive and just so happen to paint her as the cop-hater and grand-stander she really is. She’s just the kind of weasel Progressive that Obama hearts. 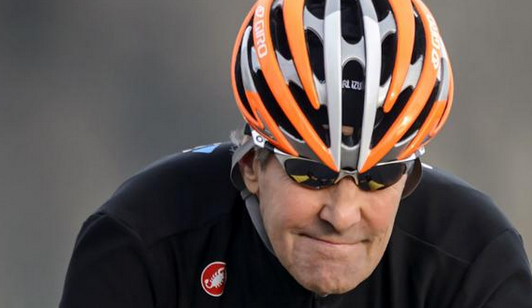 Secretary Of State John Kerry – Did You know He Served In Vietnam?

Virginia Right!: John Kerry took a break from negotiations with Iran on a nuclear deal to have a little fun in the world of competitive cycling. The rigors of the Tour de France circuit are pretty daunting. And Kerry is 71 years old. et he decided to risk his health and limb on a bicycle.

And he broke his hip or leg. Apparently the hip replacement surgery he had a while back is pretty close to the break.

So first and foremost, he is an idiot.

But more importantly, Iran now miraculously has more time to refine nuclear material while the talks are on hold.

So, did John Kerry break his hip on purpose to help Iran develop the bomb? Of course not! His leg isn’t really broken. He is faking it. (Ok. That is for my conspiracy theory friends.)

I am sure he broke his leg. And it was nothing more than complete stupidity. But it does throw a monkey wrench in the Iran talks and gives them what they need most – more time.

And as if that were not enough, Kerry had his doctor flown to Europe and accompany him on his return flight to the US for treatment. In a military transport jet that usually carries 100 soldiers.

Kerry probably added 2 degrees to global warming on his trip back home.

A US military C-17 transport aircraft that usually carries at least 100 troops flew to Geneva Airport to pick up Secretary of State John Kerry and fly him to Boston where he’ll be treated for a broken leg.

The Air Force plane touched down in Switzerland on Monday after taking off from a US base in Ramstein, Germany, and then heading to Massachusetts after collecting the 71-year-old politician.

Kerry tweeted out ‘big thanks’ to his well-wishers and said he looked forward to getting his leg set and getting back to work at the State Department. 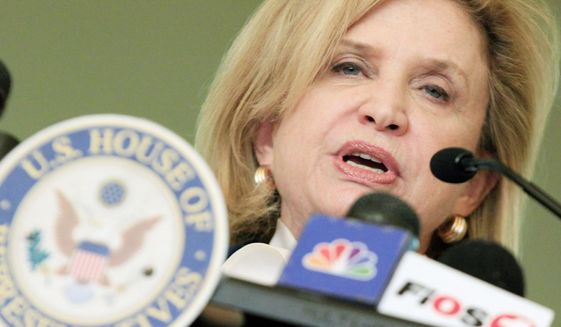 JoshuaPundit: The thing about weasels is that they love to disguise their self-serving evil as virtue, as something ‘everybody knows’ and ‘every decent person supports.’ When you hear that coming out of someone’s mouth, it’s a dead giveaway you’re talking to a totalitarian lovin’ prog fascist.

Rep. Carolyn Maloney has a bill she’s submitting in the House that would require Americans who choose to avail themselves of the freedoms given to them by the 2nd Amendment to purchase mandatory liability insurance.

“We require insurance to own a car, but no such requirement exists for guns,” Maloney said in a statement. “The results are clear: car fatalities have declined by 25 percent in the last decade, but gun fatalities continue to rise.”

Of course, aside from being unconstitutional, there are two outright lies in that statement. First, there’s no insurance requirement to own and drive a car. While most people buy it, especially if they have a vehicle of some value, Every state in the union allows a cash bond to be posted by a prospective car owner in lieu of insurance. And there is no requirement to obtain insurance when you buy a vehicle. That’s why most policies include uninsured motorist coverage.

And gun fatalities aren’t rising. They’ve been falling for some time, and are down 49% from 1993.

Ah, but here’s where the real weasel touch comes in. Guess who Ms. Maloney’s biggest campaign contributors are?

Why yes! It’s the insurance companies, who stand to make a nice chunk o’ change if this idiocy went through.

The bill is almost certainly headed nowhere, but this way, Ms. Maloney can say she tried to her donors. And may I add that this legislation, like most gun control merda taurorum is racist and elitest as well, since it discriminates against minorities and the poor whom need to defend themselves? Sounds wonderful, doesn’t it, from a privileged congress weasel with the best security money can buy – courtesy of the U.S, tax payers she wants to disarm so badly.